The tourists can only stop for a couple hours in Adelaide, disappointing the locals

Nowadays, it takes about eight hours to drive from Melbourne to Adelaide, but 100 years ago, it took twice as long by train. The players departed from the Melbourne station around 5:30 p.m., and they arrived in Adelaide at 11 a.m. -- or roughly two hours before they had to board the R.M.S. Orontes.

According to newspaper accounts, the locals held out hope that they'd be able to see one game, maybe two. The small window of time made playing an impossibility, which disappointed Adelaidians to various degrees.

The Daily Herald played it straight:

For some time past a promised visit from the members of the world-famed Chicago White Sox and the New York Giants' baseball teams has been looked forward to by all Adelaide lovers of baseball, but unfortunately a match could not be arranged. [...] The teams, whose time was very limited, much to the chagrin of the South Australian baseball enthusiasts, who up till the last minute believed that the teams would stay in Adelaide and play one or two matches. Their visit was confined to sightseeing in Adelaide.

The Advertiser, on the other hand ... 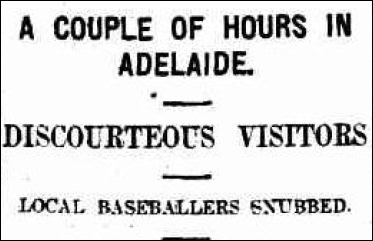 For some months the tour of the Americans had been discussed, and the correspondence which had ensued between them and the representative baseball bodies in Australia was largely responsible for the enthusiasm worked up in Adelaide. Consequently the almost icy manner of the professional baseballers when met at the Adelaide railway station made the representatives of the local league feel very sorry they had taken the trouble to welcome them.

The secretary of the South Australian Baseball League said John McGraw gave him the cold shoulder, but Charles Comiskey, against all odds, "expressed regret." Dick Bunnell, a member of the traveling party, pinned the blame on Australians.

[Bunnell] asked why we had not delayed the mailboat so as to enable them to play in Adelaide, because they had 'wasted three days in Melbourne.' 'You Australians move slower than we do,' he added. 'In Sydney we had to wait three days before they counted the gate receipts. When we have a contract in America we are paid before we leave the grounds.'

The reporter for the Advertiser was most displeased, and the Americans were largely indifferent to the questions, for they'd rather roam around the city for the two hours they had. At 1 p.m., they boarded the Orontes for another lengthy sea journey, across the Indian Ocean and back to the other side of the equator.