Excuses exhausted for Dayan Viciedo, but not hope

The Tank enters his third season as a starter with the same breakout potential, fatal flaws

Share All sharing options for: Excuses exhausted for Dayan Viciedo, but not hope

In writing about Dayan Viciedo's prospects for 2014, Cash Kruth at MLB.com gave Todd Steverson something resembling a competency check.

Although he only turns 25 in March, this year marks Viciedo's third full Major League season. Will this be the year he lives up to his potential?

"If people label you as a power guy and you only hit 10, some people may turn around and say, 'Hit .270 with 25,'" said Steverson, adding he would not consider such a season a disappointment for Viciedo.

"Not a disappointment" is just one of a few correct responses Steverson could have given to a universe in which Viciedo posts a .380 OBP (especially 70 points above his batting average). I also would have accepted:

Setting aside implausible developments, the article proposes that Viciedo's 2013 wasn't as much of a step back as it seemed because "injuries prevented him from getting into a rhythm," and he finished strong. I'm not inclined to put a lot of weight in either, because the timing of Viciedo's highs and lows don't match up with those theories.

Starting with the idea of strong finishes...

*Viciedo's first 16 games after the oblique strain represented one of the best stretches of his season (.333/.415/.500). The wheels came off toward the end of May, and he had nothing in June.

*The jammed thumb he suffered on Aug. 5 didn't change his power numbers, at least compared to the kind of hitter he looked like before the injury.

I wouldn't wholly dismiss the impact of injuries, but there's no simple cause-and-effect going on. It's probably safe to assume that inconsistent hitters don't need inconsistent physical states, but if you're feeling flippant, there's more direct evidence that injuries force him to be more patient.

No matter what, we're all intimately familiar with what's holding Viciedo back. That said, if you still want to be optimistic about Viciedo, there are other places to look besides injuries.

On Thursday at FanGraphs, Tony Blengino (the Mariners' former stat guy) wrote about the pros and cons of pulling a baseball. Basically, it's great to be able to pull the ball in the air, because that's where the power is. However, being too pull-conscious leads to a lot of grounders, and that can be game-planned against.

At the end, he points to Matt Holliday as a guy who successfully changes the shape of the field.

The guys who effectively cover the field with authority do control the dialogue. One guy who has quietly done so for quite some time is Matt Holliday. His pull ratios for all types of batted balls are below the league average, and he hit more fly balls to the opposite field than he pulled in 2013. He also happens to be in decline, though it’s very difficult to tell from his results. The authority with which he impacts the baseball, while still better than MLB average, is beginning to deteriorate, according to his hard/soft fly/grounder rates, and his ground ball pull ratio did increase a bit in 2013. At age 34 in 2014, however, chances are that he has many productive years ahead. Harvesting hasn’t even crossed his mind yet, but someday it will, and if he keeps his defense at a level where he remains viable in left field, a productive harvesting phase awaits.

Holliday brings this discussion to an interesting closing point. All around baseball, people tend to buzz about the offensive exploits of various power-hitting clubs, but the only ink received by the 2013 St. Louis Cardinals revolved around their success with runners in scoring position. Well, Cardinals’ righthanded hitters had cumulative fly, liner, and grounder Pull Ratios of 0.83, 1.25 and 2.80, respectively, not far off of Holliday’s individual marks, and much less pull-oriented than league norms. One can talk about exploiting inefficiencies in the game ad nauseam, but how about this one……use the entire field, hit the ball where it’s pitched, avoid the allure of "going for the pump" – but know how to go for it when the opportunity presents itself.

We (or at least I) can't get as granular with Viciedo's numbers as Blengino can get with Holliday, but we know that Viciedo has the ability to keep his opposite-field batted balls lower to the ground than most hitters.

Not by coincidence, Holliday has a .343 lifetime BABIP. That number is inflated by Coors Field's huge outfield, but even with the Cardinals, it's never been lower than .322. These days, being difficult to shift against helps, and Viciedo could be in a position for a BABIP advantage.

Let's end the comparison between Holliday and Viciedo here (plate discipline!). Let's continue talking about Viciedo's ability to muscle the ball to right field, because he's in the right park for it. Checking out his Hit Tracker Online data, six of Viciedo's 14 homers went the other way. None of them cleared by much. 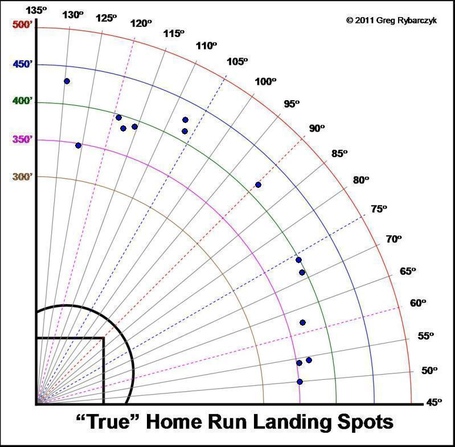 In fact, if he were in another park, most of them would be doubles at best. 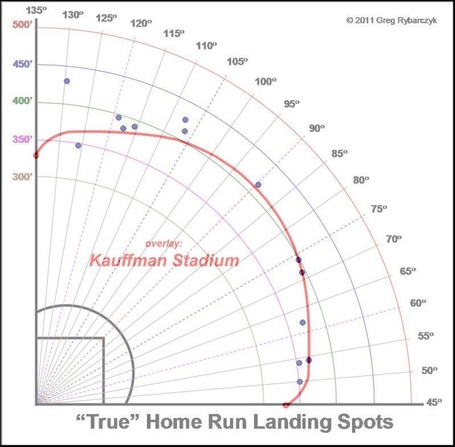 But he plays in the Cell, so line drives like this are worth four bases:

Six opposite-field homers is hard to accomplish, even at U.S. Cellular Field. For instance, Paul Konerko hit 70 homers from 2010 to 2011. Guess how many were to right field?

Four. Viciedo put more homers out to right field in a disappointing, supposedly injury-hampered season than Konerko did across his best two years.

That's why it's hard to give up on Viciedo at this point, because it's possible for him to have a productive season either by force or by fluke. And man, if he ever had good luck and a somewhat-improved approach, his strength would be a sight to behold.

The approach question is a massive "if." Pitch recognition is a problem, and it's exacerbated by a wonky trigger. And heck, even if health really held him back in 2013, he's not the best bet to stay off the DL over 162 games. The two injuries cited in the MLB.com were caused by recurring characters -- the big swing tweaked his oblique, and an awkward diving attempt left him with a sore thumb. Neither of those are going away, at least until the DH spot opens up.

Patience is wearing thin for a reason, and a little more patience is warranted. Viciedo's in a weird spot, and if a new hitting coach can't get him off the pot this season, it will be hard to find new reasons to explain it all away.