After a 15-hour train ride, the tourists arrived in Nice at 9:30 a.m. on Feb. 14, which happened to be smack in the middle of a Mardi Gras carnival celebration on France's south coast. Further more, the tourists discovered they were but a 15-minute rail ride to Monaco and Monte Carlo.

They made the casino the first stop. In the New York Times, John McGraw said the touists went on a "sightseeing tour ... visiting all the places of interest." Perhaps McGraw was talking around it for a family publication, but it could just as likely that he didn't want to talk about it. He was one of the few members of the party who returned with significantly lighter pockets.

Editor markup for White Sox and Giants in Nice. This is only visible in the story editor.

Germany Schaefer made his own fun. From James E. Elfers' "The Tour to End All Tours":

Awesome as the place was, not even in Monte Carlo could Germany Schaefer suppress his prankster's heart. Schaefer was sometimes called "Prince" by his teammates. The sobriquet was generated purely out of affection, as everyone considered him a "prince of a fellow." Upon hearing him addressed as "Prince," word spread around a gambling hall that the baseball player was actually a visiting royal dignitary. Schaefer, naturally, allowed this supposition to stand. "Immediately, there was a flurry of excitement, as Herman advanced to the table, but when he risked the fabulous sum of five francs on the red, his prestige as a scion of a royal house immediately vanished.

That spirit carried the White Sox and Giants into Nice's Mardi Gras parade the next day. They were only supposed to be spectators like thousands of other visitors, but they realized that their uniforms could pass as costumes. They schemed their way onto a few open carriages with American and French flags, and they were carted down the Avenue de la Gare, getting rained upon with confetti and throwing their own. Frank McGlynn had the foresight to take footage of this for his movie about the tour, which would've been another great thing to see.

In another article for the New York Times, McGraw opened up:

It was a gay time, and the fun lasted until midnight. Everywhere we went through the crowds the masqueraders greeted us with cries of "Les Americains." We were in the midst of the battle royal of confetti, and the ball players attracted much attention. As we were driving back to the hotel a brick fell from an arch and struck the carriage in which Steve Evans was riding. Evans remarked, "Look out, here comes some Irish confetti." 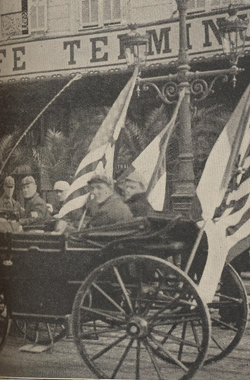 After two days of partying, the players' chief purpose for being in Europe was finally realized. They couldn't find available ground in Naples, and downpours canceled all three dates in Rome, but Nice's weather befitted the city's name. More than 5,000 fans showed up to Nice's rocky soccer field, many of them women in fashionable attire.

The Americans in the crowd were enthusiastic, but McGraw said the French found it difficult to follow the game. They did have a couple of sideshows for relief -- Jim Thorpe throwing a discus and putting a shot, and Schaefer hamming it by wearing a carnival mask to his first at-bat.

The fans who understood the action saw a great game. The Giants took a 7-3 lead through four innings, but the White Sox rallied to take a 10-9 lead into the ninth. The game ended on a thrilling note, albeit a cardinal sin as well. More from McGraw:

The game had a real exciting finish, for, with the score 10 to 9 in the White Sox favor, Jim Thorpe came up to bat, and smashed a terrific line drive to deep left field, where Tris Speaker was playing. It looked like a three-base hit, and Thorpe, running like a deer, almost got to third, when a beautiful throw by Speaker cut the Indian down for the final out.

After the game, the tourists went back to the carnival, which didn't make it easy to catch the morning train to Paris.