Nickname takes next step beyond South Side Sox by landing on Baseball-Reference.com page

Share All sharing options for: Chris Sale is "The Condor" elsewhere now

For the last two seasons -- or,, specifically, since April 17, 2012 -- we here at South Side Sox have called Chris Sale "The Condor." The esteemed Nordhagen made the case with a pair of compelling visuals: 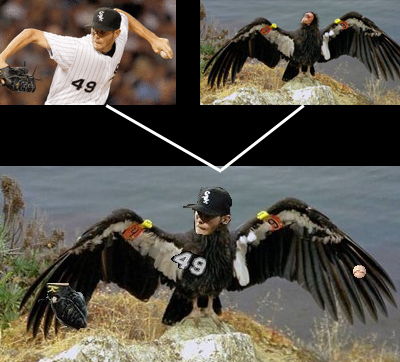 Well, Nordhagen took it to the next level by putting it to the Baseball-Reference.com test, and it passed there, too. When you look up Sale's B-Ref page, right next to "Christopher Sale" is "The Condor." Obviously a site devoted to analytics wouldn't stand in the way of science.

Just because it graduated to B-Ref doesn't mean it'll be commonly accepted. I don't think anybody calls Jose Canseco "The Chemist," and I don't ever recall Chase Utley being referred to as "The Man." And it's baseball's great shame that mainstream reports of Bronson Arroyo's signing came and went without a reference to "Saturn Nuts."

"The Condor" didn't even ring a bell over at Southside Showdown.

Baseball-Reference lists his nickname as "Condor." I don’t really hear this used very much but there is this bit of wonderment from South Side Sox commenter South Side Expat:

(That was after Ventura pulled Sale from the rotation in May of 2012.)

So it's still an uphill climb to gain wider acceptance, but this is a fine start. If it can get a foothold, it'll be the second SSS nickname to stick on the outside. That's assuming we're the source for Donny Lucy's nickname, anyway.