With the most unproven starting five in years, pitchers in Charlotte and Birmingham better be ready

Based on the comments from his superiors, Andre Rienzo will probably end up flying to Charlotte instead of Chicago for Opening Day. That's an itinerary he desperately wants to avoid.

Which is understandable. Nobody ever wants to return to the minors, but it's easier when the big leagues tell you you're not ready. Rienzo experienced enough success with the White Sox to angle for some more, but right now, he's on the outside looking in.

"Right now" is the operative term, though, because the forecast looks quite favorable for starting pitchers on the fringe.

It wasn't so long ago that being the South Side's sixth starter was akin to serving as the vice president -- technically a heartbeat away from playing a significant role, but mostly relegated to making the occasional drop-in when the president couldn't make an appearance.

Those days are gone. More specifically, they left when Mark Buehrle did, although even in his final year, the White Sox leaned on their surplus starter an inordinate amount. Buehrle's presence at least kept the starters behind Philip Humber from taking on more responsibility (they didn't even need a ninth starter that year).

Here's a chart of the innings thrown by White Sox starters who weren't supposed to have a top-five workload at the end of the season. 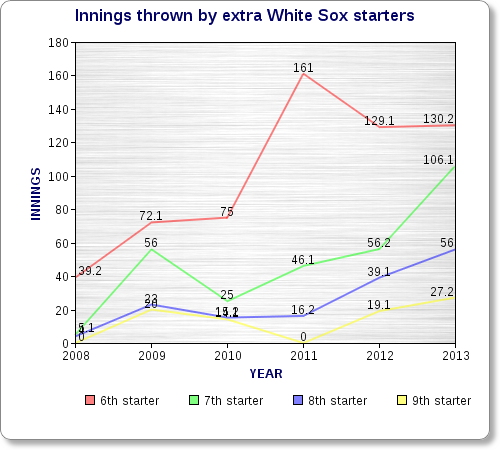 This development hasn't been good news for the Sox's pennant hopes, but it's been a boon to a number of individual careers. The Sox basically let Jose Quintana in to use the phone, and two years later he's still here. Dylan Axelrod probably shouldn't have taken so many starts away from Hector Santiago last season, but the Sox had plenty of work for both. Then came the salary dump, which opened up a spot for Rienzo, and later a taste for Erik Johnson.

When you look at the recent history of the White Sox rotation, this is the best year to wait in Charlotte since the days of Fifth Starter Hell (it doesn't hurt that the Knights open a brand new park in April, either). It's going to take an awful lot of magic from Don Cooper and Herm Schneider to keep the eighth and ninth starters down.

The innings totals over the last two years tell the story:

That's far dicier than what the Sox entered last season with, when they needed seven starters, and an eighth after a midseason trade:

So if you're Rienzo, or Eric Surkamp, or Charlie Leesman, there are plenty of reasons to stay hungry in Charlotte. It's not a bad year to be off the roster, either -- Chris Beck if he overachieves, or Axelrod if he hits the timing lottery.

It's steady as she goes for Sale and Quintana. Danks' contract dictates he starts until everybody has exhausted every reason, and Cooper has penciled in Johnson and Paulino to take the last two rotation spots. For the guys with question marks...

Last year, everybody watched Danks with one eye on the radar gun. Heck, Danks watched it, too. He said on Tuesday that 91 mph should be much easier to come by this year, which will allow him to focus on his cutter instead of pure arm strength. He'll find out if the speed readings match his feelings on Saturday.

No news is good news for Baseball America's 63rd-best prospect. Last week, Cooper said that Johnson is "penciled in pretty firmly," and Johnson's not one for saying much himself.

Coming off the more minor kind of shoulder surgery, Paulino says he feels "healthy" and like a "normal guy," so Cooper and Robin Ventura are going to let him let it fly and see where it ends up.

We heard from Rienzo at the top, but Ventura offered constructive criticism when asked about the Brazilian's chances:

"He came up early on and did great and the energy he brings and how he prepares is fine," manager Robin Ventura said. "I think he ran into a period where command just became an issue and you can't have that. Anytime a guy doesn't have command it becomes a lot more difficult for you and the team."

The Sox claimed Surkamp in late December, and Sox have presumably given him some things to work on, such as:

"It might be a little pitch here or there that you add in, a cutter or something like that."

He's starting the spring working in relief, because it's an open battle to be the next man up if Donnie Veal and/or Scott Downs can't answer the bell on Opening Day. He says he'd rather be starting if it were up to him, because he really hasn't pitch much out of the bullpen, but a job's a job.

The starter against the White Sox' starters during Tuesday's intrasquad game, Beck faced the minimum over his two innings, and all six big-league batters hit the ball on the ground. The only "damage" was an infield single by Jose Abreu, and Beck erased him with a double play.

"Beck looked good," manager Robin Ventura said after being asked about the pitching. "We had quite a few guys throwing strikes, throwing well. It’s nice to get them out there in a situation where they have fielders behind them."

Beck did what he could to achieve his goal of breaking camp with the Sox. See? Even if a pitcher is a year or two away from Chicago, this is the time to aim high.