The Tour to End All Tours: A 10-year retrospective

The author reflects on writing the award-winning book about the White Sox and Giants' trip around the world, and the people it touched

Share All sharing options for: The Tour to End All Tours: A 10-year retrospective

I want to thank Jim Margalus for his series on the 100th anniversary of the White Sox-Giants world tour. It was a pleasure helping him out and a real kick to see my book quoted so extensively. "The Tour to End All Tours" celebrated its own anniversary of sorts, and so I thought that I would take a moment and give a 10-year retrospective of things I learned since my book was published and how it has touched others. 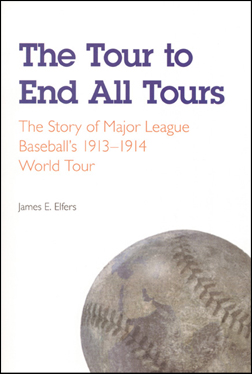 First and foremost in my list of pleasant results is the reaction of the Thorpe family. Thorpe's children had Iva's diary, but no context in which to put it. Jim and Iva had a very bitter divorce. Iva remained so angry to the day she died that she would only refer to Jim as "That man!" She cut his picture out of virtually every family photo, yet she saved and treasured the diary.

Thorpe's children and grandchildren loved my book because it gave them a picture they had never seen before: Iva and Jim in love. They also enjoyed reading about the adventures of their parents on their honeymoon. Who wouldn't want to have a report of their parents first days of love? Giving a loving Jim and Iva back to Jim's children and grandchildren made all the struggles of writing my book more than worth it.

I was also able to make Joe Benz Jr's final days quite wonderful. Joe's father, like many players of his generation, never talked about his big league career. Joe knew that his father was an important player -- the elder Benz was on the mound when the White Sox won the Series in 1917, the last untainted Pale Hose championship until 2005. Nedra O'Neil, Joe's primary caretaker, reached out to me to see if I could fill in some of the gaps in Joe's knowledge and bring him back in touch with his father in his final days. I was more than happy to oblige.

In what I call my "Vat of Stuff," all the research and newspaper articles that I complied to write my book, I found what I was looking for. Much of what I compiled never made it into my book for one reason or another. Among the things I was able to send Nedra were advertisements featuring Joe and unpublished pictures. Joe Benz Jr. became a celebrity in his rest home. He was interviewed by local papers and was very much in demand when the Sox went to the series in 2005. Joe talked about his father with new and savored knowledge. In an unbelievably classy move, the Chicago White Sox brought the championship trophy to Joe's nursing home. The pictures of Joe with the championship trophy are among my most prized possessions.

Joe died a short time after the Sox won it all. Nedra sent me a booklet she made in thanks for my efforts. She said that Joe's final years were extremely happy because he had a new understanding and love for his father. She sent me Joe's gratitude and her own. The opinions of Joe and Nedra was worth more than any advance could ever be.

But most flattering perhaps has been seeing my book cited and quoted in places I could never imagine. Two Tris Speaker biographies quoted me extensively. The legendary Charles C. Alexander used my speculation that Speaker most probably visited a brothel in Shanghai with other bachelor players as a springboard to his own assessment of what was known of Speaker's sexual life to that point! The fact that Alexander had even heard of my book floored me.

Our top stops of the tour

Our top stops of the tour Q&A with James E. Elfers

Kate Buford, wrote the definitive biography of Jim Thorpe. She cited me and used many of my same sources. I have been quoted in SABR articles and even on books about the prewar world of 1913. Winning the Larry Ritter Award was the icing on the cake. There are many stories that never made it into print. Perhaps if my book ever gets a second, expanded edition, some of those stories will get their day.

Two dreams have yet to be fulfilled and might never come to fruition. First, I would give literally anything to find a copy of the film Frank McGlynn filmed around the world. Truly priceless, this film would be important to both the film and sport historian. For example, we have no idea at this point how Jim Thorpe even moved in his prime, yet McGlynn captured him wrestling on the floor of the Roman Colosseum.

The other dream is a personal one -- I think my book would make an excellent Hollywood film. The world journey of the players would make a fantastic adventure film with hints of romance and tragedy.

Think about it: A director could focus on Jim and Iva and the injustice of the lost gold medals combined with the redemption of a world audience who knew he was wronged. There could be scenes in the Shanghai brothel and decadent Paris for the proper amount of titillation. The players could all be young handsome leading men (even the cadaverous Buck Weaver). The women could all be attractive young starlets in fetching period costume. Imagine what a talented director could do with Hans Lobert's horse race or the near-fatal typhoon. Finally, the movie-within-a-movie angle is as timeless as Hollywood itself. If my book ever does become a film, I would love to serve as technical adviser. And if I were to receive a cameo in the film, I want to be a smiling King George V at the ballgame in London.

I would like to thank Jim Margalus for all the work he put into researching the tour and bringing it to a new and wider audience. Some of his research was new to me. The great thing about the world tour is that there is always more to learn. The tour may be over but the memory never ends.