No. 2 starters brushes off disastrous outing to face the minimum over five innings, but closer candidate catches a cold

Share All sharing options for: Jose Quintana nearly perfect; Nate Jones the opposite

The Wack-A-Mole game that is the White Sox pitching staff continued to vex Robin Ventura, although he could at least enjoy the first five innings this time around.

A game after failing to retire any of the nine batters he faced in the first inning against Oakland, Jose Quintana saw the minimum number of Colorado Rockies on Sunday. He looked a lot like himself, basically -- his cutters missed on the correct side of the inside corner when they were off, his elevated his fastball when Tyler Flowers called for it, and he built favorable counts to expand the strike zone with his curveball.

So that leaves two questions, and one of them can only be answered with PITCHf/x, which wasn't available. The other one: Did he change anything?

Quintana said he did:

He and pitching coach Don Cooper made several minor adjustments in the bullpen and Quintana was able to get into a nice rhythm against the Rockies.

Quintana said Cooper stressed he get more extension on his pitches and work at a lower angle after he was nearly over the top in his previous start against Oakland.

But while Robin Ventura described Quintana's stuff as "flat" after his last start, Flowers said the tweaks didn't make much of a difference in terms of life. Still, if the Rockies' at-bats were any indication, Quintana had more than enough stuff to get the kind of poor contact he induced last season.

And then there was Nate Jones, who entered with a runner on first and nobody out in the eighth inning, and missed with his first 11 pitches. Brooks doesn't have data on the game, but if it did, it would look something like this: 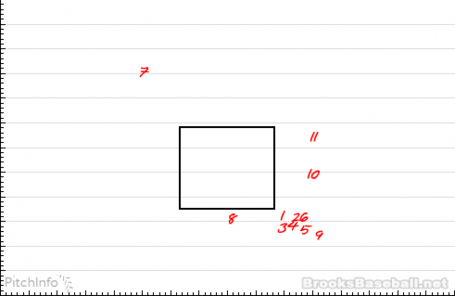 Jones had been throwing well, so it's nothing but a burp until presumed otherwise. It's just not a great 10 minutes on his closer audition tape, and while he's the running favorite for the closer job among beat writers, I can't imagine the cushion is big enough to absorb many more outings like that one.