You don't need meat-on-a-stick to show up to U.S. Cellular Field this season

A three-pound banana split in a batting helmet sounds like a lie the Mets told Bartolo Colon to get him excited about National League rules, but it's one of a number of new items available on menus at U.S. Cellular Field this season.

The White Sox unveiled them -- along with the new racers -- at The Cell on Wednesday to plenty of vein-clogging buzz, but the ones that got the most attention should come with an asterisk more than a defibrillator.

What are you most excited to try at the ballpark this year? pic.twitter.com/IyNeHcyms2

Checking these items against the list, they're only available in places where you can sit in air conditioning with tables (the club levels and suites). That makes them something like the concept cars of food -- gawk and point at the high-end experiments, and then spend more time thinking about the more accessible options.

Which brings us to bacon on a stick, a runaway favorite for most.

We know this is the photo you've been waiting for: Bacon on a Stick! pic.twitter.com/anzZCVv6mF

I don't fetishize bacon as much as novelty t-shirts suggest I should. It's good as a side, it's good as a topping, it's great as a condiment ... but to me, it's a supporting meat, not a featured player. The "on a stick" portion adds no special appeal to me as a food vehicle, either. Churros are also greasy, but wax paper does the job there.

Enough about the baconphiles (not to be confused with Gordon Beckham's fan club). Let's talk about Chris Sale-dedicated section, which should be called The Condor Nest.

To get it out of the way, they're borrowing the idea from the Seattle Mariners, who have dedicated a similar section "The King's Court" at Safeco Field when Felix Hernandez starts. 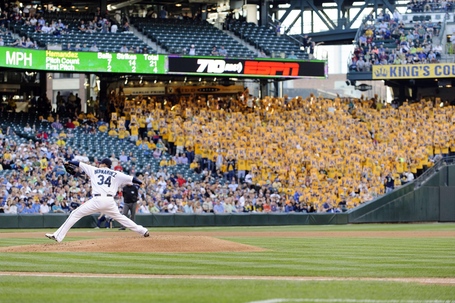 That photo -- and there are many more like it -- show why the Sox are smart to try to recreate the same vibe until it finds its own. Even with chunks of meat on sticks available for $5, Sale is still by far the best reason to buy a White Sox ticket. It's just difficult to rely on starting-pitcher schedules for advance planning, and this gives fans incentive to make themselves more available on shorter notice.

And should The Condor Nest catch on, there's room for growth on both sides of Section 154. For fans who are fatigued with the "Baseball is Labor" crutch the Sox often revisit, they now have a tool at their disposal to make the game look like actual fun.