With apologies to Allen Ginsburg

I saw the worst team of my generation, destroyed by sheer badness, a startling lack of fundamentals

dragging themselves through the six-month slog praying for a year-long mercy rule,

who scored fewer runs than every team in the American League save one franchise engineered to lose,

who stressed pitchers night after night, leaving one starter in purgatory, spoiling another's Cy Young bid, and jeopardizing a career for good measure,

who followed their captain's lead into a pit of despair, or nihilism if they were so fortunate,

who rostered the ultra-rare pitching-first outfielder for a majority of the season,

who saw Gold Glove hopes at shortstop turn to pyrite amid a league-leading number of errors,

who signed a third baseman who took forever to walk, still hasn't hit, and won't start anytime soon thanks to a surgically unrepaired shoulder,

who churned through Charlotte and Birmingham and the waiver wire, crossing fingers for lightning in a bottle and only getting blank stares in return,

who made MLB history by blowing a 5-0 lead in the 14th inning, spurring one of many silent spells to the broadcast booth,

who didn't make MLB history by blowing a 6-0 lead in the ninth inning, robbing those who witnessed the horror of even some semblance of inadvertent accomplishment,

who bungled their ways into alignments seldom if ever seen on a diamond at any level, including pre-Little League coach-pitch,

who, at the worst possible time, showed what it would look like if a golden retriever played second base,

who just couldn't pick up the damn ball on the warning track,

who just couldn't find the damn ball along the side rail, 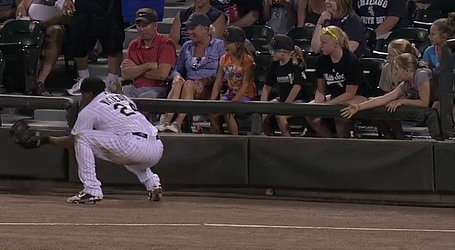 who just couldn't pick up the damn ball on the basepaths, even when the play unfolded in front of them,

who just couldn't imagined that a pitcher would try a pickoff with two outs and the tying run on second,

who made baserunning look far easier when they weren't the team doing it,

who were forced to dump the somewhat desirable salaries at the trade deadline, while counting down the days for players who couldn't sell themselves,

who will draft ahead of their crosstown rivals because they lost all four head-to-head games in pathetic fashion,

who were presented with reason after reason to tear it all down after years of putting off difficult decisions, and finally accepted their fate,

who aggressively pursued new faces from outside places in a quest to distance themselves from the smoldering wreckage,

and may have built something far more interesting far earlier than anybody thought possible.

Jose Abreu! I'm with you in Chicago

Adam Eaton! I'm with you in Chicago

Where "dirtbag" is high praise until otherwise noted

Avisail Garcia! I'm with you in Chicago

Erik Johnson! I'm with you in Chicago

Daniel Webb! I'm with you in Chicago

Marcus Semien! I'm with you in Chicago

Where you could seize the fort you're holding down

Adrian Nieto! I'm with you in Chicago

Todd Steverson! I'm with you in Chicago

Where you'll see if young dogs can learn new tricks

Matt Davidson! I'm with you in ... Charlotte