The first rule in enjoying Tim Hornbaker's Charles Comiskey biography, "Turning the Black Sox White," is to ignore the title. The book doesn't exonerate the 1919 White Sox, nor does it try to, but it's probably a marketing decision to highlight the only thing everybody knows about Comiskey's lifetime as an owner. 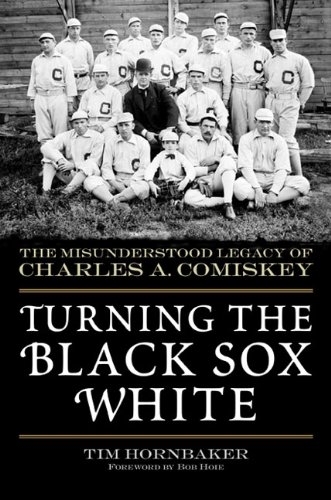 The subtitle -- "The Misunderstood Legacy of Charles A. Comiskey" -- is less audacious and alluring, but it's closer to the mark. Hornbaker does set out to diminish Comiskey's culpability in the matter, at least when it comes to the standard charges. That angle doesn't quite connect with all its punches, either, but the book does give Comiskey a whole lot more context.

The understood legacy, of course, is Comiskey as a Silas Stingy-grade miser whose legendary penny-pinching compelled eight members of the White Sox to conspire to throw the 1919 World Series. In the movie version of "Eight Men Out" (which I watched for the first time after reading this book), Comiskey is portrayed as a fatcat from a Thomas Nast cartoon. In reality, Hornbaker details that various physical issues that made it a struggle for Comiskey to stay engaged at the park and keep weight on in a healthy fashion.

You could write the physical differences as quibbles in casting, but it's a tangible representation of the divide between the two Comiskeys. Hornbaker's version isn't an antagonist, but rather a legendary figure who was ahead of his time in many regards, a man of his era in others, and behind the eight ball when it mattered most, but maybe not for the reasons we're led to believe.

The timeline of Comiskey's life plays out like a movie, in that the most noteworthy event takes place 80 percent of the way into his life. If you read the book bracing for the climactic scenes, you'll overlook the best parts.

Considering Comiskey built the White Sox, we should be more familiar with his biography than we are. Hornbaker takes us from Comiskey's roots as the son of a Bridgeport alderman who played baseball instead of abiding by his father's wishes to learn a trade. We see him from prep school in Kansas to his innovative playing and managing career in Dubuque and St. Louis, to running a minor-league club in Minnesota, then establishing the White Sox in 1900. He grows up, he builds a family, and he loses people he loves -- sometimes in rapid and tragic fashion.

Dutifully observing the passing of years leaves the book susceptible to ruts. Prior to the creation of the White Sox, the chapers are often awash in scores of games between two teams that no longer exist. After the White Sox, the seasons that didn't feature a landmark event follow a similar formula: "Comiskey made changes. He thought they improved the team, but not as much as he hoped. Then he went hunting."

The years that did feature a remarkable occurrence -- the two World Series titles, the construction of Comiskey Park, the World's Tour -- give that format some juice. And when it comes to the dominant story of Comiskey's legacy, the Black Sox scandal, Hornbaker goes the deepest, but I had a hard time making all the connections.

Hornbaker does establish Comiskey as a human through it all, which is important. Comiskey had a tight relationship with American League president Ban Johnson, and his negotiation skills played a vital role in the growth of the American League. Locally, Comiskey was a champion for the fan (he protested price increases on World Series tickets), and he made sure the writers had everything they needed. He invested money in the franchise, whether it took the form of Comiskey Park's construction and improvements, or massive sums spent to acquire star talent.

But just because Comiskey spent money on the White Sox doesn't mean he consistently paid the players a fair wage, and the book sometimes makes that tenuous connection a little too casually. Based on other examples from Comiskey's career on this site (the 1913-14 world tour, Ray Schalk's last years with the Sox), it seems as though he had an eye for eyewash, but tended to pay less attention to connections with uniformed personnel.

Hornbaker builds compelling arguments for some of parts of the White Sox payrolls. He raises fair points when he says that Eddie Collins' unusually high $15,000 salary was a point of resentment among other players, and Joe Jackson put himself in a poor bargaining position for 1919 the year before by leaving the White Sox to take a job with (and play baseball for) a shipbuilding company, giving him "essential employment" that would allow him to avoid serving in World War I. Likewise, the alleged 30-win bonus Comiskey supposedly denied Eddie Cicotte is given proper scrutiny, considering the lack of evidence the bonus existed, and the circumstances around his September pitching appearances.

But when it comes to other disgruntled Sox like Lefty Williams, Chick Gandil and Buck Weaver, it's harder to buy claims that they should have been satisfiedwith their salaries. Earlier in the book, Hornbaker writes about the way Comiskey hammered Ed Walsh during salary negotiations, which seemed to indicate the players' general powerlessness against the reserve clause. Given that precedent, it's hard to later accept the lack of a holdout as evidence that they were paid a truly fair salary, considering the lack of success the White Sox' greatest star had trying such methods.

Comiskey isn't unique for using the reserve clause to his advantage, though. And when Hornbaker provides greater leaguewide context -- owner turmoil elsewhere, payroll comparisons, the prevalence of gambling accusations before 1919 -- he succeeds in showing that Comiskey wasn't a supervillain.

Hornbaker presents a more nuanced assessment of a man who achieved immense success as an executive early on, but lost his touch as first wealth, then poor health, divided him from an increasingly divided group of players. Sticking to his guns created a rift with Johnson and other owners, which left him in a poor position to rebound from the scandal, and he had too much loyalty in the franchise's caretakers (Lou Comiskey and Harry Grabiner) to build a more effective front office from 1921 on.

How much Comiskey drove a faction of the White Sox to throw the 1919 World Series remains unresolved, and for a book that's called "Turning the Black Sox White," it seems like a fatal flaw. That's why I recommend to avoid judging the book by its title. Comiskey's life story is valuable for White Sox fans, and even if you dispute some of Hornbaker's assessments about the Black Sox, it's still entirely consistent to conclude that Comiskey allowed the situation to get away from him, and he couldn't get it back.