Both broadcasting booths concluded a call at first base should have been overturned, but the command center said otherwise

Should Robin Ventura and John Farrell cross paths before tonight's game, Major League Baseball gave them quite a conversation starter.

Ventura joined his Sox-managing counterpart in criticizing the new replay system, using similar sentiments after close calls at first base.

The White Sox ended up on the wrong end of a challenge on Tuesday night when Ventura thought Mike Napoli's foot lost contact with the bag while stretching to scoop Xander Bogaerts' throw in the second inning. You can watch the play here, but unfortunately it doesn't provide the best angle:

The Boston broadcast on NESN started its replay series with the same view from center field, and Red Sox analyst Jerry Remy said the play was "very difficult to tell on that particular angle."

Then the broadcast served up an angle the WCIU broadcast didn't have, and both Remy and play-by-play guy Don Orsillo treated it like the smoking gun.

Remy: Here's another [angle] ... whoa.
Orsillo: I don't think [Napoli kept his foot on the bag].
Remy: Nah, I think if they challenge that, I think the White Sox are gonna win this challenge.

You can see separation between Napoli's foot and the base at the first frame where the webbing of his mitt snaps around the ball. 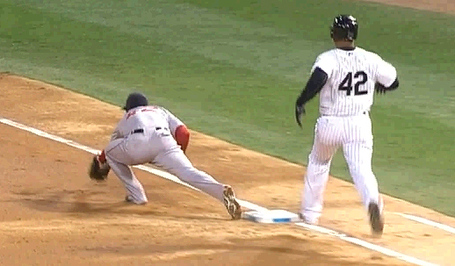 Later on, Remy said, "That view there, that looked pretty obvious." But it wasn't obvious to the replay center in New York, because the original call was upheld.

That didn't sit right with Ventura, who is now 0-for-2 when challenging calls:

"I'm not doing too good on those," said Ventura with a wry smile. "You look at the replay, you see what you see on the field. ... I haven't seen the replay yet.

"But I know what I see on the field and then what everyone else sees on the replay. Having trust in it is getting pretty hard right now. Even looking around the league, it's a coin toss if you are going out there."

The part of the quote I emphasized almost matches what Farrell said after he was ejected from Sunday's game against the Yankees. In that case, which umpires overturned a double play the Red Sox originally had completed, and the decision hinged on the definition of a catch:

"The frustrating part is when this was rolled out and explained to us, particularly on the throw received by the first baseman, we were instructed that when the ball enters the glove, not that it has to hit the back of the glove, is where the out is deemed complete. At the same time, any angle that we looked at, you couldn’t tell if the foot was on the bag behind Mike Napoli‘s leg. Where this became conclusive is a hard pill to swallow. On the heels of (Saturday), it’s hard to have any faith in the system, to be honest with you."

Tony La Russa, who is one of the designers of the replay system, said the moment of the catch is "when the ball hits the back of the glove." That didn't seem to work in Ventura's favor on Tuesday.

If Farrell's words are any precedent, Ventura could face some form of punishment. Joe Torre, MLB's executive vice president of baseball operations, said Farrell will be receiving a fine:

"I’m not going to suspend him. It will be a fine," Torre said of Farrell. "I’m sorry about what he said. What I try to do in whatever I do in this job that the commissioner has imported me to do, is basically never forget what it’s like to be a player or a manager.

"Part of that never forgetting are the feelings, especially when you’re dealing with Red Sox-Yankees games. There is nothing that is insignificant about anything that happens in those games," added Torre, who would know.

It'd be a real kick in the junk if Ventura were suspended for having the audacity to manage in a game that didn't feature both the Red Sox and Yankees, but we'll cross that outrage bridge when we get to it. In Ventura's favor, Farrell was also ejected for arguing the reversal, whereas Ventura remained in the dugout, doing his damndest to channel his contempt into pity:

The review took two minutes and 15 seconds of a 2-1 game that lasted three hours and 36 minutes, and there has to be a more efficient way -- especially when both booths draw the same conclusion. Perhaps the replay center should go audio-only without telling anybody, and if there isn't a consensus between broadcasters, they can pass along the decision to an impartial MLB Fan Cave dweller. Bud Selig can still say they called a place in New York with lots of screens, and nobody would be the wiser.