Rookie catcher has difficulty receiving power arms, so the White Sox are keeping it simple with the starter

Tyler Flowers caught a day game after a night game in Texas this weekend, and he showed no signs of fatigue on the back end Sunday. He went 3-for-4 with a walk, was 1-for-2 throwing out basestealers, and he deserved hazard pay for catching Erik Johnson.

Flowers says he wants to be more than a stopgap, and games like that one certainly make the notion a little more believable.

"Ideally I would like to catch 130-plus games,’’ Flowers said. "One-forty may be a stretch. I’m sure everybody wants to do that like Russell Martin and [Brian] McCann used to do. That’s pretty good.’’

Right now, Adrian Nieto is tethered to John Danks and only Danks. It's a combination that dates back to spring training:

The pairing began with Danks' first start of Spring Training, and it is unlikely to change until further notice -- not that Nieto knows why he and Danks have worked together so well.

"No idea," Nieto said. "I guess something just happens, you know. I came up to him one time after the first time I caught him and I asked him, 'Is there anything you're looking for me to do for you catching-wise or stance-wise?' And he's just like, 'Nah, man, everything you do back there. You move well, give a good target and stuff like that.' So I guess it's just something that clicked from day one."

My guess as to why they're an item? Well, of all the starters, Danks is probably the easiest to catch. He throws the softest, relies least on sharp breaking balls, and tends to have good control.

We've seen what happens to Nieto when relievers who stray from those traits take the ball, and thanks to Baseball Prospectus, we can now quantify it. Its stats toolbag now includes catcher framing numbers by batteries, and you can see the difference between Flowers and Nieto when the bullpen gets involved.

This came into play during the eighth-inning bullpen meltdown against Boston on April 16, when Cleto's third walk featured three strike-looking pitches out of five. 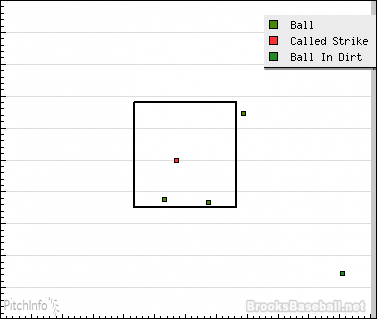 And here's the second:

In both cases, Nieto set a low target, Cleto had the Y-axis right, but Nieto's mitt still got taken along for a ride.

We see this more so when Nieto catches Belisario. The numbers and visuals say is Nieto's toughest assignment, and it's all because of the sink. Sometimes Belisario adds a little degree of difficult to it (this should have been a strike):

And sometimes it's all Nieto:

It's hard to blame Nieto for this, though. When he talks about the difficulty in adjusting to pitchers as a hitter jumping from High-A ball to the big leagues ...

"I was telling [Dayan] Viciedo on the bench last night, I was like, 'The ball moves up here so much more than it does in A ball.' And guys can throw both pitches to both sides of the plate. You don't see that in A ball. If you see a guy who throws a curveball in A ball, he ain't going to be there long because guys really can't even hit that at that level."

... this also describes what he's dealing with as a catcher. On a normal developmental path, he would gradually see a wider variety of movement as he moved up the ladder. There aren't many Belisario sinkers or Cleto fastballs in the Carolina League, and he's doing what he can to catch up:

Nieto played in his sixth game this season Wednesday and spends a lot of the rest of his time studying. He said he makes his way to the bullpen every game in the fifth or sixth inning to catch the Sox relievers to get a better feel for their tendencies.

"I try to catch as many guys as I can," Nieto said. "I'm always trying to get better and get more reps, and the more reps I get, the easier it will be."

He's just trying to cram a couple years' worth of reps into a much smaller timetable, and the results bear that out. Catching a guy like Danks makes the first two-thirds of the game easier on Nieto, but when an erratic group of high-octane arms come in, it's much more difficult finding a working combination, and games can turn on it.

Flowers is providing a ton of cover for his backup with his BABIP masterpieces. Look at the hit-eating grin on his face after his third single on Sunday: 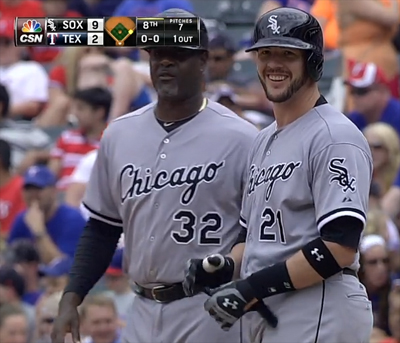 Ss long as he starts 80 percent of the time with the way he's playing right now, the Sox won't have to make a decision on Nieto. But if circumstances dictate that Nieto has to play outside of his prearranged schedule -- imagine him having to catch Chris Sale for the first time -- Robin Ventura probably won't be able to talk around the challenges so easily.