League-leading hitter might just be having a hot first few weeks, but there's some reason to believe he figured things out

In case Dayan Viciedo's metamorphosis into a selectively aggressive dynamo is fleeting, let's lock this moment of time in place with a few freeze frames of his game.

No. 1: He's atop a leaderboard ... that isn't walk percentage in reverse order. 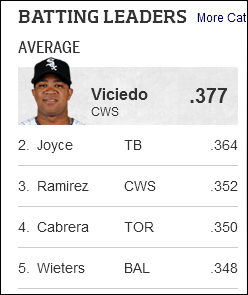 Viciedo went 3-for-4 on Thursday with a double, triple, and single. The triple might've been a gift from Torii Hunter, but as you'll see, Hunter owed him something. By that point, Viciedo had already extended his hitting streak to six games. He's just 14-for-24 over that stretch, instead of a more pedestrian 13-for-24.

No. 2: He's still spraying the ball around.

Back in January, I wrote a post comparing Viciedo to Matt Holliday -- not so much because they were both accomplished hitting masters, but because they both had the ability to hit a variety of batted balls to all areas of the fields. Holliday's ability to make square contact in all directions prevents defenses from shifting against him, and the end result is a .343 lifetime BABIP, which is a boat-rising tide as long as the strikeouts aren't ridiculous. My theory was that Viciedo could hit his way into a similar kind of success, albeit to a lesser degree.

A first glance at that chart shows a pretty balanced approach, and that's about all you can glean from it right now, because you can't get all that granular with a three-week sample. It looks like he's bunching up his grounders a bit more than usual, but on the flip side, he's hitting far fewer grounders to begin with. He entered the season with a ground ball rate of 50 percent. So far this season: 36 percent.

That's a tradeoff that's going to benefit Viciedo if it keeps looking like something like the first three weeks. It's one thing to be unpredictable with grounders. It's another thing to roll over grounders to the left side, and throw the bat at outside pitches for harmless bouncers to the right. He's still going foul line to foul line with his best contact -- there's just more of his best contact, and it's staying in the air.

Viciedo is off to this blazing start even though pitchers are trying to prey on his weakness. He's seeing far fewer fastballs (48 percent, down from 54 percent over his career) and far more sliders (25 percent, up from 18 percent) than usual, yet all his plate discipline numbers have found the right directions.

The most noteworthy number -- out-of-zone swing percentage. In 2013, Viciedo swung at 42.5 percent of pitches out of the strike zone. Entering Thursday, he cut that number down to 34.1 percent, while maintaining his contact numbers everywhere else. You'd be surprised by how much weight you can lose by drinking water instead of pop, and Viciedo's discovered the hitting equivalent.

Todd Steverson says there might be an epiphany going on:

"We have enough technology nowadays to put in front of your face and say, 'Hey, this is where you get yourself out and this is where you do damage.' You start to believe it," Steverson said. "You can't run from yourself. Once you own up to what you have been really, what your downfalls of your negativity in this game have been, and try to make a change to it, then that's step 1."

Take that quote, and add it to Viciedo's observation about seeing more sliders. If that light bulb stays on and the rest of the league remains slow to believe it, it's clobbering time.

Between flat-footed throws, poor angles and unwise risks, Viciedo gave up several bases to the Tigers out in right field. Two notable examples -- turning a Hunter single into a double on Monday ....

... and turning an Austin Jackson single into a triple on Thursday.

These miscues are a little more tolerable when Viciedo hits. At least he's bringing something to the table, and if this improved approach is here to stay, the Sox have ways to reduce his defensive duties in 2015.

That said, I wonder if the Sox would be better off putting Viciedo back in left. His routes and throws might be a little better in the other corner because he's used to them. And even if he isn't, bad angles like the one he took on Jackson's liner end up being doubles instead of triples.

Maybe Alejandro De Aza doesn't like playing right, and if so, then that idea's probably a non-starter. As long as Viciedo keeps hitting like a deserving starter, that's a problem the White Sox can live with while the roster shakes out.