Rookie didn't need offensive support to find groove in debut, but it certainly took the edge off later

On one hand, Jose Abreu ... my goodness. He already seized the April rookie home run record when he hit his ninth on Friday, and he separated himself from the pack with his 10th on Sunday. On top of that, his four RBI unlocked some other rookie and franchise accomplishments, which Doug Padilla itemized:

--Abreu’s 10 home runs are the most by a Chicago White Sox rookie in any month.

--Abreu’s 31 RBIs set an MLB rookie record for March/April, as he broke out of a tie for the top spot with Albert Pujols.

--Abreu tied Zeke Bonura’s mark for most home runs through the first 26 games of his career. Bonura did it in 1934.

--Abreu became the first player in MLB history to have four games with four or more RBIs in his first 26 games.

As much as Abreu commands the spotlight, though, he had to yield some of it to Scott Carroll. Here's some game recognizing game:

"We're all together. We are very happy. I feel like the whole team contributed," Abreu said. "Just getting to know the process and the steps that Scott has had to take to get here, it's a great thing and well deserved."

It really is a helluva climb for Carroll, who took advantage of a calamitous series of events above him and made the most of his biggest moment yet. The 29-year-old rookie held the Rays to one earned run over 7⅓ innings, leaving to a standing ovation. Along with the cheers were tears from his mom, and perhaps some other members of Carroll's 36-member pep band.

Robin Ventura probably had to suppress overwhelming joy of his own, mostly because one of his starters pitched into the eighth inning and barely broke a sweat. He certainly sounded appreciative, anyway:

"I mean, it starts with what Scotty did today coming in, and it’s special," White Sox manager Robin Ventura said. "You have a guy that gets his first opportunity in the big leagues and takes advantage of it. At 29, being up there, it’s special. He was throwing strikes, ground balls. Even when guys got on, he had a sinker that you can use to get double plays and get out of innings. It’s big. He showed everybody what it’s like when you throw strikes."

That last sentence packs a little punch on the heels of Erik Johnson's demotion to Charlotte, which opened the rotation spot up for Carroll. Johnson walked nine guys over his last 6⅔ innings, and that last dud start really put Ventura and the other pitchers in a bind.

That said, it's also a little simplistic. Charlie Leesman threw plenty of strikes in his only start on April 22, walking just one of the 17 batters he faced. The problem was that he could really only throw one kind of strike, and once the Tigers locked in on it, it was all over.

While Leesman ran into a wall the second time through the order, Carroll passed through with ease. The reason is most evident in his velocity chart: 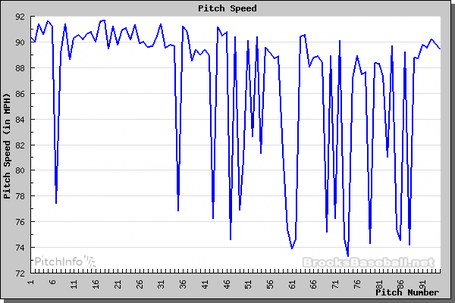 With the exception of the curveball he dropped on Desmond Jennings for his first MLB strikeout, Carroll didn't have to dip into his offspeed offerings until his second time through the lineup. As a result, Carroll could give the Rays what Leesman couldn't give the Tigers: a second look.

Beyond the additional mix of curves, though, the Rays allowed Carroll to keep it simple. He left a lot of pitches up in the zone, but thanks to the natural movement of his sinker, they could only hit the top half of it. Moreover, the Rays never saw how Carroll responded under duress. He only pitched to three batters with a runner on second, and he never encountered a runner on third.

As the league gets more video on him and a better feel for that sinker, hitters will probably force him to be finer with command, and that's where we'll really get an idea of how long he can last. But give Carroll an immense amount of credit for taking charge of the game. He forced the Rays to provide the trouble instead of nibbling his way into his own undoing. They had to swing the bats, and they couldn't square him up.

Carroll provided a nice refresher course for other pitchers, even if the lesson isn't all that simple. Leesman's start showed a guy can't live on just strikes alone, but Johnson showed that it's far, far worse when you don't even throw them in the first place.