A look at Matt Lindstrom's cutter

Matt Lindstrom had a good day on Monday. He was announced as the closer, started the season with a save, and debuted his new pitch - a cutter.

Share All sharing options for: A look at Matt Lindstrom's cutter

Throughout the spring, we heard all about Matt Lindstrom's oblique injury and the effect it had on the closer competition. In the end, he was declared the winner Monday morning. With all this spring drama, I missed something in all the stories. Matt Lindstrom throws a cutter now.

Throughout his career, Lindstrom has relied most on his four-seam fastball, slider, and sinker with a rare changeup. Like a lot of pitchers, Lindstrom's fastball has lost some velocity, falling from the 99 MPH range in 2007 to just below 96 MPH last season.

Like a lot of those aging fastball pitchers, Lindstrom has now turned to the cutter to make up some of that velocity loss with more movement. He debuted his cutter with his second pitch of the of Monday's game, getting Josh Willingham to swing at it for his second strike. For the inning, he threw it four times, getting two whiffs and a foul while Trevor Plouffe watched one go by for strike one. Plouffe's at bat might become a typical sequence for Lindstrom this season. 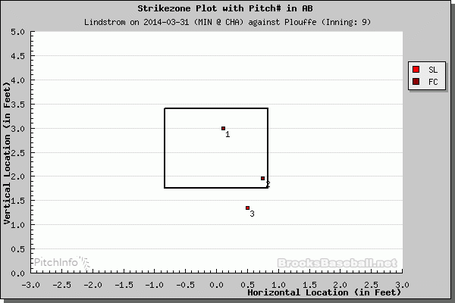 The cutter and sinker are also thrown identically with a very similar grip, but with very different results. While a cutter breaks away from right hander like Plouffe, a sinker breaks down and in. Overall, there was about a eleven inch average difference in horizontal breaks between the two pitches in game one. If the Twins had as little scouting on Lindstrom's cutter as I did, Plouffe might not have even known he had one and was probably surprised when the first pitch broke away from him instead of missing inside. After showing off the cutter on the first pitch, Lindstrom put a second on the outside corner that Plouffe swung at and missed. Now up 0-2, Lindstom finished him off with a slider low and out of the zone for the strikeout.

With only a single appearance, four cutters thrown, and an element of surprise, small sample size warnings abound. If Lindstrom can continue the command with the cutter that he's shown in game one, it could be a very valuable addition for Matt Lindstrom and the White Sox.