In a terrific article by Christina Kahrl on ESPN.com, Paul Konerko remarked on the strange reactions Chris Sale elicits from hitters -- especially ones that should have the advantage.

"I don't think I've ever played with a lefty with as good stuff as him," White Sox veteran Paul Konerko said. "I've seen Chris throw sliders to righties … usually when a guy buckles, it's a lefty getting it over against a lefty, but he does that to right-handed hitters, and you don't see that much. It's like a [Justin] Verlander curveball to a lefty. He knows how to make right-handers feel uncomfortable because he can come inside on them. He's still young, still getting better, but on the days he doesn't have his best stuff, he still gets people out, which shows a lot of maturity."

We saw this last year in a start against Detroit, as Sale lured not one, but two different right-handed hitters into swinging strikes on sliders that plunked their back legs. And one of them was the league's best hitter. As I wrote in that post, I'd seen hitters swing on pitches that hit them, but never twice in one game.

On Sunday, Sale drew another ... unique ... reaction from a right-handed hitter.

This time, however, he did it with his fastball.

Sale took the mound in the bottom of the sixth after Jose Abreu took a James Shields fastball square on the elbow. Abreu was drilled in the same spot the day before, and the second one hurt worse than the first. Morever, Avisail Garcia had also taken one for the team earlier in the game. In total, the Royals had plunked four hitters over 2½ games, whereas the White Sox pitchers had only issued one HBP on Friday.

Apparently, Sale wasn't too pleased about Shields' inside pitching, which Omar Infante was about to discover when he came to the plate as the inning's leadoff hitter.

OK, so the first pitch was a little inside.

OK, now Infante's starting to realize something's up, starting with a glance back at Tyler Flowers.

So when Sale unleashes the third pitch, Infante is more than ready for it.

I'm not going to sit here from my desk chair and say Infante should have made himself available for a 95 mph kneeburger, but he actually did Sale a solid by bailing out that early. None of the Royals' leadoff hitters reached base in the first five innings, and a free baserunner at that time could have hurt the Sox in a scoreless game. We've seen the problems plaguing Sox pitchers with the dreaded leadoff walk.

Instead, Infante returned to the batter's box after home plate umpire Greg Gibson issued warnings.Although Sale would have been booted with one more inside pitch, Infante must have thought he was crazy enough to do it.

That's the reaction I hadn't seen. At least from a non-pitcher.

After that, Infante was ready to hit, and maybe overly so. Sale came back with another inside fastball, but Infante swung and could only pull it foul. That made it a full count and put Infante in protect mode. He reached out on a changeup off the plate and tipped it back to the screen, and when Sale came back with an inside-corner fastball, Infante could only roll it to short for a routine 6-3.

The pitch chart from Brooks is a fun one: 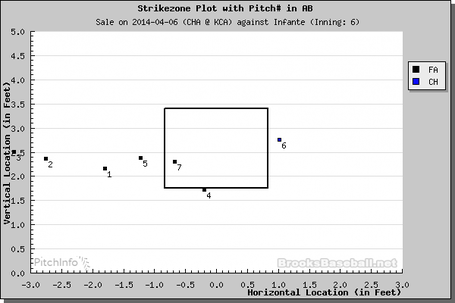 The game turned on that at-bat to some degree. We do know that the Sox benefited from the lack of a baserunner. Conor Gillaspie committed an error on the next batter, and the Sox's challenge on an apparent double play was foiled by the replay center in New York, giving the Royals either one or two extra outs. Sale calmly executed pitches under the circumstances, getting one unremarkable ground ball after another, and even when he fell behind Billy Butler 3-0, he came back with two strikes. He didn't need a third, because Flowers gunned down Eric Hosmer at second to end the inning.

And that's where you can start to speculate on a greater effect of that Infante sequence, because it definitely took the intensity up a notch. When Shields came to the mound to start the seventh, he had a conversation with Gibson about the warning, and the Royals booth said he probably wasn't pleased about facing potential consequences on an inside miss. The White Sox finally broke the scorelessness that inning.

Are those events connected? Hard to say, but I think it can be said the White Sox didn't lose anything by triggering the warnings. Hell, judging by Alexei Ramirez's reaction to his great play on Butler to start the seventh ...

... it may have served as a call to arms. Not that Sale would be the one to say it: