Everything's in play with Jose Abreu

He still hasn't drawn an unintentional walk, mostly because he hasn't wasted strikes

Share All sharing options for: Everything's in play with Jose Abreu

Between spring training and the regular season, Jose Abreu has come to the plate 90 times and drawn only one unintentional walk.

He's not getting any closer, if the last two games are any indication. Abreu has seen just 15 pitches over eight plate appearances, and in seven of them, he only needed to see one strike.

Let's take those seven plate appearances -- the first three on Sunday and all four on Monday -- and place them all into one Brooks chart. You'll see it's not particularly cluttered. You'll also see that Abreu isn't necessarily doing anything wrong in any given at-bat. 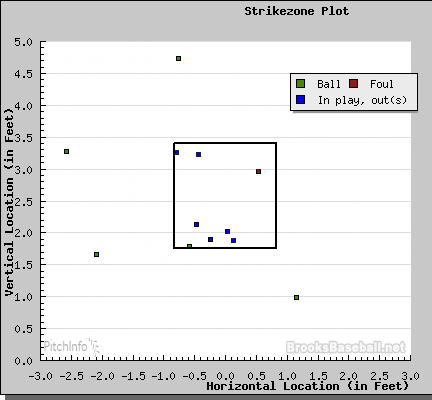 In these seven plate appearances, Abreu has seen 12 pitches. Each time he swung, he swung at a strike. Each time he swung, he made contact. And out of the seven times he's swung at a strike and made contact, he put the ball in play six times. This is pretty much Todd Steverson's "selective aggression" mandate distilled to its purest form (which probably wasn't the way it was meant to be consumed).

He isn't walking, but he isn't not-walking the way Dayan Viciedo didn't walk, or the way Josh Phegley didn't walk. With Abreu, the question isn't so much, "What is he swinging at?", but "Maybe he could've waited for a better strike?"

That second question is harder to answer, but it's a better problem to have. One potential answer: If you look at that map, you'll see only one pitch that qualifies as "up and over the plate," which he fouled back. His two hardest-hit balls of the season came off pitches on the outer half of the plate and up, and maybe he could give himself a better shot to see one of those:

But maybe these other strikes are also his pitches to some degree, and better results are in the offing. We've seen his plate coverage, and we've heard all the reports of his ability to adjust to how he's being pitched. If his bat-to-ball skills are truly above-average, he may hurt his chances of walking simply because he doesn't extend at-bats with whiffs and foul balls.