You wouldn't know it from the final score, but at one point, this game offered some genuine intrigue.

With one out in the sixth, Brandon Barnes hit a line drive that rattled in and out of Conor Gillaspie's glove for an infield single. Troy Tulowitzki then pulled a double into the left-center gap to drive in Barnes, narrowing the Sox's lead to 4-2. It was the kind of bad break that Jose Quintana's many, many, many no-decisions are made of.

So how did the White Sox end up winning this game by 12? It all turned on one dramatic at-bat by Jose Abreu in the seventh inning.

Abreu came to the plate after Adam Eaton let a pitch graze his elbow armor and Marcus Semien singled. Walt Weiss went to the bullpen to bring in righty Chad Bettis. He and Abreu were even after four pitches. They were even after 10 pitches, because Abreu fouled off the next six.

After Bettis missed with a fastball to load the count, he tried springing a 77-mph curve on Abreu, the first one he'd seen during a 12-pitch sequence. Abreu's lower body started early, but he kept the bat back and golfed a majestic fly ball just over Barnes' outstretched glove. His first major league homer gave the Sox a 7-2 lead.

At that point, Abreu's homer was the White Sox' third of the game. Before the end of the game, they doubled that total, Abreu doubled his, and the team scored more runs tonight than they did in any game during the 2013 season.

You may as well soak in the box score. 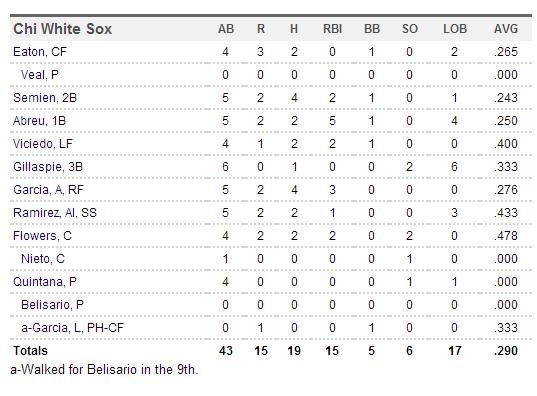 *Avisail Garcia got the party started with a solo shot off Franklin Morales in the second. He and Abreu became the first White Sox teammates to share a multi-homer game since Juan Uribe and Paul Konerko each hit two against Philadelphia on June 8, 2004.

*While Abreu's first homer might have been aided by altitude, the second homer -- a bullet over the wall in right-center -- would have left any park. And before the blasts, he drew his first unintentional walk, too.

*Tyler Flowers also hit his first homer of the year, a two-run shot on an inner-half slider to give the Sox a 3-0 lead. Alexei Ramirez added the other blast, a solo shot off woeful Wilton Lopez in the eighth.

*And to think -- the White Sox hadn't homered in four straight games before tonight.

*The onslaught overshadowed a perfectly good pest game by Eaton, who went 2-for-4 with a walk and the HBP. He also drew a balk, swiped third on the front end of a double steal, and thought about stealing home on some eephus-like intentional balls.

As a result, Jose Quintana received five games' worth of run support. He only needed 86 pitches to throw seven innings, allowing the two runs on five hits and two walks while striking out four. The Rockies did make some loud outs towards the end of his outing, but the Sox' bats were a mite louder.