Jose Abreu, Avisail Garcia, Marcus Semien and Adam Eaton all give their stats a much-needed boost

Jose Abreu crossed three "firsts" off his career list during the White Sox' 15-3 thrashing of the Colorado Rockies at Coors Field on Tuesday night.

First unintentional walk: In his second at-bat, Abreu came back from a 1-2 count to watch three straight out of the zone from Franklin Morales, the last two curveballs.

First home run: After seeing six pitches all of Monday, Abreu made Chad Bettis throw a dozen in the seventh, and Abreu took the 12th and final pitch over the left field fence.

The White Sox dugout tried giving him the silent treatment, but his teammates weren't successful in suppressing their excitement:

First multi-home run game: On Monday, I theorized that Abreu should try to wait for a fastball up and out over the plate. After taking a strike and fouling one off, Wilton Lopez threw him an 0-2 mistake in that exact spot. He thrashed it. He thrashed it good.

After the game, Robin Ventura said he thought Abreu had been trying to ambush pitchers for a breakthrough hit. Abreu echoed the sentiment, and said some over-the-phone consultation from his mother put him back in his old frame of mind.

He isn't the only one feeling relief. Four White Sox players improved their lines dramatically with huge games, and nobody more than Avisail Garcia:

Garcia had a monster game, going 4-for-5 with two homers, and he might've had a five-hit night if it weren't for that meddling Nolan Arenado.

The best part abut this one? Both his home runs went to left field, and both on inside pitches. Here's a plot of the pitches he turned on: 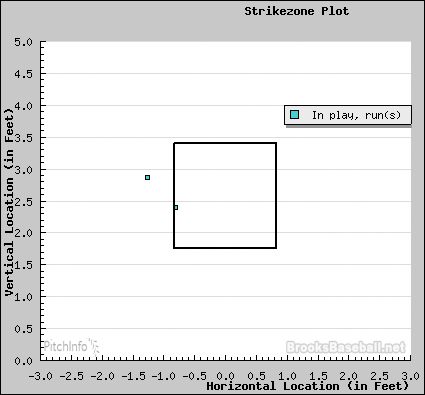 And while the second homer off Wilton Lopez was off the plate inside by several inches, the one against Franklin Morales has a greater degree of difficulty when considering his track record. Last season, Garcia really couldn't get the barrel of the bat out and around on left-handed pitchers, as his spray chart shows:

The dot that represents the homer off Morales will start filling in that gap, and that's what Todd Steverson wants to see. It's great that Garcia can use right field, but when you look at his line against lefties last year (.219/.256/.384), it suggested that his inside-out swing wasn't the best use of his strength. After pitch recognition, self-induced jamming on inner-half pitches is probably the next biggest obstacle between Garcia and The Next Step. More beautiful, ferocious swings like the one he put on that Morales slider, and we won't have to worry about it so much.

As for the other two hitters:

Semien: After a four-hit night, Semien's season line pretty much matches Gordon Beckham's last four seasons (.244/.306/.364). If Semien can improve on it, even modestly, before Beckham can come back from an oblique strain, it's going to make for some awkward conversations.

Eaton: I don't think anybody was complaining about his approach, but a .350 OBP seems more indicative of the quality of his plate appearances.