Actual Reading Room: What are you reading?

I recently finished "Up, Up & Away," an account of the existence of the Montreal Expos. How about you?

Share All sharing options for: Actual Reading Room: What are you reading?

Seven weeks into the season, the White Sox are enjoying just their third off day -- and it's hard to count the first, since the Sox had to leave the day after Opening Day open. They've somehow managed to play 21 games in Chicago without having one postponed, and the Rockies are the only other team to have played 42 games so far.

So, since we have a rare break in the action, let's talk about books for an afternoon.

Under ideal circumstances, I try to keep my reading diet balanced by alternating non-fiction and fiction. When my blog-related reading piles up, I have to resort to a baseball/non-baseball rotation. 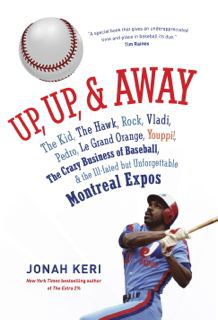 And in some cases, I can't even stick to that. After finishing "Turning the Black Sox White" so I could review it here, I broke my rule and cranked through Jonah Keri's (personal) history of the Montreal Expos, "Up, Up & Away." I had just gotten my first (and last?) taste of Montreal baseball, so I wanted to read the book while my own impressions were still fresh.

It's a good one, and I'm not just saying that because Keri's a friend of the South Side Sox Podcast. "Up, Up & Away" shares key qualities of two of my favorite sports books.

One of them is "Crazy '08," Cait Murphy's rollicking recreation of the insane pennant races during the 1908 season. Baseball's a form of entertainment, and most of its history isn't a life-or-death matter, so I like getting a healthy dose of voice underneath the timeline if it offers the opportunity. The history of the Expos is equal parts turbulent and wackadoo, and the pain and the joy is quote evocative.

Take Olympic Stadium. Physics-defying architecture aside, it was a terrible deal for the city and its baseball fans from the start, and Keri lays out all the problems both in both dollars and senses. But he also makes you want to be in the worst stadium possible in the worst way possible in 1979 with passages like this:

For the many fans who travelled to Olympic Stadium by Metro, the entire walk-up experience became electric. Exiting at the Pie-IX stop (pronounced pee-neuf), you would walk shoulder-to-shoulder with thousands of fans from the subway car, through a tunnel, and up a ramp leading directly to the stadium entrance. The second you passed through the turnstiles, you found yourself in the middle of a big party, loud and raucous (but not too raucous) and inviting. Straight ahead was a beer garden, flanked by an Oompah band with the volume at 11. In a city that had French as its main language and English as number two, the whole setup felt surprisingly like Oktoberfest, right down to the music. You could count the number of people who knew all the words to "The Happy Wanderer" on one hand as you wandered to your seat after a beer or five, but every living soul in the ballpark knew the chorus. And whether it was pre-gaming in the concourse or celebrating a big Expos rally with the help of Fern Lapierre's booming organ, that chorus echoed through the building's cavernous expanse.

Grantland's Jonah Keri joined us to chat about the White Sox and Expos.
SUBSCRIBE: iTunes | SoundCloud

And that brings to mind another favorite, Ken Dryden's "The Game." There isn't a market like Montreal anywhere else in North American professional sports. It can feel quite exclusive if you don't speak French (and I don't), and its idiosyncrasies pose all sorts of curveballs, obstacles and challenges. Dryden, who was the Montreal Canadiens' goalie during their dynasty in the 1970s, wrote about the culture and politics eloquently as a civic-minded outsider from Ontario.

Keri, a Montreal native, picks a different route, using his childhood experiences to make the foreign relatable -- describing the chic faction of the fan base, or the way the French broadcaster had to create an entire baseball lexicon for his audience (frappeur désigné for designated hitter, balle papillon for knuckleball, etc.). He drops into the first person from time to time for a story that accompanies the era, which is sometimes jarring after some sober analysis, but ultimately effective.

If I weren't a semi-frequent visitor of Montreal, it's possible that I might not find the descriptions of the city's culture as interesting. But I am, and I do, so take what you will from that disclosure. Either way, the book always comes back to baseball, and that's plenty fascinating even if you have no plans to ever set foot in Quebec.

Hey, what are you reading?

I'd say the book talk is going to be a regular feature, but I just started Doris Kearns Goodwin's "The Bully Pulpit," and at 750 pages, who knows when I'm going to be able to finish it.

That said, don't let me stop you from getting more good recommendations because I'm wedged between Roosevelt and Taft. We're a literary-minded bunch here, so share what you enjoyed reading and get more ideas in return.