The way the White Sox-Royals game ended was plenty weird, but should it have been even more unusual?

Before I write the full-blown recap, here's a question for you: Should tonight's game actually have ended on a pickoff double play?

If you missed it, with Jarrod Dyson on second and Alcides Escobar at first, Jake Petricka picked Dyson off second. Dyson headed to third and induced a throw, and then Marcus Semien ran him all the way back to second, where Escobar was standing after advancing.

Here's the end of the play:

Second base umpire Tom Hallion doesn't actually call Dyson out until Semien tags him coming back to second base from the first-base side. There's just one problem:

Escobar is already standing on second. In fact, he's on there with two feet as Dyson steps on the first base side of the bag. 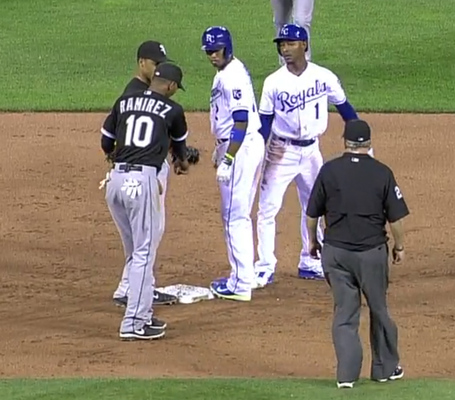 At this point, since the trailing runner is ahead of the lead runner, it seems like he should be out automatically, according to Rule 7.08(h):

Any runner is out when --

(h) He passes a preceding runner before such runner is out;

I don't think it matters that Dyson passed Escobar going the other way -- once Escobar was technically on the lead side of the runner ahead of him, it seems like he should've been out automatically. Then when Semien tagged Dyson before his foot hit the bag, he should've been out, too.

The only reason I'm not positive is because Escobar is on a base while Dyson passes him. But as Hallion's call showed, it was still Dyson's base because a force play didn't move Escobar to second. Dyson was still a live runner, so shouldn't Escobar have been called out for being ahead of him?

(Unless Escobar had the right to the base after Dyson passed him, and Hallion's reaction time was such that his out call happened after Semien tagged Dyson the second time. The suddenness of the reaction indicates the tag forced the call, which is why I'm puzzled.)

Granted, the ending was still remarkable, but thanks to last year's White Sox, we've seen dumber, because Jordan Danks was picked off second to end a game in Houston. The only way to top it would've been a pickoff double play, and I can't help but think we might've been robbed of something truly glorious.