One month in, White Sox games longer than ever

The days of Mark Buehrle are over, and it's hard to see them ever coming back

Share All sharing options for: One month in, White Sox games longer than ever

The White Sox of the past decade have featured a combination of rapid-firing pitching staffs and aggressive hitters, creating a recipe for games that move along at a faster pace than most of the league.

But the 2014 White Sox really don't resemble their predecessors, at least through the first month, leading the American League in runs scored and runs allowed in April. Consequently, Sox games are now among the longest in baseball:

That data is from Baseball-Reference.com, which added game duration data to its league pages dating back to 1947. Around the same time, Baseball Prospectus did the same thing, adding an average time of game for all of baseball. Given the opportunity, I went through the last 67 years of data to see just how relatively slow White Sox games proceed in 2014.

You won't be surprised to find out that White Sox games take longer than ever before, and the rest of baseball is plodding along right with them.

But you might be surprised to see that the lengthening of an average White Sox game hasn't exactly been an even, gradual development over the decades (click on the image for full-size). 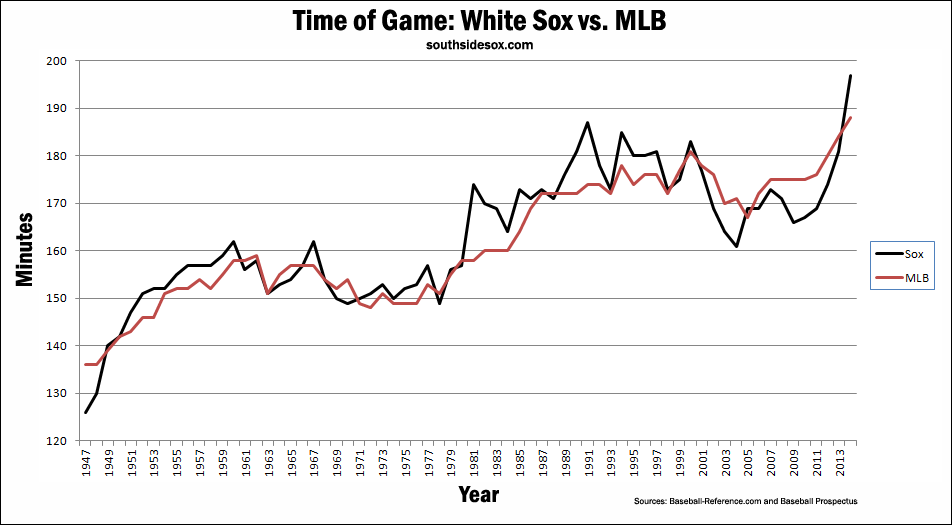 A few observations, in chronological order.

1947: The first year of data shows White Sox games clocking in at a cool 2:06, tied for the quickest games with the Detroit Tigers and Philadelphia Athletics. The difference between the fastest and slowest teams: 21 minutes, which is on the higher side. In following years, the divide would be closer to 12-15 minutes.

1970: For the first time, the White Sox are the undisputed speed champs! Also, the lost a franchise-record 106 games and draw fewer than 6,000 fans per game!

1981: After averaging 2:32 over the last 10 years, the White Sox suddenly need an additional 15-20 minutes. In other words, this is the season Tony La Russa comes into his own.

1991: The first year of U.S. Cellular Field coincides with the longest average game in franchise history (3:07), although that looks likely to fall this season.

2000: The White Sox set a franchise record for runs in a season with 978, which basically marks the last peak of the sillyball era (3:03), at least when it comes to game times.

2001: Mark Buehrle joins the rotation. Not by coincidence, the pace of the average White Sox game accelerates in each of the next four seasons.

2005: Sure, they win a slightly more important title in 2005, but at the expense of expediency. The average Sox game lasts 2:49, which is middle of the pack.

2013: The White Sox return to the three-hour mark (3:01). This time, however, their games are still faster than the league average.

2014: Nineteen of the Sox' first 29 games require three hours, with three taking over four. That puts them in an early hole, especially since the average April game in 2013 lasted 2:54. If the offenses rise with the temperatures, the question isn't whether the Sox will set a new record, but by how much.