Plus: Is Todd Steverson's iPod the secret to the White Sox' offensive turnaround?

A few articles (and related articles) that I wanted to highlight before the May schedule begins...

I'm glad Jose Abreu isn't as reticent as his first press conference suggested he might be, because the adjustment period he faces is a fascinating one. It helps when reporters like Jorge Ortiz can interview him in Spanish.

The cold weather has proven a bigger challenge than major league pitching. Abreu has a hard time sleeping when it's chilly, and heat from a furnace gives him headaches. Sometimes he'll immerse himself in hot water to get quick relief from a climate that's decidedly foreign to him.

"Never in my life have I had to adapt to the cold. It's tough to deal with,'' Abreu, 27, told USA TODAY Sports in Spanish. "But ever since leaving Cuba my mind-set has been to confront any adversity that comes up. … I can't wait for the summer to arrive.''

There has also been some sort of falling out with Yasiel Puig, and he's still working on his English and its random idiosyncrasies:

"How do you pronounce a word one way and then spell it a different way?'' he said. "I don't get that.''

"I told him, 'Hey, to play this game, you don't need to speak English,'" said Pujols, recently recounting their conversation. "'You play the game, you do what you have to do.'

But later in the article, Rick Hahn and a couple White Sox players say Abreu has distinguished himself in the clubhouse, and with relative ease. And in a Chuck Garfien article, Adam Eaton's trying to add to Abreu's lexicon:

"He says ‘Thank you.’ He says ‘Good job.’ We’re teaching him ‘Sometimes that happens.’ I said that to him. He’s picked it up pretty well."

When do you teach him to say ‘"Sometimes that happens?"

"You know, when you strike out with the bases loaded, hit into a double play. ‘Sometimes that happens.’"

So far, the assimilation process has been easier than expected, which makes Hahn wonder if Abreu helps others as much as others are helping him:

"I do think that when we initially acquired Jose there was a lot speculated about, 'Well, now they certainly need to keep Alexei and Viciedo in order to help Jose's acclimation to the big leagues,'" Hahn said. I'm not so sure that he's not the one having the positive effect on them."

It seems as though Todd Steverson spent the winter googling "music to hit by," and the players enjoy having a soundtrack, especially Tyler Flowers:

Only once in their three months together has Flowers’ 2013 performance, when he hit .195 with 10 homers in 84 games, come up. Flowers noted that’s the same amount of times that one of Lauper’s 1984 chart-topping hits has popped up on Steverson’s iPod.

"The other day we had a little Cyndi Lauper "Time After Time," " Flowers said. "(Steverson) said ‘Do you want me to change it?’ I said ‘No. Leave it. I love Cyndi Lauper.’ "

And I had to google whether Flowers was quoting David Puddy with that last part.

More Flowers: Colleen Kane has an article about Flowers' surprising April, in which he confirms Joe Maddon's observation that he lost some weight.

Nothing to do with the White Sox, but a few days later, this still makes me laugh. 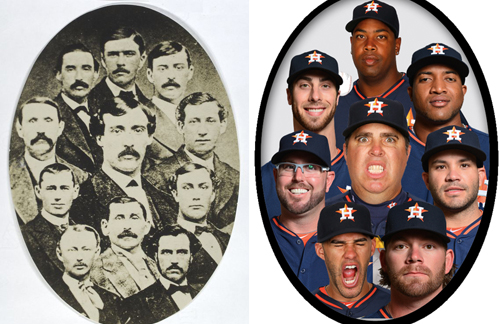 And that's before the part about turning mustaches into Pete Rose haircuts.