A perfect return for a near-perfect Chris Sale

Share All sharing options for: A perfect return for a near-perfect Chris Sale

Over his first two years as a starter, the Yankees had only seen the dominant version of Chris Sale. His game log reflects that:

And even he found a way to outdo himself on Thursday. Fresh off the disabled list, Sale struck out 10 Yankees over six shutout innings, maintaining a perfect game until a single with two outs in the sixth inning.

His performance made quite an impression no matter how you viewed it. Statistically, Sale posted a game score of 80 in just six innings. The only other pitcher to amass at least an 80 in no more than six innings? The legendary Matt Perisho, who threw a gem for the Rangers on the last day of the 1999 season.

According to Mark Teixeira, Sale looked the part on the mound:

"He was nasty, he didn’t give us anything to hit,’’ said Mark Teixeira, who was one of Sale’s 10 strikeout victims and his third of the first inning after Jacoby Ellsbury and Derek Jeter whiffed in front of him. "That was the best I have ever seen him.’’

He certainly let it fly out there. Brooks said he averaged 94.6 mph over 45 fastballs, with 22 changeups and 19 sliders. He established his entire arsenal at the onset -- when he struck out the side in the first inning, he used a different putaway pitch for Ellsbury (slider), Jeter (fastball) and Teixeira (changeup).

My favorite pitch of the evening was the slider that sent Jeter packing for the second time. Sale missed with his first pitch, but came back with a changeup (swinging strike) and 95-mph fastball (fouled off).  Then came the breaking ball:

For some reason, the WGN broadcast didn't have a replay of this pitch. The Yankees' broadcast gave it two more looks, though, and this one is especially awe-inspiring:

I mean, look where that pitch ended up on the Brooks chart: 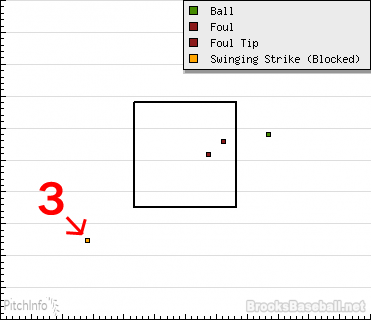 I thought Sox fans missed Sale's slider, but Jeter took it to a whole new level.

So yeah, Sale had everything working. Still, he kept the adrenaline in check when it came time to call it a night.

"Yeah, I mean, you obviously want to go back out there, especially since I'm usually not used to coming out after [86] pitches," Sale said. "I definitely wanted to get back out there, but I understand the circumstances and what we're working towards. Did I like it? No. But did I respect it? Absolutely. You've got to follow the plan and stay the course and see this thing through."

Robin Ventura has a firm grip on Sale's expectations, so much so that both knew he had no chance to extend the bid for a perfect game:

Because they both knew he was coming out after the sixth, Ventura said he was "relieved" when Sale gave up a hit, and Sale cracked, "I don't think I've ever been more excited to give up a hit in my life."

You can see it in Sale's reaction to Zoilo Almonte's single:

And he could run into a similar situation the next time out. He'll be under a pitch count again, and while Ventura says he won't make it public, Sale will be aware of it, and he'll have to try to compensate with efficiency. This all sounds good from here. Through one turn, the managing is as good as the pitching, and let's hope the second verse is the same as the first.