Right on Q: The Future of Adam Dunn

Overshadowed by Jose Abreu, Adam Dunn is quietly having a great year. Why not bring him back for next year?

Share All sharing options for: Right on Q: The Future of Adam Dunn

The White Sox will have some spending money in 2015. Before arbitration raises, the Sox payroll commitment will be a very manageable $46.4 million. Kudos to Rick Hahn for eliminating the big money contracts from the end of the Kenny Williams era.

With a better idea of what to expect out of his new players, Hahn can dole out the free agent contracts.

One of those contracts should go to Adam Dunn.

Now, I know what you're thinking.  Actually, I'll let Moe Szyslak say it for you.

Adam Dunn's White Sox tenure has been, shall we say, suboptimal on the field and off.  The old saying is that generals fight the last war, and Adam Dunn's four year, $56 million dollar contract was in response to the DH Merry-Go-Round in 2010.  Goodbye Mark Kotsay, hello to a left handed slugger who did nothing but take walks and hit home runs.

At SoxFest, fans asked if he was going to hit 50 home runs. The 2010 team won 88 games without a DH. The same team plus Dunn's 40 home runs should make the postseason. It was Manifest Destiny. For example, I was planning my wedding at the time (the date was in October 2011), and I told my fiancée that we might have to ask for a TV at the reception venue so the guests could watch the White Sox playoff game that would no doubt be played that night.

Dunn never came close to fulfilling those inflated expectations. His 2011 was so bad, it created an impression that some Sox fans simply could not shake.

"He's a bum who does nothing but strike out!" 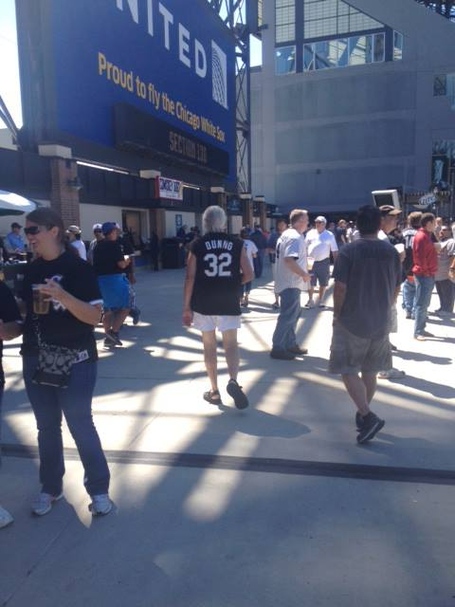 Because of that disastrous 2011, it was a foregone conclusion that Dunn was either gone the moment his contract was up - or he was going to be traded as part of a salary dump.

Allow me to add a third true outcome:  the White Sox probably won't catch Detroit.  But they are 1½ games out of a Wild Card slot.  If July 31 rolls around, and the Sox are still that close to a postseason berth, there's no way Hahn trades Dunn.

In the American League, Dunn is currently:

If you do trade Dunn, what do you get in return?  He's a free agent at the end of the year, and the White Sox will get nothing more than a relief pitcher. The return haul from an Adam Dunn trade would get an invitation to spring training, a possible call-up in September, and a nice life in Charlotte.  It wouldn't be worth justifying trading a middle-of-the-order hitter in the middle of a pennant race.

That brings us to next year.

Dunn says his improvement has to do with the lack of pressure.  He doesn't have to be The Guy anymore.  As he told ESPN Chicago's Doug Padilla:

"You know that there are eight guys in the lineup capable of doing the job. When you don't have that, when you have guys that are struggling, you can be struggling yourself, but you put that much more pressure on yourself knowing that's your job, that's your position, that's what you're supposed to do is drive in runs. Obviously, it does help a lot when everybody is doing what they are doing."

The numbers back up Dunn's assessment of his approach.

Next year, the White Sox offense will feature Jose Abreu and a (hopefully) healed Avisail Garcia.  Dunn, if he were to return to the White Sox, would be sandwiched in between two power hitters.  Dunn would make that lineup better.

Based on the previous three years, Dunn won't get the massive contract he received from the White Sox in 2010.  For the rest of his career, he will get the Moneyball deal:  short, mid-range contracts from American League teams.

Why not the White Sox?