There's a genuine adjustment behind his three-start run, but a favorable schedule plays into it, too

The first rainout of the season allows the White Sox to take the weak link out of the equation against the AL Central's strongest team. Andre Rienzo was supposed to face the Tigers tonight, but instead, Robin Ventura kicked him back to Sunday against Kansas City. Now John Danks will take the mound tonight with an extra day of rest, and Chris Sale remains on his regular routine for a Thursday showdown with Max Scherzer.

It wasn't long ago that Danks lagged behind the rest of the rotation, but he comes into today's game on a roll.

The change was attributed to a shfit on the rubber, as Danks moved to the third-base side of the rubber after a rough outing against Houston on May 18.

Here's Danks from the windup -- the left is his start against the Astros, opposed to his next outing against the Yankees: 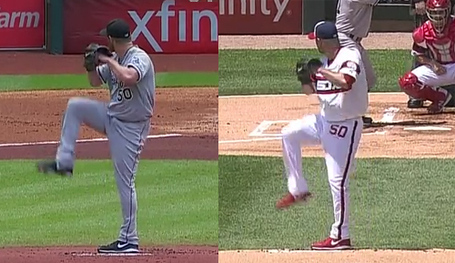 And here he is from the stretch. 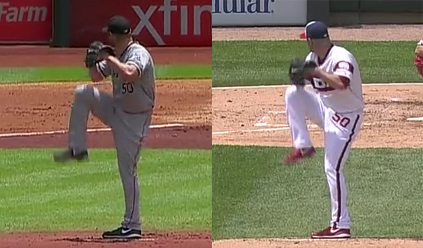 That's looks like a difference of nine inches or so. When looking at his pitch maps, the noticeable different from the Astros start to the Yankees start? Danks had a much better idea of the inside corner (to righties): 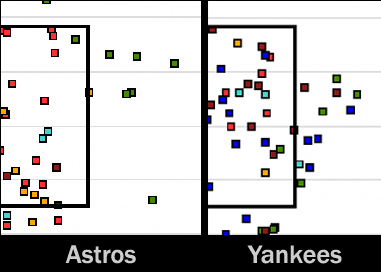 The dark blue squares on the right are batted-ball outs. He piled up six of them around the glove-side corner, while that a same area seemed to have a forcefield around it in Houston. It was less noticeable in subsequent starts against the Padres and Dodgers, but both games are still an improvement over that debacle against the Astros.

He's widened his own plate, which is exciting. But there's also a boring answer -- a favorable stretch of opponents. The Yankees have a bottom-third offense in the AL, the Padres have the worst lineup in the game, and the banged-up Dodgers started five guys with OPSes below .700 (including the pitcher).

The Tigers should pose a better test. They have a couple of all-world hitters, complemented by other players who have pounded Danks in the past. But hey -- they're averaging fewer than four runs a game over their last 20, so maybe Danks is catching them at a good time, too.

This is all kind of a longwinded way of saying "regression," except more detail is welcome since it's not entirely clear what Danks is regressing to in 2014. He's a different pitcher in his second season back from surgery, most notably with his walk rate. He's walking guys twice as frequently, but this is the one case where it's almost a good idea. While that sounds like a doctor recommending a high-fat diet, that analogy hits a wall when considering that Danks has cut his meatball rate just as drastically:

We could pretty much rule out that he wasn't the 5.64 ERA pitcher after the Astros start. But is he a 4.32 ERA pitcher or better the rest of the way? His FIP (4.60) doesn't think so, and I'm inclined to agree. My guess is that he'll revisit the other side of 4.50 at various points over the rest of the season -- not so much because his next 75 innings will be demonstrably worse than his first 75 innings, but because his thin margin for error makes him more susceptible to those real ERA-kablooey starts.

That's not to discount any effects of the change, because he didn't allow a terrible start to carry over into another one, and maybe feeling like a different pitcher contributed to the rebound. There's also no knocking the the impact of this recent hot streak. It may turn out that Danks fed on the weak, but that's something every pitcher needs to do for himself and his team. That's the easiest way for Danks to get to 180-190 innings, which is a total that's virtually out of reach for a Rienzo-grade guy.

If Hawk Harrelson were receptive to sabermetrics, he might say something like, "Show me a starter who has teams he should beat, and I'll show you a starter who is a cut above replacement level." That's not exactly high praise for a $14.25 million man, but the capsule surgery basically demolished the relevance of his salary. These days, if he can provide quantity, that's quality enough.