Right on Q: A salute to Dad

Share All sharing options for: Right on Q: A salute to Dad

Why are we White Sox fans? We are Sox fans because of parentage and geography. Very few sports fans base their loyalty on a dart board and a map.

"That settles it!  I'm now a fan of the Bridgeport Bluefish!"

Since this is Father's Day weekend, let's take a moment to say thanks to the people most responsible for getting us into this silly cult of Sox fandom in the first place.

I would like to think that today marks the start of many years of Sox fandom. Decades from now, I have this image in my mind of the two of us walking around the ballpark. Maybe we'll look at a few more championship banners up on the light towers. We'll admire the statue of Paul Konerko and I'll talk about the grand slam he hit in the 2005 World Series.

"When Jermaine Dye was awarded first base after he successfully faked getting hit by a pitch ... I knew something magical was about to happen..."

But that's the distant future. Soon, Sox games on the TV will play second fiddle to "Doc McStuffins". A few years after that, the budget devoted to Sox tickets will be re-allocated to tickets to see a teenage pop sensation who is currently finishing second grade.

My daughter was born last Sept. 24. It was the night this happened. Thirty-six hours later, we had to leave the hospital. I remember thinking that was not nearly enough time to get comfortable with the awesome responsibility of caring for another human being.

"You're out of your mind! We just got here!"

Contrast that to when we changed the music software at the radio station where I work. The on-call engineers from the software company were in Chicago for an entire week to make sure we knew what we were doing. I got more hands-on training on how to play "Don't Fear the Reaper."

Thankfully, I have my dad to serve as a guide. He took me to my first Sox game in June of 1985. I wrote about the experience several months ago. Sadly, the video has been removed from YouTube. But the memories remain.

My parents would argue that my "first" Sox game was May of 1980, one month before I was born. The White Sox got lit up by the Brewers, and the fans vented their frustrations by throwing their free copies of Omni magazine around Comiskey Park.

In addition to a love of White Sox baseball, my dad has spent the last 34 years as a living example of "how it's done." Resurrection Hospital may have provided very little hands-on child training, but I learned the fundamentals from my own dad. He and my mom have been married for 35 years. They have lived in the same house in Beverly for the last 30. He's a church usher. He was a referee in my sister's soccer league. Family and community were the lessons I learned from him growing up. I hope to pass those same lessons along to my daughter (and her future siblings) over the years.

I also hope we will have the connective tissue of the White Sox. My first game was in 1985, but we were always good for two or three games a year after that. Attending a White Sox game was always a BIG EVENT. In order to beat traffic on the Dan Ryan, we drove through parts of the city I usually didn't see.

Western to 47th, 47th to Damen, and then the now-demolished Damen Avenue overpass to Pershing. Every now and then, we went to Comiskey Park on a school night. 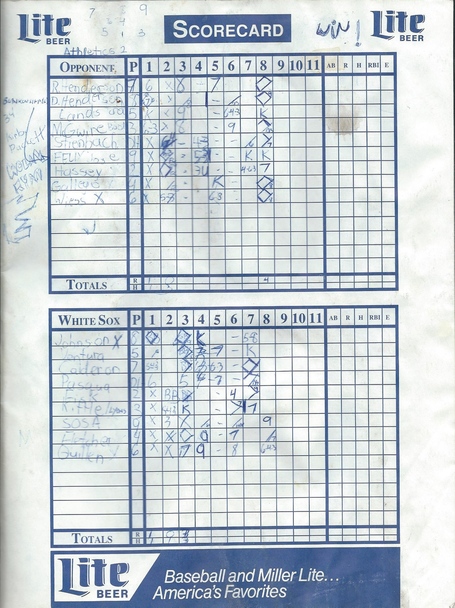 Back to that hypothetical future walk through U.S. Cellular Field (or whatever they're calling the facility in the distant future). In addition to pointing out the monuments to past White Sox glory, I'll point out all of the memorable moments my dad and I shared at White Sox games.

Today, my daughter will be introduced to an institution that unites the generations. My grandpa griped about Al Lopez and Tony LaRussa. My dad and I second guessed Ozzie Guillen and Robin Ventura. Twenty years from now, my dad, my daughter and I will probably complain about the managerial decisions of Gordon Beckham.

Happy Fathers Day. To my dad -- and to all dads -- thanks for getting us into this crazy business. I'll do my best to pass it on.