Robin Ventura made two baffling decisions tonight. Miraculously, the second one worked to cover the stink of the first.

With runners on the corners and one out, Ventura sent Leury Garcia -- he of the 1-for-25 slump and two game-killing at-bats the night before -- up to pinch-hit for Moises Sierra. Even with Mike Scioscia calling for the five-man infield, Garcia still stuck his bat out on a pitch off the plate and shot a low liner through the left side for a walk-off single, which gave the White Sox their first victory over the Angels in their sixth and final attempt of the season. 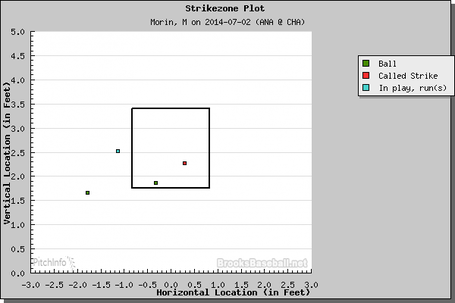 Heroics from Garcia and Welke were necessary because of the first inexplicable decision Ventura made -- to send out John Danks on 107 pitches for the eighth inning against the heart of the Angels' order.

This was a horrible idea at the time, and not just scouting off the pitch count. Danks began to float changeups the inning before, getting away with one to C.J. Cron for a strikeout, but serving up a solo shot to David Freese that cut the White Sox' lead to 2-1. Yet for some reason, Ventura sent out a flagging Danks to face Mike Trout and Co. for a fourth time, just like he did with Chris Sale and Scott Carroll in previous games this season, and to disastrous results.

Danks got lucky when Trout gave up on a high full-count changeup, and it dropped back in the up-and-away portion of the zone for strike three. He got even luckier when he hung a changeup and Albert Pujols hit it to left center, which was a dead zone all night. It landed in Adam Eaton's glove on the warning track.

Then came Josh Hamilton. He usually struggles against lefties, but he doesn't struggle against Danks (7-for-16, a double and a homer) -- and Danks doesn't dominate lefties -- because his best pitch is a changeup, and not a sweeping breaking ball. Sure enough, Danks tried sneaking a changeup past Hamilton on a 2-0 count. He hung that one, too, and Hamilton hit it out to right to tie the game.

After 120 pitches ... THAT'S when Ventura decided to go to the bullpen. Zach Putnam ended the eighth with a strikeout, then faced the minimum in the ninth thanks to a SHOTHO. He picked up the win, but Danks deserved it, as he tied a career high with 10 strikeouts over his 7⅔ innings (although it should've been nine over seven).

With a drizzle of varying intensity falling throughout the game, Danks and Tyler Skaggs locked into a pretty tight pitchers' duel. Skaggs pounded the strike zone -- he threw 70 of his 87 pitches for strikes -- and Gordon Beckham seemed to be the only Sox hitter with a good read on his stuff. Hamilton robbed Beckham of a homer to left in the first inning, but Beckham got his revenge in the fourth by following Adam Eaton's swinging bunt single with a double to left center.

The first two hits of the game put runners on second and third, and Skaggs loaded the bases by pitching around Jose Abreu. Dayan Viciedo came up and bailed Skaggs out, fouling off a hammerable fastball and two hanging curves before hitting a not-quite-sizzling liner to second for the first out. Alexei Ramirez, who has had RISP problems of his own lately, picked up Viciedo by shooting a single back through the middle to give the Sox a 2-0 lead.

Skaggs settled down after that, but Danks sidestepped the two jams he faced through seven. A bunt popout helped him settle down after the first two batters reached on Danks' only walk and a single in the third, and he got Mike Trout to pop out to foul territory with men on first and second in the fifth.

Scioscia took the opposite approach of Ventura's, lifting Skaggs after 88 pitches with two outs and nobody on in the eighth, because Beckham had squared him up in all three at-bats. Morin defeated Scioscia's move by walking Beckham, and the no-doubles defense allowed Abreu to drop a broken-bat single to medium-range center to extend his hitting streak to 17 games, but Viciedo flied out to center to end that threat.

But they didn't let Morin off the ropes in the ninth. Alejandro De Aza shot a single to left with one out, then moved to third when Conor Gillaspie's broken-bat grounder somehow found the hole on the right side, setting up Garcia's game-winner.