Does Rick Hahn have what it takes?

Share All sharing options for: Does Rick Hahn have what it takes?

I'm disappointed that I keep having to do this. One should expect a general manager to get better the more experience he has in the position. There are things we can forgive - such as the utter failure of Hahn's groundballin' bullpen experiment or physical mistakes like a suit wrinkling too soon - but style errors are mental mistakes. They can't happen. They just can't.

As Hawk constantly reminds us, GMing today is a game of closets. It used to be "don't tell me what you wore, tell me how many times you wore it." However, cameras are everywhere now. GMs have beat writers and sports channels getting snapshots on a near-daily basis. The paparazzi follow them whenever they step out of the front office. And every Tom, Dick and Ligue has a camera phone. That ubiquity is how goofy images like this get published: 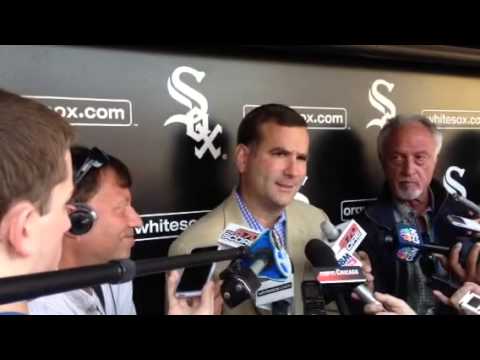 Back in the day, a GM could throw the same suit on for days, even wearing complete weeks. Long-time Yankees GM Ed Barrow holds the modern era record for complete weeks with 437. Even the best GMs these days are lucky if they manage a couple a year. Heck, as we all know from Steve Stone's harping, Tigers GM Dave Dombrowski didn't have a complete week in his career until last month - against the White Sox, of course. The obsession with thread counts is killing the game.

Today's GMing is a game of depth and match-ups. You might see a GM use multiple ensembles a day. Guys used to come out of their closets junksuiting, bringing maybe a Super 100. Now, it seems like everybody has a dozen Super 220s coming out of their closet. They can only go a few hours before wrinkling too much and usually last only a couple years in the big leagues but they're tough to beat when they're on.

So let's see what Rick Hahn's got in his closet.

This is from the Winter Meetings. Three GMs hammering out the three-way deal that brought Adam Eaton to Chicago.

The first thing your eyes notice is the disaster Kevin Towers is on the right. An awful cream-colored button-front with a too-big collar that he probably had "folded" in his luggage for a few days. Straight leg jeans. Some kind of black cowboy boot thing appears to be going on, too. And I can't even comment on that watch. There's a reason this guy lost his job to the father of modern closets, Tony LaRussa.

Jerry DiPoto on the left doesn't look terrible but that checkered button-front doesn't exactly scream "I"m about to make a good trade." And this is his suite and you can tell a lot about a man by how he treats his clothes after he's worn them - and those crumpled clothes on the table and chair in the back aren't telling a good story.

Hahn, on the other hand, looks like he's got this thing under control and is about to trade rape somebody. Grey suit pants, nice blue collared shirt. As has become his trademark, he conveniently placed his feet in the shadows so we can't see the color of his socks.

Now let's take a look at the press conference that happened shortly after the deal got hammered out. 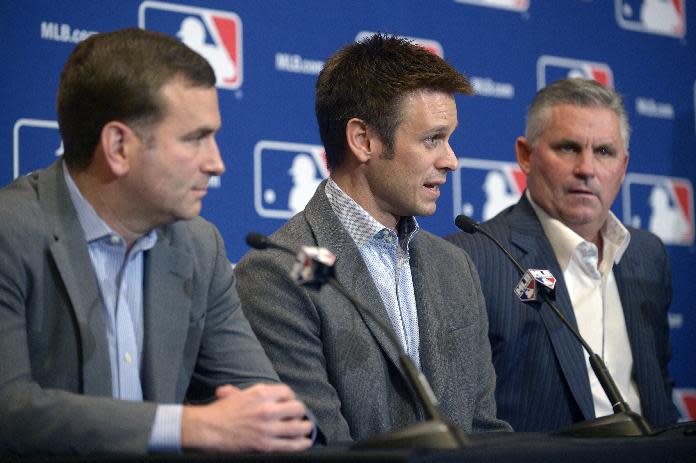 DiPoto went into his closet and pulled out a new shirt. Again, this isn't terrible but that looks like a heavy wool blazer. Considering he's a southern Cali guy, depending upon the weather circumstances, that can certainly be acceptable. But the meetings are in Florida. DiPoto should have a pretty deep closet in all-weather suits and blazers. He should also have a pretty deep baseball knowledge that Hector Santiago's walk rate isn't something to bet on long-term. Apparently he lacks both.

What's there to say about Towers. For God's sake, at least bring in a new shirt. And a navy pinstripe jacket with jeans? I don't even.

Hahn comes across looking very good. Brings in the matching suit jacket. Lets DiPoto mouth off while Towers looks like he just saw Nick Punto walk by in his grindy birthday suit. This is Hahn in his element. Not a formal press conference scheduled in advance, so he can get away with no tie and can stick with what he's wearing when the deal gets done instead of agonizing in front of his closet for hours and choking. Also, lower pressure since you're pretty much guaranteed at least one win if you're at the table with Towers. And does a nice job of matching up with DiPoto.

This isn't some Kenny Williams-level press conferencing but it's probably a decent 50 grade. You think maybe Hahn has gone about rebuilding his closet the right way by acquiring some solid if unspectacular suits to use in medium leverage situations.

But it seems like that press conference was nothing more than a Gordon Beckhamesque false spring. Hahn shows a flash of the dresser we all thought he could be when Jerry Reinsdorf drafted him #8 overall in the Front Office Draft and we think he's finally - finally! - turned the corner. But then reality sets in yet again and we see it was just a BaBWM-fueled illusion.

Let's take a look at his most recent press conference, introducing the White Sox July 2 signings. If he thought this was "I'm just going to the DR for a couple days, the paparazzi aren't going to be there" - wrong!

In isolation, Hahn looks like he's done well. This is July in the Caribbean so you're not going to come in with a full suit and tie. He's presenting 16-year-old kids who aren't coming from rich backgrounds, so he's matching up with very raw clothing talent and he doesn't want to completely outshine them. This looks like it should again be a solid if unspectacular 50 grade.

To see what's so wrong with this, though, we have to go back to last year's signing announcement of Micker Adolfo. Remember, people, context is essential in evaluating a GM.

First, I've just gotta say what the fuck is Marco Paddy doing. Two years in a row he shows up in the same shirt. This is one of those situations where somebody in Chicago needs to send him a nice White Sox polo and tell him to just wear that as his uniform going forward. But I digress.

All Hahn did in 2014 was swap suit pants and coats. In 2013, blue coat, khaki pants, white shirt with open collar. In 2014, khaki coat, blue pants, white shirt with open collar. This is the lack of imagination I'm talking about and, frankly, I think it shows a flagrant lack of preparation, too. Hahn knows that I'm going to be critiquing his choice of clothing. And, even with that knowledge, he shows up in that? You can't build a closet like he built this year's bullpen. I'm sure when Rick was packing his bags he was all "I'm the Billy Beane of GM fashion! Mixing up suits is a market inefficiency. Look at me arbitraging it like a real baller with interchangeable clothing!"

He's clouding a nice debut by Ricky Mota here. This kid has got a real solid base on which to project. Yeah, this is Latin America, and you might expect to see flashy colors. But look at what Adolfo and the other kids were wearing when they signed. Mota came in strong with the well-fitted, checkered pink button-down. But, instead of talking about him - the point of this press conference, after all - here we are again talking about Hahn.

Hahn is a front office veteran, has been in the GM job for almost two years now and he keeps making simple style errors. Yeah, it's good to be able to interchange some clothing. But it can't paper over serious deficiencies in the closet. Your closet isn't like your bullpen where you can go out and acquire some cheap talent with some upside and hope of few of them have bounceback seasons. Suits don't have upside. They are what they are. A Super 130 isn't going to magically turn into a Super 220. And if they're done, they're done. There's no bounceback. Just leave it in the bag on your porch and take the tax write-off from AMVETS.

As previously detailed, Hahn doesn't yet have high-leverage suits and that's where you need to start building a closet. If you don't have those, your set-up clothes are thrust into high leverage situations. And then you have to use the Maikel Cletos and Scott Carrolls that are far down on your depth chart, hope you can pair them with a Jake Petricka and amalgamate a solid piece. Instead, the low quality clothes get exposed in everyday use for what they are - replacement level junksuits. And now you're scrambling at the Goodwill, digging up the fraying corpse of a Frank Francisco. Or trying to re-purpose a flashy Leury Garcia piece from your clubbing days that you had not in your closet but in the drawer under your bench.

Everyone knew going in that Rick didn't have a great clothing tool. Apparently, Reinsdorf hired him based on his baseball acumen or something. But we all heard he was a hard worker, coachable, had great make-up and looked good in jeans. His salary increase should have gone to getting some expert tailoring help. Instead, it seems Hahn is trying to bring his bullpen strategy to his closet and it simply isn't working. Maybe it's time for Jerry to think about making a change.

And, I have to ask, is that just what Hahn wears when he has to take pictures with kids?