Pinch-hitting with Leury Garcia worked out better than staying with John Danks, which means the White Sox manager got what he deserved

I wrote the recap of the White Sox's walk-off winner over the Angels on Wednesday night before I heard Robin Ventura's comments on two unusual and ostensibly unwise choices:

We have the right to first-guess along with the manager and disagree, but we should also be open to counterarguments. In this case, the first move failed, but the second move worked. Garcia's single through the left side erased the damage done in the eighth inning, so maybe there was a method to some of the madness?

Ventura spoke about both after the game, and his choice for Garcia did make some sense ...

"Once you get first and third, you put in a situation where maybe they’re thinking of a bunt or something can get away, so going with contact there," Ventura said. "He had a good at-bat. He got something he could hit in there. They went with a five-man infield, so even hitting something at that point to get it through the infield isn’t all that easy. I think he was surprised in that spot to be pinch-hitting, but he’s going to make some contact."

... although not in his description of Garcia.

Even if you write off the 1-for-25 slump as weird clustering, my inclination against Garcia was based on the fact that he's the opposite of a contact guy. He's struck out in 29 percent of his plate appearances, which is the fourth-worst rate on the active roster  (the White Sox strike out in 22.3 percent of their plate appearances overall). He strikes out so much because he swings at more pitches outside the zone than any hitter besides Jose Abreu, and he doesn't have Abreu's bat-to-ball skills. He looks like should be a good contact guy, but his swing somehow lacks a plane, and the end result is that he often fails to give the White Sox good plate appearances. That's why he's hitting .182 with a .222 on-base percentage.

That said, the presence of Garcia and the heightened chance of the bunt did get the wheels turning in Mike Scioscia's head. He reacted by calling for five infielders, and so the bringing in Garcia did force the Angels out of their comfort zone. Even if Garcia ended up striking out, Scioscia's reaction showed that Ventura's hunch had merit. He would have lacked the personnel to pull off the strategy, but at least he had the strategy.

Ventura had neither in the eighth inning, when he let John Danks face Mike Trout, Albert Pujols and Josh Hamilton for a fourth time on 107+ pitches. Here's the start of his explanation:

No. 1: It's dangerous to compare what a pitcher looks like to a hitter "early on" versus what he is likely to look like the fourth time that night after 100 pitches. There's been plenty written about how the number of plate appearances in a game is more crucial than pitch counts when determining when to yank a pitcher. It even has a name -- TTOP, or the TImes Through the Order Penalty.

You take what you've seen tonight and put it out there. He felt strong, talking to him in between the seventh and eighth, he felt great. [...] Veteran guy, he's pretty up front when he's feeling good and when he's not. Tonight, that pitch got him.

The thing is, it wasn't just that one pitch. Ten of the 16 changeups he threw from the sixth inning on were elevated to varying degrees: 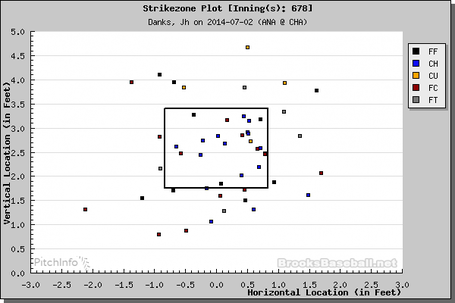 But it became a more pressing issue in the seventh, as Danks threw a few unimpressively located changeups to C.J. Cron. Then again, Cron couldn't read the pitch out of his hand at all and missed on the speed, so maybe those had action.

But David Freese could certainly tell it apart from his fastball, and when Danks hung one there, Freese knocked it out of the park to right. He rebounded nicely to get the last out of the seventh, and at 107 pitches and the lineup turning over, that would've been a great time to call it quits.

But nope, he returned to the mound to throw high changeups to three hitters whose contracts are worth more than $500 million combined. He got away with one to Trout, because Trout thought it was too high or too away:

But on most other nights, Pujols would've tied it up before Hamilton got a chance to:

Ventura said, "You go by what you've seen tonight." The fourth time through the order and 110+ pitches into the game, I'd rather go by what being seen present-tense -- and there, I saw a pitcher who just thought he gave up the game-tying blast: 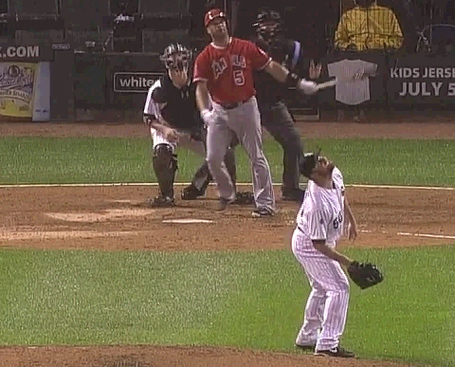 One batter later, that became a reality when Hamilton teed off on the same changeup Pujols just missed.

Ventura might've had a case if Danks made the mistake to Hamilton out of nowhere. However, he made similar mistakes to three other hitters since the start of the seventh, or four if you count Cron. If you survive a round of Russian roulette, your instinct shouldn't be to say, "Double or nothing!"

It's worth making a big deal about this, because it's not like the White Sox starters had earned the privilege. In fact, they're by faaaaaaaaar the worst in the league at facing hitters a fourth time. Entering Wednesday's game:

The bullpen may not be trustworthy, but the aggregate starter facing a lineup a fourth time may as well be Mitchell Boggs. Hell, it wasn't a wise choice to let Sale face Trout for a fourth time in a tense situation in Anaheim, but at least he's an ace, and at least it makes for a good rule of thumb -- a bad idea for Chris Sale is a horrible idea for any other White Sox starter.