Jose Quintana didn't have a great outing on April 19th.  In his first loss of the season, he threw 98 pitches in five innings.  Very uncharacteristically, he walked two while striking out one.  He gave up nine hits, including a homer, and five runs.  Since joining the White Sox, the cutter has been Jose Quintana's number two pitch.  He threw his cutter 26 times in that loss to Texas.  Since that game, Quintana has almost completely given up on his cutter. Does he even need it though?

Quintana has always been a fastball pitcher.  More so than most other pitchers.  His low was during his rookie season when he threw his fastball about 48% of the time.  This season, he's bumped that up to a but over 53%.  Along with the added usage, his velocity has jumped up about a mile and a half from a 90.7 mph average in 2012 to 92.3 mph this season. 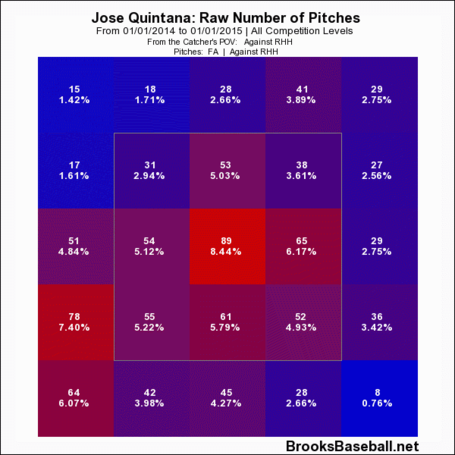 To right handed hitters, the hottest zone for him is right down the middle with his fastball.  He pitches them inside regularly as well, but he moves in and out around the zone.  With a FIP of 2.87, that 92 mph fastball seems to be more than enough to deal with most batters.

So how does Quintana's fastball rank with other pitchers?  Let's take a look at wFB over the past two seasons.  That stat looks at the runs above average that the pitcher's fastball is worth.

Ah, but I said Quintana throws his fastball a lot. More than these other guys. Let's try wFB/C, or how much the fastball is worth above average for every 100 fastballs thrown.  How does Quintana compare over the past two seasons?

Besides showing that Clayton Kershaw is a really good pitcher, if you're talking about good fastballs, Jose Quintana is a guy that's among the best in the majors.

The next change is the role of his other secondary pitches.  With the cutter almost gone, Quintana's sinker, change and curve have picked up the slack.  His curve has become his number two pitch this season, and it's gotten very good.  He throws it to lefties and righties and gets a lot of strikes with it, getting a whiff from it 11.53% of the time with a batting average and slugging of .167 and .232 against it.

Quintana's sinker and changeup are more situational.  Sinkers are usually just against lefties to break in at their hands.  Changeups are for righties to add some deception with the fastballs and Quintana is throwing it almost as often as his curveball.  The changeup hasn't been especially effective with righties batting .306 against it, but at least give batters something to think about.  Also, right handed batter were hitting .385 against the cutter.

For now, Quintana seems to be doing fine with the three pitch mix against batters.  He still throws the cutter now and then.  He threw one against the Giants on Thursday.  That was the first he's thrown this month.  I wouldn't expect that the cutter will be gone forever though.  It's just on ice for now -- waiting for the day it's needed again.