Back before the White Sox bullpen filled up our bad-memory DVRs and forced us to delete previously saved programming, you might remember Scott Carroll getting squeezed against the Twins in the first couple innings of his start on Saturday, and Hawk Harrelson's related complaints.

Harrelson did have reason to gripe, because Gary Cederstrom's zone was indeed awful. 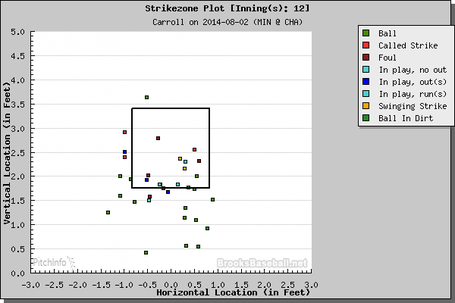 But as most us know, there is a factor in between Carroll's release point and Cederstrom's call.

Bad inning by Cederstrom, but that's one reason why Flowers plays as much as possible despite his offensive problems. Nieto's a poor framer.

I forgot to revisit that idea thanks to the subsequent trauma, but Mike Petriello at FanGraphs filled that gap with a great post highlighting everything that worked against Carroll. He does place blame on Cederstrom, who set the single-game high for percentage of strikes missed this year on Saturday.

... and his occasional drop.

Read the whole post, because it's worth your time, and it provides a refresher for why Tyler Flowers plays as much as possible despite his midseason offensive cratering, and why Nieto needs development time in the minors next season.

If you're curious, here are the pitch-framing stats for both catchers to date from Baseball Prospectus: