After a game in Boston on July 8, Tyler Flowers was hitting .219/.278/.302 and playing his way to a reduced role, if not out of the White Sox' future plans entirely.

Then Flowers started fighting that fate. He made a much-documented switch from contact lenses to glasses on July 9 and has since turned things around.  He's hit .390/.438/.695 since that date, including a particularly hot 12-game stretch of slashing .452/.511/.738.

Despite Flowers' overall pedestrian line, this is not the first time that he's caught fire. At the beginning of the season, he was deemed a BABIP god as he blooped and dribbled his way to a .354 average in April.  There's some differences between this recent surge and the previous one, however, and some of those differences give cause for optimism going forward, despite the obvious concern that it's a very small sample of games.

No. 1: Flowers has made a change

This one is a bit obvious, but thanks to the switch to glasses, we can actually point to something that Flowers is doing differently. Had Flowers changed nothing, it'd be much easier to write off the hot streak as just a hot streak.  If he's picking up pitches even a little bit better with his new eyewear, there could be reason to expect better things from him going forward.  As an outsider, it's hard to conclude that his vision has definitively improved in some way, and heck, even Flowers doesn't think there's a direct correlation. However, there's a chance that some of the gains aren't fluky, and should that be the case, there's a narrative here that could fit.

No. 2: He's hitting the ball with authority

Flowers is credited with having "light tower power", but before July, he didn't show it.  Prior to July 9, his isolated power was just .083, with a measly five home runs and five doubles on the season.  That was particularly discouraging for a guy with such raw ability in that department.  Since then, however, he's clubbed seven doubles, a triple, and and three home runs, good for an isolated power of .305.  In the past, Flowers was looked at as a player who could be expected to hit for power while not getting base at a great clip.  It's good to see him start to live up to the former again.

No. 3: He's striking out less often

Flowers' post-glasses strikeout rate (23.4 percent) wouldn't be much to write home about for most players.  However, Flowers has fanned in over a third of his career plate appearances, so that ranks as a significant improvement.  By contrast, his strikeout rate during his strong April was 35.2 percent.  If Flowers can continue to make more contact, he'll have a better chance of maintaining the gains to his batting average.

No. 4: His batted ball chart looks much, much better 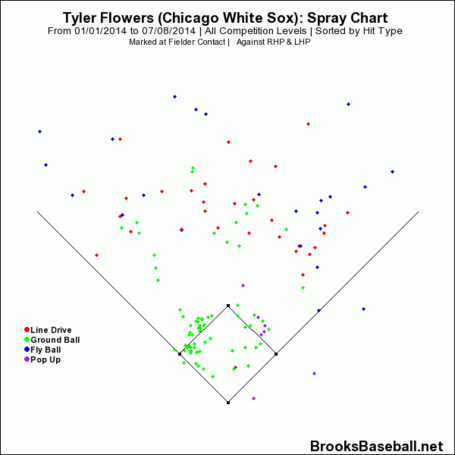 And here's the batted ball chart since July 9th: 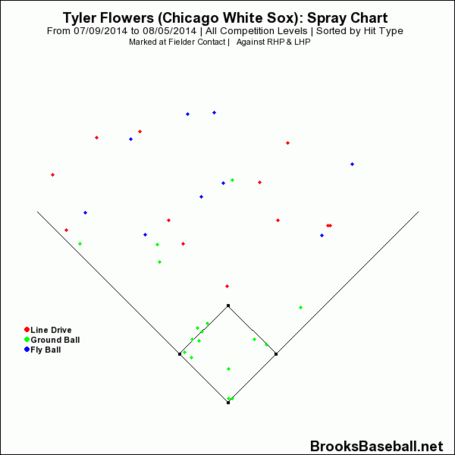 There's a few observations to take in here:

No. 1: Flowers hasn't hit a pop-up since donning the glasses.

No. 2: He's hitting the ball in the air more often.  Flowers doesn't run all that poorly, but a player with great power and without great speed should try to keep the ball off the ground.

No. 3: He's been pulling the ball a lot more in recent weeks.  In addition to helping to improve power numbers, this has probably contributed to Flowers' stellar BABIP during the streak.  You can see a cluster of fly balls and line drives in the top chart that land about where the right fielder would usually play.  It's a reasonably safe bet that many of those were not hit all that hard and were easily caught.  By pulling the ball, Flowers has been able to use more of his power to keep the ball out of reach of opposing outfielders.

Whatever the underlying cause for Flowers' scorching hot bat, he's raised his season line to .252/.309/.379.  Per Baseball Reference, he's up to 1.7 WAR on the season, while FanGraphs has him at 1.3 WAR.  Since neither measure takes into account Flowers' good pitch framing ability that Jim alluded to yesterday, there's a good case to be made that Flowers has been worth about two wins with a little under two months left in the season.  If he can keep up that pace or even just continue to make a net positive contribution, his 2014 season will be one of a player well worth starting, especially when he comes at a discount to the free agent market.

The elephant in the room, however, is Flowers' .380 BABIP this season.  That will certainly come back to Earth, but if he can continue to limit his strikeouts and hit for power, he has a good shot at fighting regression reasonably well. Either way, Flowers' recent play has made his last two months far more interesting to watch, because they are likely important in determining his future role with the team.  The White Sox have a long offseason shopping list.  They'd really appreciate it if Flowers could cross off "starting catcher" for them.