The smaller guy threw harder, but the bigger guy emerged with the lower ERA

Adam Dunn pulled a George Costanza and left U.S. Cellular Field on a high note. He pitched an entertaining, not-embarrassing inning in the blowout loss to the Rangers on Tuesday night, then departed before the media could talk to him.

Reporters were left to hear from Adam Eaton:

"I haven't laughed on a baseball field like that in a long time, ever since I was probably kicking dandelions, in my early teens. He had good sink, that's all I can say. He was 80 mph but he had really good sink."

And Texas' J.P. Arencibia, who flared out in foul territory:

"Honestly, for me, it's the worst at-bat in baseball. It's a lose-lose situation. Your adrenaline is at zero and you're just trying to be as locked in as possible, and you look up there and there's Adam Dunn, you know? A guy that I've watched my whole life growing up, hitting homers and looking up to ... and now I'm facing him."

Back in September of 2012, after Dewayne Wise pitched an inning for the first non-pitcher appearance by a White Sox in 17 years, I wrote a post detailing the brief history of such endeavors.

Since then, Robin Ventura has tapped three other position players. Last year, Casper Wells set the standard by not only throwing a scoreless inning against the Cleveland Indians on June 28, but recording a strikeout on a secondary pitch. The changeup he threw Asdrubal Cabrera was the real deal:

(This was the first of two outings for Wells in 2013, but he pitched for the Phillies the second time, so we can ignore that abject disaster.)

With a worse bullpen this season, Ventura has had to send in the clowns twice -- and he couldn't have used two more different baseball-playing humans for the task.

On April 16, Ventura burned through the bullpen so quickly that he effectively hung the loss on Leury Garcia in the 14th inning. Then there was Dunn, who was deployed solely for comedic effect down 15 runs to Texas. We might be growing accustomed to the non-pitcher pitcher at this point, but Dunn managed to distinguish himself by hitting for himself in the ninth, leading to a chyron that makes for a great "What's Wrong With This Picture?" puzzler: 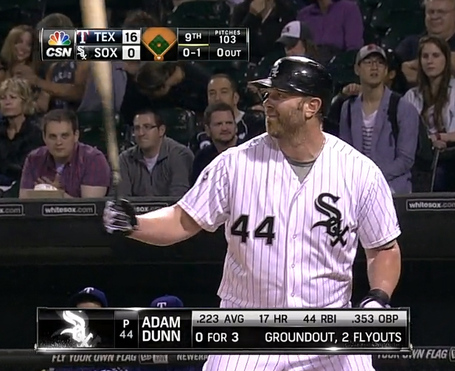 But how did they actually perform? Let's compare them with a...

TALE OF THE TAPE!