John Danks' progress stalls after rough start to second half

Share All sharing options for: John Danks' progress stalls after rough start to second half

John Danks threw his worst start of 2014 against the Texas Rangers on Tuesday, but even though he failed to complete the fifth inning, he still lasted long enough to eclipse his innings total from the previous season.

That should be great news, because it's still only the first week of August. He's still on pace to approach 200 innings, which would be quite the accomplishment after capsule surgery.

It's a difficult time to celebrate, though. Danks finished the first half with a 3.99 ERA, but forfeited the first-half gains with his four starts since. The season-to-season numbers now look too similar to consider anything an accomplishment:

You can point to some successes for Danks. The win-loss record reflects a greater number of quality starts along with a surge in run support, but some of the non-quality starts fell well short. Likewise, he's allowed fewer runs despite allowing more earned runs, which counts for something, and the increased walk rate was reflective of fewer meatballs. Until late, at least.

Those last four starts just sat on the cake. He shot up to the top of the league lead in gopher balls by throwing nine of them over his last 21 innings, which is a big reason why he's allowed 24 runs (10.29 ERA) over that stretch.

I don't think it's a coincidence that he's hit this wall while approaching last year's innings total, because fatigue might be Occam's razor here.

It's not showing up in velocity, though. In fact, his radar-gun readings, while a tick below last year's, have remained remarkably consistent start to start. If anything, he's cranking it up half a notch. 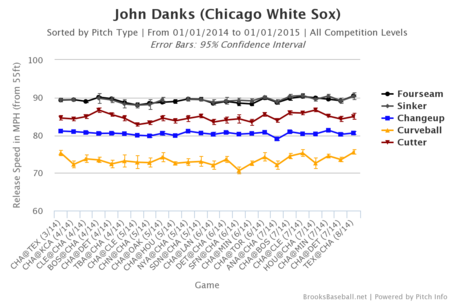 If you look at velocity alone, nothing's the matter. But that's only half the battle, and when it comes location, that's where Danks is slipping. Walks are part of the problem -- Danks has nine of them over 9⅔ innings -- but his strikes aren't as successful, either.

Brooks Baseball helps here by keeping track of "grooved pitches," and Danks is experiencing a second rise in frequency of them this season. He solved the first one by shifting over on the rubber, but the start of the second half isn't so kind: 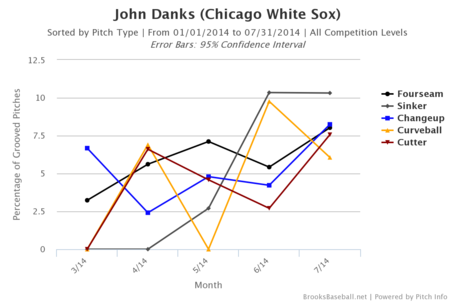 You can especially see that happening with his changeup, which has been drifting up over the course of the season (with a corresponding drop in vertical movement). 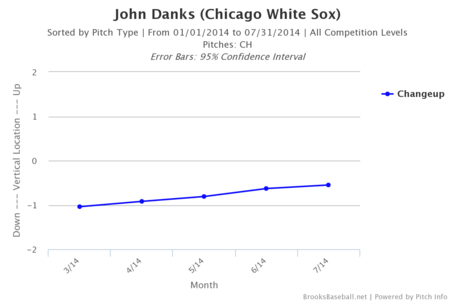 That's an easy enough illustration, but here's where it gets tricky: Tuesday's start was the worst of Danks' season, and Brooks said he didn't groove a single pitch.

That sounds impossible, but when you look at his chart, there's a distinct hole in the middle of the strike zone. And when you look at the barrage of homers, you'll see that three of Danks' four pitches probably weren't strikes.

The second home run, which Robinson Chirinos belted to straightaway center, came on a fastball up and on the outer half. Danks has been getting killed on his fastball this year -- or since he came back from surgery, to be more precise -- so he got what he deserved there.

But Adrian Beltre golfed a low changeup out to left, J.P. Arencibia yanked a low, inside-half fastball into the White Sox bullpen, and Chirinos pulled an inside fastball to the same place to end Danks' evening. The only constant is that Danks didn't hit the mitt, but we've seen worse misses. That probably explains his expressions, which evolve from "chagrined" to "incredulous" to "punch-drunk."

Ever since the shoulder problems robbed Danks of his best velocity, he's dealt with a much smaller margin for error. That's nothing new to 2014, but Danks' respectable first half raised hopes that he had adjusted to his limitations and honed his approach.

Genuine improvement remains plausible, because Danks' first 19 starts this season blow away any similar cross-section of his 2013 game log, and there's plenty of season left. He still has time to stop the bleeding and render July-August a mere rough patch.

The timing of this cluster turns his starts into moments of truth. If he can't turn it around, his 2013 performance might just represent Danks' new normal no matter how hard he fights it, and his best hope at living up to his contract is providing considerably more of the same.