Chase Utley's takeout "slide" could be the tipping point

If a "baseball play" doesn't really resemble baseball, is it one?

Share All sharing options for: Chase Utley's takeout "slide" could be the tipping point

It was only a few weeks ago that the Cubs' Chris Coghlan knocked out Pittsburgh's Jung-Ho Kang with an aggressive slide. Coghslan attempted to break up a double play by taking out Kang with a wide path. His first point of impact was Kang's leg instead of the dirt, and Kang suffered a broken left leg and torn knee ligaments, ending his season.

However, we've seen wider and higher slides, and it was on the first base side of second, so it ended up being difficult to legislate against, as any guidelines could rope in accidents, or injuries caused by fielder carelessness.

Chase Utley's slide on Ruben Tejada Saturday night, though ... that will probably result in some rule changes.

Here's a case where the fielder did make himself vulnerable. Usually, the more time a middle infielder spends on top of second, the more responsible he is for his own well being. Tejada couldn't make a quick exchange, and he had his back turned to the bag, so the instinctive move should be to take the out and get out of Dodge, rather than attempt to hang in and turn two.

Even then, look at how and where Utley slid. 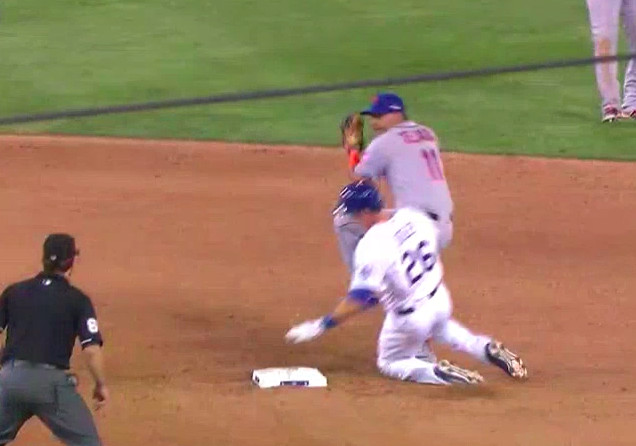 Utley never touched the bag, because by the time he slid, the bag was behind him.

Joe Torre called the slide "a little late," and while that sounds like a weak description, he also broke the news that the Arizona Fall League is going to require players to slide into second base on such plays. He issued a judgment, even if mild, then paired it with speaking out of school about a rule experiment. That's stronger action than we've seen on this play previously, via Rule 5.09:

Rule 5.09(a) ... The objective of this rule is to penalize the offensive team for deliberate, unwarranted, unsportsmanlike action by the runner in leaving the baseline for the obvious purpose of crashing the pivot man on a double play, rather than trying to reach the base. Obviously this is an umpire’s judgment play.

The Utley "slide" exposes two loopholes. For one, the area behind the bag isn't out of the baseline because momentum on normal, innocuous plays carries baserunners into that zone. However, leaving it in play for the impact point of violent takeout slides strikes me as against the spirit of the rule. And umpires seldom make the judgment that the runner didn't try to go for the bag, even when it's patently obvious:

Utley slide from a month ago pic.twitter.com/k8hoUUpq5g

That's been deemed a "baseball play" because umpires don't say it isn't,  and so the definition of "baseball play" gets expanded by edge-seeking baseball players until it stops resembling baseball. Even the players who defended Utley could only rationalize the instinct, and not the mechanics of the play. That's where it differs from the Coghlan slide, which was a slide-looking move started at the time a player slides to be safe.

If your slide starts with your knees instead of your feet, that's a wrestling move. If the bag is behind you by the time your slide starts, that ceases to be baserunning. I doubt that Utley was intending to injure Tejada, but that's the kind of slide he would use if he were trying his damndest to put Tejada in the hospital without being suspended himself. It's a distinction without a difference, so it seems like the time for MLB to start drawing harder lines.

The question for me is whether MLB should use replay to enforce it. I can imagine a scenario in the year 2023 where the umpires stop play to call for a review of this kind of play, and an official in New York sees a baserunner clearly aim for the players' legs behind the bag using blunt instruments. The ruling comes in: Targeting. Baserunner is out. Baserunner is ejected. If baserunner has been ejected for targeting before, he is subject to a suspension.

I don't know if I like that future, but it seems like a firmly worded rule could change the way runners approach second base to the point that it would seldom come into play. Catchers and baserunners have found ways to create home plate excitement around Rule 7.13, which is now rarely spoken about after a rocky introduction grabbed headlines in its first year. Collisions were exciting, but artful slides have taken their place, and nobody's any worse for the wear. Especially defenseless defenders.