Alexei was one of KW's greatest pick ups of all time but it is time to move on, $1 million buyout:

Geo proved to be a great back up and I plan on teaming him up with his old platoon partner from Texas.

No. 1: Mark Buehrle (one year, $6.5M). Provided he wants to come back for one last year and is healthy, I don't mind the organization going in this direction.

No. 2: A.J. Pierzynski (two years, $7M, 500k buyout ). I only see the sox and twins as potential homes for Pierzynski and a platoon of both him and Soto should provide above average results.

No. 3: Steve Pearce (one year, $4M). coming off a down year provides solid upside while affording the team positional flexibility.

I would also sign additional 5th & 6th starter types with invites to spring training in case of emergency or if Montas falls flat on his face.

No. 1: Tyler Flowers for Brad Miller. Seattle desperately needs a catcher as Zunino hasn't panned out and Miller has been a disaster in CF and lost his spot at SS to Ketel Marte. Hahn has actively been trying to upgrade catcher for sometime and while I feel pitch framing is important I feel it is being vastly over-rated currently. Even Dave Cameron is skeptical how much value you should assign to the catcher for framing the pitch and the pitcher for locating a questionable pitch that has the ability to be framed.

No. 2: Erik Johnson, Avisail Garcia & Spencer Adams for Martin Prado & Marcell Ozuna. The marlins need young cheap pitching Johnson provides that and Loria has consistently shown a propensity for not wanting to pay anyone more than league minimum, taking all of Prado's salary and their outspoken outfielder in Ozuna solves some of their issues while giving them a lottery ticket in Avisail to play in left and a promising young arm in Adams.

No. 3: John Danks + 6M, Micah Johnson & Courtney Hawkins for Braden Shipley, Cody Reed & Phil Gosselin. John Danks would've ranked second in fWAR and innings pitched on the d-backs staff, they've got some great young arms coming up but they need innings pitched to break their staff in. Johnson replaces Chris Owings at second base while fitting into their aggressive strategy on the base paths (2nd in SB overall in the league) and Hawkins is a change of scenery lotto ticket going to a system that has had a lot of success in developing young hitters. Shipley appears to be a possible 3/4 on a staff in a year and a half, possibly two, Reed has a lot of potential but has issues with conditioning and is a long way away and Gosselin is a solid utility player.

No. 4: Adam LaRoche for Jonathan Papelbon. This is a bad contract / "cancer" swap, both are FAs after '16. LaRoche goes back to a place where he has had modest success backing up the oft injured Zimmerman and providing a left handed bat off the bench. The nats rid themselves of Papelbon and the sox get a high leverage reliever with a chip on his shoulder.

I firmly believe that Thompson has the possibility to be like Brandon Crawford and Randal Grichuk; a tools player made good on said tools even with mediocre minor league results.

Moving Eaton and cementing Trayce in centerfield while adding Ozuna and relegating melky to DH and 5th outfielder drastically improves the defense; the amount that Cabrera, Eaton and Garcia gave away out there is sickening. The fact that the sox had the best starting pitching by fWAR in the AL is a testament to the staffs ability and why we shouldn't be moving any of them and should be supplementing them with better defense across the diamond.

Miller provides the sox with at the very least a utility man and bridge to Anderson with the potential for a solid regular.

Understandably a lot of people are skeptical of Carlos Sanchez, but he is only 23 years old and a switch hitter. The fact that he had even modest success at the major league level in the second half should be very telling, the organization loves his glove and his bat should come along. Young hitters take a while, it is even more pronounced in switch hitters especially power. Carlos could be a fixture for the sox for a long time to come and I would like to see the sox give him a very long leash. 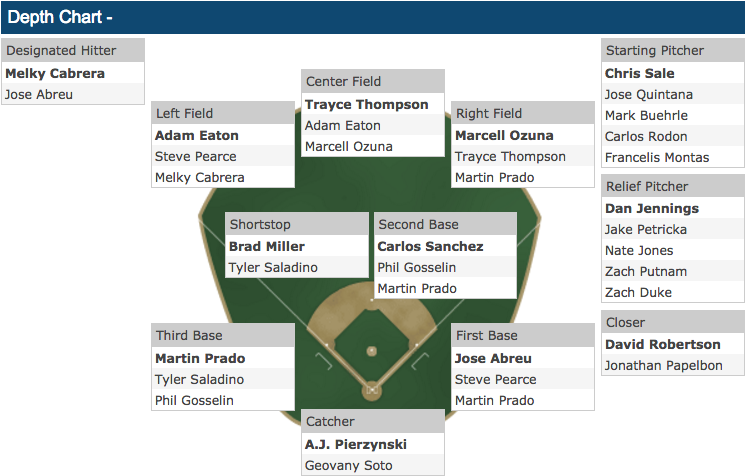 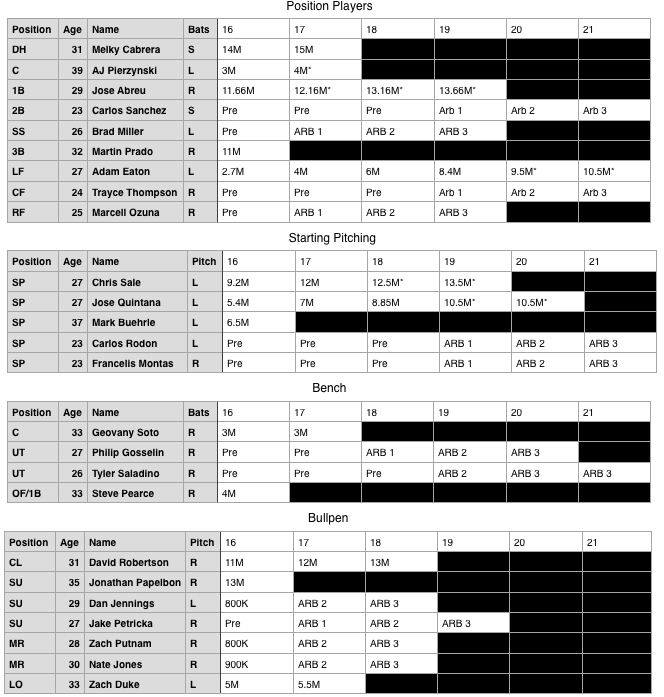 The payroll should sit approximately at $115.46M; thats including Alexei's buy out, dead money from Bonifacio & Peavy and the 6M sent along with Danks to Arizona.