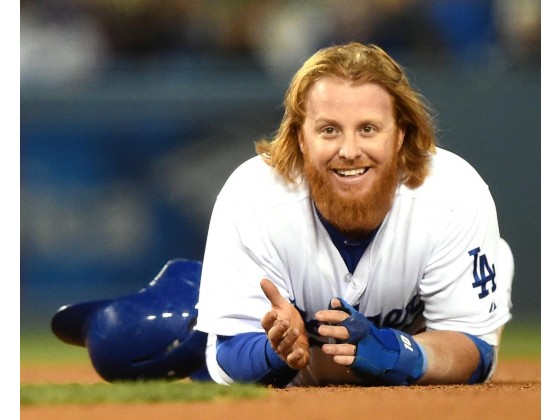 It's time to get comfortable with the idea of a ginger lumberjack playing 3rd (HARRY HOW, GETTY IMAGES)

With so many other holes to fill, a one year gamble on Alexei at this price makes sense. And if the team is in contention with him as a weak spot, the idea that Anderson could come up and provide a late season lift is not out of the question.

Payroll sits at 103.7 with the in house guys taken care of thus far.

Iannetta has a couple things going for him, and a clear role. A career 252/383/477 mark against LHP make him a strong part of the catching platoon, and he has the framing chops to keep pitchers and Jofp happy. His free agency came a year too late, so his meh performance in 2015 should make him attainable.

Leake's track record over the last 3 years shows a few very attractive things: 30+ starts, an average right around 200 IP, and a ground ball rate in the top 1/5 of qualified starters, obviously a help where he would be starting his home games. Since he was traded last year, there is no comp pick attached.

Joyce was a reliable lefty bat his entire career before suffering a huge fall off last year. His BB/K rates were not too alarming, and a .215 babip obviously did not help matters. This would be another buy low, with the hopeful payoff of an above average offensive player (against RHP). Joyce might appear somewhat redundant after jettisoning LaRoche, but he is 5 years younger (so the odds of a bounce back may be more likely), has been a good baserunner, and plays the OF, which provides insurance if TT falls on his face. Having 4 regular OF with no assigned DH should allow flexibility and allow some rest for guys who tend to run into walls.

This move continues with the theme of putting a competitive team on the field while waiting for reinforcements to arrive. Turner is a late bloomer who figured some things out in LA after being non-tendered, and combined to put together 7+ fWAR the last two years, though there was some ridiculous babip luck helping that. He has also developed into a reliable defensive 3B. He has 1 year to FA (projected 5.5 arb) and with LA already giving the best prospect in baseball a taste of his eventual home at 3B this year, he probably can be had. One year of Turner for a guy like Johnson and some stuff seems fair, as LA somehow managed to put together a $300 million payroll with 2 reliable starters last season, and can use depth, even if it is averagish.

No. 2: Montas and Micah to Tampa for Jake McGee

From all indications, Montas has an outside shot at becoming a starter, but is more than likely a late inning flamethrower. McGee missed half of last year because of knee surgery, but has been one of the best 10-15 relievers in baseball the last 3-4 years. He's now getting closer to free agency, and is expected to earn close to $5 million this season, a lot of money for a setup guy for a team with a lot of financial constraints and an ability to seemingly turn any kind of spare part into a competent bullpen piece. From the Sox perspective, they're aping part of the KC formula of recent years, and shortening the game. McGee is a lefty who is even more devastating on RHH, and would be the 8th inning guy, with no concern of who was coming up. It also allows everyone else to be bumped down a notch. Nate Jones, 6th-7th inning strikeout guy sounds a hell of a lot better than Nate Jones, high leverage 8th inning set up guy.

This plan isn't the sexiest, and probably won't result in drunken season ticket purchases, but as this team has show us time and again, offseason sizzle and on field success are not always strongly linked. These moves, combined with full season presence of TT and Sanchez will result in a much improved defense, an offense with a few more dingers, a fair amount more runners on, and what could be a monster bullpen. All while not sacrificing any top prospects or giving away picks.