Share All sharing options for: Mellie Wolfgang: From the Baseball Hall of Fame Library Player Files

A few weeks weeks ago, John Thorn, the official historian of Major League Baseball, gave a lecture at the Albany (N.Y.) Institute of History and Art, as part of the first month of the museum's "Triple Play" exhibit.

Thorn's presentation was worth it, but the highlight of the visit was the corner of a room dedicated to a player whose Baseball-Reference.com page I'd never clicked on: Meldon Wolfgang. 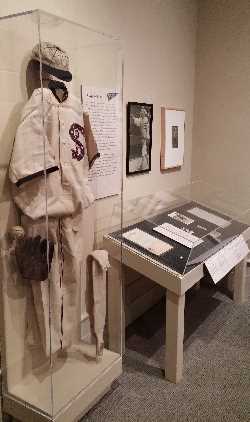 Who was Mellie Wolfgang?

Mellie Wolfgang was a pitcher for the White Sox between 1914 and 1918, used mostly in relief. One of the club's many, many spitballers over the first two decades of the franchise's existence, Wolfgang posted a 2.18 ERA (128 ERA+) over 326 innings.

For one of the big reasons I researched George Davis in this series -- he's one of the few White Sox to hail from New York's Capital Region (although Casper Wells at least brought the spotty connection into the new century). Also like Davis, Wolfgang belonged to a World Series-winning White Sox team, and AIHA has his 1917 ring on display, along with his uniform and other mementos.

Unlike Davis, Wolfgang's family maintained an Albany home even while he played for the Sox. I could relate to his wife here:

And so that was reason enough for me to head to Cooperstown to go through his folder. But beyond geography, Wolfgang holds the distinction of being one of the franchise's shortest pitchers. B-Ref lists his height at 5'9", but as you'll see from the news clippings, chances are he was at least two inches shorter. If he were 5'9", the accounts of the day wouldn't have harped on his build so much (as we saw/didn't see with Eddie Cicotte, another 5'9" pitcher).

How he got to the White Sox

He quickly ascended the ranks of professional baseball in the Northeast. He played for his hometown Albany Senators for two seasons, then moved on to Lowell of the New England League. There he strung together three consecutive 20-win seasons, including a 27-5 campaign in 1912. During that season, he made league history by throwing 10 perfect innings against Lynn. It didn't count as a no-hitter because it was broken up with a leadoff single in the 11th, but he did go the distance in a 12-inning shutout.

These achievements drew the attention of big league teams -- first the St. Louis Browns in 1911 and 1912, and the White Sox in the seasons after that. When they took an up-close look at Wolfgang, however, he didn't impress that much. From a Chicago Tribune story on March 1, 1913:

Pity the pitcher who isn't tall and rangy, for his troubles begin when he seeks steady service in the major leagues. That's the lament of one Meldon Wolfgang, rusty-haired moist-ball flinger here with Skipper Callahan taking the water cure. Wolfgang's tale is a pathetic little thing dating back over three years, with stellar scenes laid in minor campaigns and big league spring training. This is his third attempt to cop a regular berth, and the Lowell star has promised to make good with the grace of the sox officials.

"I've been turned down so many times I'm really used to it," said Mel, squaring away for the customary interview on his past, present and future in the game of baseball. "I got my first taste of the harpoon in 1911, when the Boston Nationals, managed by Fred Lake, turned me back. The same thing happened the spring of 1912 when Bobby Wallace, then leader of the St. Louis browns, told me I was too small. I hope Manager Callahan don't hand me the same story."

Callahan had more disappointment in store for Wolfgang, sending him to Denver for one final year in the minors despite what the Chicago Daily News called "some corking pitching" that spring.

How short was he?

From a 1911 clipping: "Wolfgang is a right-hander, but not a big fellow, for he weighs but 150 pounds and stands 5 feet 7 inches, but he is said to have a lot of speed at that, with the required amount of twists."

From the Daily News: "Mel is 5 feet 6 inches tall and weighs 150 pounds, so he does not stack up in size when standing beside Ed Walsh. His hair is fiery red, and he has all the pepper that goes with such a color."

From the Tribune: "Wolfgang, who is a native of Albany, is 23 years old, five feet seven inches in his running shoes, and scales at 155 pounds. In build he is a dead ringer for Jimmy Lavender, the crack spit ball heaver of the cub machine."

Precious little is included, mainly because nobody really wrote about relievers back then. He appeared in 77 games over five years -- 27 of those were spot starts, and he completed 15 of those. The bullpen was an afterthought when he made starts, so they really didn't write much about him when guys like Cicotte, Lefty Williams and Red Faber were members of the front line, even if Wolfgang was among the more reliable of the second string.

One notable exception is Aug. 30, 1914, the day after Wolfgang outdueled Walter Johnson for his first complete game. He did it all - not so much with strikeouts, but with his defense - according to the Chicago Tribune:

Little Mel gave such a pretty exhibition on the slab that even the Washington fans applauded him. He held Griffith's athletes to seven hits and two of them coming in the ninth prevented his shutting out the enemy. Along with his careful and precise pitching he showed splendid fielding stunts. In all he got ten assists, which is some assisting for a pitcher.

Otherwise, he only appears as a batting practice pitcher during the World Series. He pitched just 26 innings across 1917 and 1918 due to poor health (a 1968 Albany Examiner clipping says "illness constantly plagued Mel," but it's not specified). Instead, his throwing was contained to before the games, as he helped give the hitters some swings. He received a World Series ring for his contributions, but he wasn't much for celebrating. From the Evangelist:

Wolfgang returned to Albany after the close of the series and was given a hero's welcome, which he didn't relish. He was a modest man and shunned fanfare.

Further research on the return took me to a genealogy blog written by his grandson, who also lived in the Albany area, and died in 2013. He reprinted the article from the "local paper," which recaps his reticence:

At the beginning of the dinner, Wolfgang was presented with a floral horseshoe and the little North Albany lad hid behind the piece throughout the banquet. Toastmaster Cooke paid his final tribute to Mellie in presenting a diamond fob to him. The diners yelled for a speech, and Mellie, in his unassuming and modest way, said simply, "I am happy. I’m glad. I certainly thank you all. I don’t deserve this.  Thanks."

Wolfgang returned to Albany after his career, and that's apparently where he spent the rest of his life. He died on June 30, 1947, at the age of 57. The cause listed on his death certificate is a cerebral hemorrhage, and the address listed on it is now an empty lot in an industrial area.

Previously in this series: