The White Sox have two days off this week, and Adam Eaton might need them more than anybody.

The leadoff man's sophomore season on the South Side isn't starting the way everybody envisioned. He's 2-for-25 with zero walks, giving him a batting average and OBP of .080.

If you like narratives, you might say that the five-year, $23.5 million he just signed is causing him to press. If you're not into overarching themes, then it's just an ugly bunch of games.

It has all the telltale signs of bad luck. First of all, he's only struck out twice, so his batting average on balls in play is a piddly .087, one year after posting a BABIP of .359.

We could cut this post right here by just looking at the ends, but Eaton is doubly suffering, because the means to those ends are nearly as unfortunate.

During his third plate appearance on Sunday, Eaton took a strike and fouled off another pitch, putting him in a two-strike hole. I fired off this tweet ...

Eaton may as well come to the plate with an 0-2 count right now.

... but I didn't really have any idea of whether that was true. But when he took a strike and fouled another one off in his next at-bat, it piqued my curiosity enough to take a look at how many times he was very quickly backed against the ropes.

The pitch logs say it's not that bad as an automatic 0-2 ... but it's probably as close as it can get over a random sample for a Major League Baseball-caliber hitter.

Whether taking or swinging -- mostly the former, since it's a part of his job -- Eaton has seen first-pitch strikes in each of his last 12 plate appearances. I went through Brooks' PITCH f/x data and compiled all of the first pitches during this time: 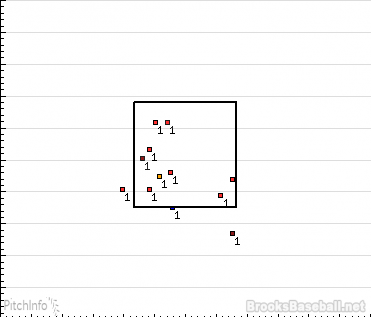 This little run has boosted his first-pitch strike percentage to 81 percent, which is a full 20 points higher than his career average. From that point, Eaton's on the defensive, and somehow very few of the pitches are any easier to take. Add up all of his last 12 plate appearances of the Minnesota series, and 33 of the 36 pitches he saw were strikes.

Given that it's just six games of data, this tells you that Eaton is likely suffering from an unlikely clustering of control and command, and he's due to see this trend reverse in the very near future. If he can't (or doesn't want to) wait for regression, he should probably look middle-out. Either that, or figure out if there's a way he can use some of that $23.5 million to buy a good count.