White Sox could benefit from blinders

Share All sharing options for: White Sox could benefit from blinders

After two successful outings against minor-league hitters in Arizona, Chris Sale is back with the White Sox and ready to start on the long-targeted date of April 12 (Sunday to its friends).

Unlike last season, when the club initially underestimated his injury (elbow flexor muscle strain) and his recovery, then became frustrated with the media for asking about it so damn much, the Sox handled his broken foot far more efficiently. They never floated Opening Day as a strong possibility, but they didn't forecast a prolonged absence, either.

Sure enough, the Sox declared Sale ready to go before he needed a replacement in the rotation, and Sale sounds the part:

"It’s behind me," Sale said. "I was hurt. I’m not hurt any more. I think it’s time to take the blinders off and run the race."

As somebody who appreciates a competitor, I like Sale's spirit. As somebody who spends a few days at Saratoga every summer, I can't quite get behind the metaphor. In fact, when it comes to the first three days of the 2015 White Sox season, it's better taking it in the opposite direction.

A lot of race horses wear blinders, or blinkers as they're officially called. California Chrome wore blinkers to victory in the first two legs of the Triple Crown just last year. Go back further, and it turns out that he didn't win his first stakes race until he put them on.

"The blinkers really moved the horse up," Sherman said. "I didn’t want him to be on the lead."

Given that the Sox have chosen not to set the pace out of the gate, perhaps they might benefit from blinkers themselves, because they're wasting a lot of time with distractions.

First, they have the unproductive -- and probably counterproductive -- exchange of purpose pitches that Jeff Samardzija ignited, rolling into a second day with still no apparent benefits.

On top of that, the early returns on the Vince Coleman-inspired aggression on the basepaths: zero stolen bases and three baserunning outs. Micah Johnson was picked off in the opener, Carlos Sanchez was thrown out trying to advance on a pitch in the dirt, and Adam Eaton was easily gunned down by Salvador Perez in the eighth.

And earlier in the day, I saw this exchange in a chat with Kansas City Star beat writer Andy McCullough: 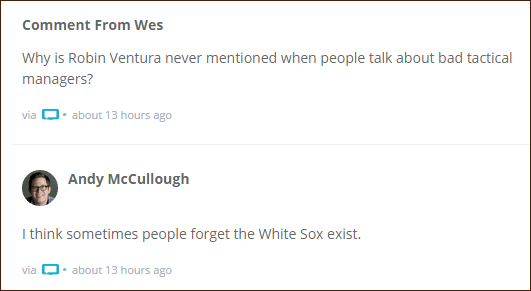 While I just wrote that Robin Ventura has the makings of a good manager, I wouldn't blame Royals fans for thinking Ned Yost has him beat in the strategy department, because Ventura has a rich history of making strange calls against Kansas City, especially with the intentional walk.

In 2012, Ventura called for four IBBs to Jeff Francoeur, including two by Sale. Likewise, he's the only American League manager to pitch around Chris Getz on purpose with two outs. That habit rolled into Opening Day, when he called for Dan Jennings to bypass Kendrys Morales to face Alex Gordon.

And then Ventura made an even stranger decision in the eighth inning on Wednesday by pinch-running Johnson for the not-slow Sanchez. Johnson was forced out at second in three pitches, leaving Ventura with a significant defensive downgrade for the rest of what was a tie game. Ventura's managing isn't nearly the biggest reason why he has a 21-38 lifetime record against the Royals, but thrashing in quicksand hurts more than it helps.

Funny thing is, the White Sox twice tied Wednesday's game while resisting the urge to force the issue.

Third inning: Avisail Garcia led off with a double to left center, and he was running hard enough out of the box that he had a reasonable shot at turning it into a triple. Instead, he gave his teammates three chances to cash him in, and Gordon Beckham came through with an RBI single.

Fifth inning: Jose Abreu doubled to the same gap to start the inning, but Joe McEwing held him at third when Garcia followed by dropping a single in front of Lorenzo Cain in center. Abreu ended up scoring on an Alexei Ramirez sac fly.

Throw in the three-run second, and none of the Sox's best innings included baserunners trying for an extra 90 feet.

I tend to be on the more patient/conservative side of talent deployment. Going back to my argument for Sanchez over Johnson, I want to see what the Sox can do with the most certain skills they possess over the first month of the season. If they still look short on production, then it's time to make riskier plays for upside, whether with their in-game strategy or their roster.

My attitude toward the Coleman Aggression Pact is similar. You know, don't reach for the jumper cables until you try starting the car a few times.

It wouldn't be bad advice for Sale, either. I know he's champing at the bit to get back in the game, but the last time he started in a game that counted, he spent a lot of time looking where the action wasn't.

That settles it -- blinkers for everybody!