Chris Sale is almost back to his old self

Improved slider key to his resurgence against Milwaukee

Share All sharing options for: Chris Sale is almost back to his old self

After two ugly starts in a row, Chris Sale looked more like the ace he's supposed to be against the Milwaukee Brewers on Tuesday night.

"It was big," manager Robin Ventura said. "He’s been trying to find it and get a groove going. It didn't start off that well. They got the triple there and got on the board first but we clawed back and after that I thought he really settled down and had command of a lot of stuff. He was throwing strikes, getting them to swing early.

"This is just a little more vintage of what you would expect out of him."

As was Tyler Flowers:

"All in all [Sale did] a good job attacking guys," Flowers, his catcher, said. "He did a good job down and away to righties, that’s usually a tougher pitch for him, that gives him a pretty decent weapon to challenge them if they want to be aggressive early.

So, has The Condor returned with all his powers? If we use his slider as the litmus test, not quite -- but he's getting there.

Only 12 of his 110 pitches were sliders, which is in line with his other starts, and well below his breaking-ball rate usage from the previous seasons:

The first big drop was by design, as Sale said the changeup was easier on his arm, and it helped keep his overall mechanics calibrated.

This drop is because it just hasn't been that sharp for him this season -- especially the horizontal action. He's thrown more spinners than diggers, and the lack of conviction is why (and because) lefties are 7-for-13 (.513) against him this season after going 20-for-121 (.165) last year.

Given that Sale didn't have a spring training, it's reasonable that his breaking ball would lag behind his fastball and changeup in terms of crispness. Better yet, he showed signs of progress with that slider against Milwaukee, outside of that the hanger to Elian Herrera. Let's look at his pitch chart:

Sorry, wrong one. Actually, it's pretty much the same thing.

Look at all those red dots below and left of the strike zone. That's good stuff, and the numbers say it had more of its classic movement, horizontally and vertically. It's still not all the way there, but it's heading in the right direction, and it's possible that Sale's usage might've been more limited by Milwaukee's entirely right-handed lineup than the quality of the pitch itself.

I'm also inclined to think he felt more comfortable because he wasn't going balls-to-the-wall with his fastball at the start of the game. Compare his velocity chart from his Detroit start to his Milwaukee outing: 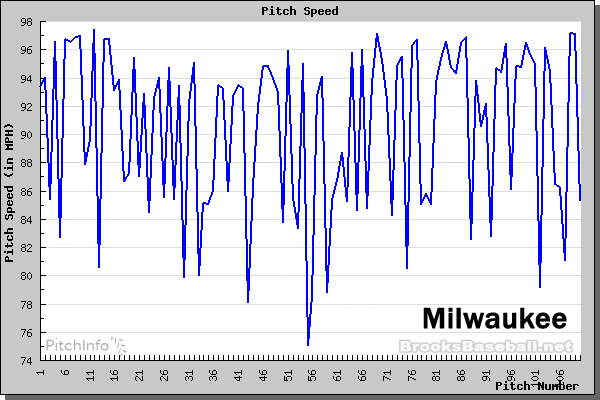 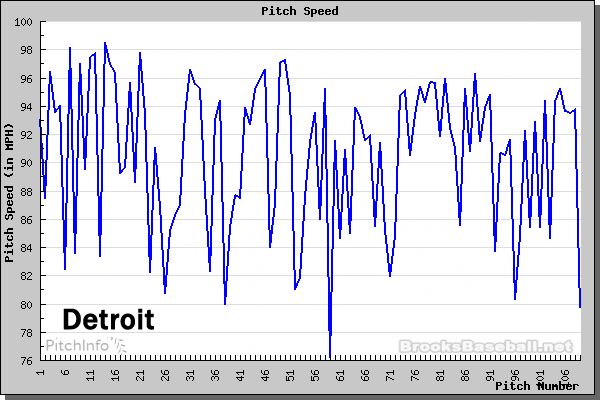 Sale only topped 96 once after his 50th pitch against Detroit. For the Brewers, he saved his some of his best heat for the second half of the game, and also mixed in more two-seamers than usual. This looks more like a pitcher who is in control of his game, and based on the quotes from before the start, Don Cooper would probably agree:

Sale was coming off two uncharacteristically tough starts in which he had allowed 13 earned runs over 8-1/3 innings. Pitching coach Don Cooper said before the game he thought Sale was trying to do too much in those outings.

"When you see his velocity up a mile and a half, when you see not as many strikes, they're definitely trying to do too much," Cooper said. "(Sale's) trying to strike everybody out with strike one."

Sale's hottest fastball didn't measure up with others from his previous starts, but his average velocity was right in the middle of the neighborhood. That certainly looks more like the old Sale, and when he starts snapping off that slider against hitters who really need to see it, we'll know he's back all the way.