Two days on the basepaths with the White Sox

Share All sharing options for: Two days on the basepaths with the White Sox

You don't need to look at numbers to know the 2015 White Sox have been a disaster on the basepaths, but the numbers do provide a sense of scale. The ratio between "seems" and "is" runs pretty close to 1:1.

Entering Wednesday, FanGraphs pegged White Sox baserunners at 11.9 runs below average. which is by far the worst in the league. To give you some context, they were the second-worst baserunning team in baseball last year ... at -14.2. They've pretty much used their entire allotment of bad ideas in the first quarter of the season.

That's amazing in and of itself, but it's even more stunning when considering that the Sox made a big deal about honing this particular facet during spring training with the help of Vince Coleman. Little did the Sox know that Coleman's cure for what ailed the Sox turned out to be patent medicine.

The last two games in Toronto provided a whole lot of examples of just how difficult extra bases are to come by. On one hand, this is an indictment of the effectiveness of the Robin Ventura administration. Yet after watching the Sox offense sputter to life over a couple of days, I get the idea that Ventura's players haven't given up on him, or each other.

They don't want to be this bad on the bases. For the most part, they're trying so hard. They really are.

Let's get the bad ones out of the way first. The Sox lost two precious baserunners via TOOTBLAN (Thrown Out On The Basepaths Like A Nincompooop) on Wednesday. J.B. Shuck's wasn't particularly offensive, as he tried to take second after his RBI single when Kevin Pillar misplayed the hop.

If we weren't on high alert for lost baserunners, this decision probably wouldn't register. Shuck had just driven in the run, it was the second out at second base (not a mortal sin by rules of thumb), and it required Pillar to make a nice recovery to record the out.

Alas, it still felt regrettable -- not just because of the entire season's body of work, but also because, earlier in the game, Jose Abreu was picked off at second base to end the second inning, and for no good reason.

It looked like Abreu (probably?) got his foot back before the tag, but any good angle was blocked by umpire Andy Fletcher. Either way, it should have never been that close.

Remarkably, the White Sox were 2-for-2 in this category, which means they're now tied for last in steals in this category with the Dodgers, rather than bringing up their rear by their collective lonesome. They're also better than the Dodgers in terms of percentage, needing "only" 23 attempts to get to 11 steals, versus 25 for Los Angeles.

There's some normalization at play. The Sox started the season 5-for-15, which left some scars. They've only attempted eight steals over the last 17 games (and been successful six times, so, hey).

Yet the Sox could have easily been 0-for-2, as the throws from Toronto's catchers beat the Sox to the bag on both occasions. The tags just didn't get the job done.

Here's Ramirez technically stealing on the combination of R.A. Dickey and Josh Thole on Tuesday, though he accomplished the feat because Jose Reyes looked like he was trying to catch the knuckleball.

Wednesday afternoon, Russell Martin's throw had Shuck far deader. The ball beat him to the bag by plenty, but he beat Ryan Goins' tag with a remarkably athletic slide that needed a good Robin Ventura challenge to see to believe.

Mike Trout made the same kind of slide at third a couple days ago, which prompted tweets and blog posts and everything else with these descriptors:

Then ol' J.B. Shuck does the same thing, and the baseball world rises as one to proclaim, "Never heard of him." Alas. You can apply the same adjectives in this case, which would be more exciting if this kind of incredible evasive maneuver weren't required to record a stolen base for the White Sox in 2015.

(Mike Trout was nothing more than desperate, is basically what I'm saying.)

On the subject of unorthodox slides to avoid doom, Abreu did end up making a positive difference on Wednesday by motoring a double into a triple to lead off the 10th. He almost needed a grappling hook to stick to third base, but that effort changed the complexion of the game.

He scored on Adam LaRoche's single to give the Sox a 4-3 lead. Once Emilio Bonifacio replaced LaRoche at first base, more good baserunning followed:

That might not seem like a remarkable move by Bonifacio, but this awareness hasn't been easy to come by. The day before, Shuck cost Tyler Flowers an RBI when he held up on a bloop single to rightish center that Pillar had no chance of catching.

Hustle and grit, gristle and hust

When a team is struggling to hit, they can look lazy, lethargic, unprepared, etc., etc. But at least on Tuesday night,the Sox managed to use energy on the basepaths to prop up the attack despite some meek at-bats.

In the top of the sixth inning, Adam Eaton hit a grounder to third. It should've been a rally-stunting 5-4-3 double play, but Josh Donaldson double-clutched, which allowed Eaton to reach. It also allowed Carlos Sanchez to slide hard into Goins at second. It probably wasn't necessary for Eaton to get to first, but appreciated nevertheless.

After Sanchez softened up Goins, Eaton had an opportunity for the same on a potential inning-ending 6-4-3 ball. Eaton seized the day, tenderizing Goins with a takeout slide that pretty much put the tying run on the board, when you see how little Melky Cabrera beat the throw by:

The only missed opportunity was in the broadcast booth: 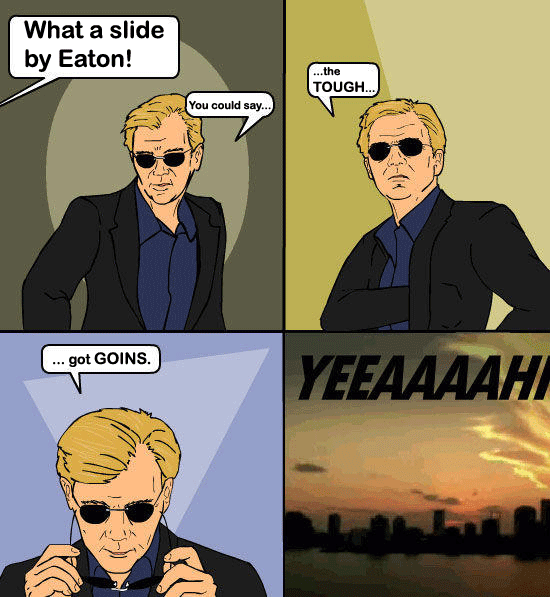 And after the ninth hitter and the leadoff man got their hard slides in during the sixth inning, the eighth inning gave Cabrera a turn. On a potential inning-ending 4-6-3 double play, Cabrera forced Reyes to jump while throwing. Abreu ended up being safe by a hair after a challenge by Ventura, and the go-ahead run scored on the play.

Another stat about the White Sox offense that wows in the wrong way: It's second in double plays, even with a below-average team OBP, and all the aforementioned outs on the basepaths. That's an incredible rate, but they hit a lot of grounders. Thankfully, in these cases, one weakness managed to cover for another, as good, high-effort baserunning thwarted multiple double plays.

While somewhat inspiring, these clips are also troubling in that the Sox baserunning is its best when the hitters are doing their worst. At some point, both are going to have to be on the same page if they want a reliably functioning offense.

But to be fair, before the Abreu fielder's choice, Sanchez and Eaton managed to combine quality hitting and running in the same highlight. Consider this video a palate-cleanser: