Share All sharing options for: Seven games with Tyler Saladino

Tyler Saladino may not be the man the White Sox need at third base, but he's the right man for today, if only to highlight the absurdities emitting from the position players. The conditions were such that a minor-league infielder with a spotty track record usurped Conor Gillaspie and Gordon Beckham in a bloodless coup, and everybody's cool with it.

He's taken the shrinking White Sox world by relative storm by showing he can chew gum and walk at the same time. He's fielding. He's hitting. He's bunting (which, OK). None of these are remarkable in and of themselves, but in the setting of the 2015 White Sox, his ability to do jobs asked of him make him somewhat of an outlier. If this were "The Office," he'd spend most of his time breaking the fourth wall with an expression of alarm.

Saladino isn't the creation of writers who serves as an agent of the audience, though. He's an actual ballplayer with his own sketchy track record, and his flaws will eventually come into focus. Soon, he'll invite questions that he'll have to answer himself.

For instance: You don't win friends with Salad, but can you win ballgames with him?

Normally, I'd caution against getting too excited about Saladino as a starter and warn about overexposure. but we know the caveats about the White Sox and position players. If nothing else -- and sometimes there is nothing else -- they're well-equipped to immediately deliver hard truths. If that player has a flaw, you'll see it unfold and exploited time and time again.

Saladino, on the other hand, is hitting .308 over his first week. He pulled a homer, and closer to the left-field foul pole than Avisail Garcia has this year, and he's also added a triple. He's made all the plays he was expected to make at third and short. He's executed bunts when asked, which might end up hurting the Sox more than helping, but that's not his fault. All in all, he looks wholly confident, competent and prepared. Even if it's a flash in the pan, the Sox and their fans deserve one like this.

The question of his staying power has staying power, though, and it will take a while to resolve itself. Saladino is the most under-touted of the Sox' minor-league infielders for a reason, but the success isn't completely uncharacteristic. His minor-league track record is a bipolar one, with swings from "prospect with promise" to "organizational player" a couple times already -- including the last two seasons at Charlotte:

His history says you should believe the latter line, but if you want to be optimistic in the face of everything else that's happened this season, injuries provide cover. Saladino's 2014 season was cut short by Tommy John surgery, and the start of his 2015 was delayed by shoulder inflammation.

If I were to devise a story off these fluctuations, I'd say, "He plays better when he's not a priority." He played well at both A-ball levels, but his performance dropped off at Birmingham, which came after Robin Ventura invited him to major league camp toward the end of spring training. After a couple of down years, he became thoroughly blocked at Charlotte by Carlos Sanchez, Marcus Semien, Matt Davidson and Micah Johnson. That's when he revived his career by playing as well as any of them, even without a set position. Then, once the logjam cleared, he went back to scuffling.

That would make this starting job a harbinger of downside. Another harbinger: The last White Sox player to hit this well in his first seven games? Gillaspie, whom Saladino just replaced.

Beyond the narratives, it'd be cool if he could walk soon, just so he doesn't join the list of players who took forever to do so. In this case, fortunately, it's a product of how he's being pitched. He's seeing more strikes than any White Sox hitter so far. A lot of those strikes are middle-away: 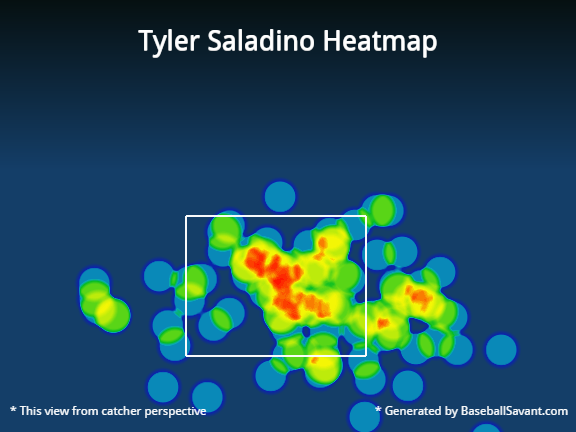 And so that's where his batted balls are going: 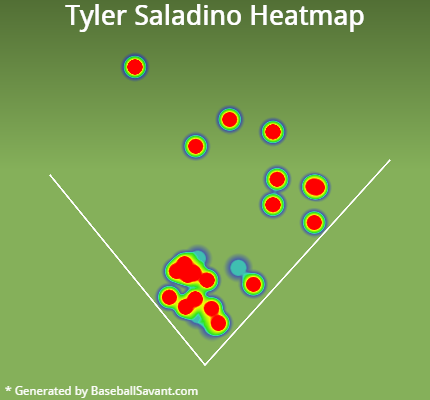 That's what was cool about Saladino's homer on Sunday. While Danny Duffy located his fastball well, it was a fastball situation (2-1 count, four-run lead), and Duffy had lost a couple of ticks off his heat by the time he threw his 113th pitch. A hitter should be able to jump on that, and Saladino did:

Whether he's bunting or swinging away, Saladino seems to have a good grasp on the basics, which is appreciated. Pitchers are daring Saladino to beat them, and he's doing that well enough. Soon, pitchers will be daring him to try walking, and that territory is even more uncharted for White Sox hitters. After an off day, the White Sox will get to face Michael Wacha, which will be as good a test as any.

Provided you can set aside the White Sox prospects' Red Klotz-like record against the strike zone, Saladino has offered reasons to watch his at-bats. From here on out, the hope is that he can stay healthy enough to keep answering the bell (he's doing shoulder work as a preventative measure), which would give him a shot at approximating Semien's production, since Saladino's emergence last season was one of the reasons why Semien was expendable.

That's not as high a bar as it initially seemed. Semien came out swinging this season, but he's hitting just .244/.290/.366 since May 1 while still flirting with a 50-error pace. Saladino's next mistake will be his first.