A select amount of kids from the Amateur City Elite (ACE) program got to participate in on-the-field drills at U.S. Cellular Field on Tuesday as part of the 2015 National PLAY Campaign. Created by the Professional Baseball Athletic Trainers Society (PBATS) in 2004, the PLAY campaign was formed to raise awareness about children's health issues across all 30 major league ballparks. In recent years, the focus has been steering kids away from using performance-enhancing drugs.

This year, the youth baseball players were participating in pregame drills, focusing on proper stretching, the importance of warmup sprints, working on technique hitting off a tee, and dental hygiene. Lucky for these ACE players, they were conducting these drills in front of the watchful eye of Herm Schneider, the longtime trainer of the White Sox.

With 37 years under his belt, Schneider has developed an uncanny ability to keep players away from the disabled list. From 2010-2013, no team in Major League Baseball spent fewer days on the DL than the White Sox and currently only two players, Matt Albers and Nate Jones, are on the list. This is remarkable in a time where the game is seeing an increase in injuries, specifically with pitchers, who go under the knife to have Tommy John surgery at an alarming rate.

Its not just Major League Baseball players that face this issue. The American Sports Medicine Institute has seen a significant rise in UCL surgeries since 1994 for youth baseball players under the age of 18.

I spent some time with Schneider to pick his brain on how the game of baseball can curtail this trend. For starters, we have to take into account that today's kids are much different than past generations.

"Why are kids getting hurt? I think kids are getting stronger, " Schneider said. "They are more powerful than they used to be and that plays a toll on the ligaments. Muscles, they get big and strong but the ligaments just can't hold on. That is when we start seeing elbow injuries."

Another factor is hyperspecialization for children playing sports. More and more parents are having their children play one sport to enhance their ability to be recognized by college recruiters and scouts, resulting in either college scholarships or professional contracts. David Epstein, author of "The Sports Gene," wrote an op-ed in the New York Times in 2014 on this very subject about the dangers of hyperspecialization, and Schneider agrees.

Even if kids are playing other sports than just baseball, youth pitchers still face the risk of requiring UCL surgery before the age of 18. Schneider believes the amount of surgeries would be reduced if youth baseball slowed things down and focused on mechanics, not miles per hour.

"Biggest thing is teach kids how to throw correctly," Schneider said. "Tommy John is not an act of God. It is something that we do to ourselves."

"If you have bad mechanics you are going to hurt yourself. The old saying was no breaking balls, curveballs, or sliders until you can shave. Unfortunately for baseball today, the thought process is 'How hard can I throw?' Well, when you start trying to throw real hard, sometimes you give up your mechanics to throw harder. When you do things a bit incorrectly, it's just a matter of time."

On episode 42 of the South Side Sox podcast, I interviewed Will Carroll, who for years has been writing about sports injuries and wrote "Saving the Pitcher: Preventing Pitching Injuries in Modern Baseball." During that interview, Carroll called Schneider and his training staff "miracle workers" for their ability to take pitchers with unorthodox deliveries (such as Chris Sale) and damaged pitchers coming off Tommy John surgery (such as Matt Thornton), and work with them to maintain maximum effort while diminishing injury risks.

This ,makes many in baseball wonder how the White Sox do it. How do they keep starting pitchers on the mound? While it seems most teams and fans are most worried about elbow injuries concerning pitchers, that body part is not Schneider's biggest concern.

That would be the shoulder.

"Shoulders are a real phenomenon that nobody has a real good handle on it yet. So that's our No. 1 problem. We never try to use the 'S' word on a shoulder. On an elbow we prefer not to use it, but the results on an elbow are certainly much more predictable than a shoulder is," said Schneider.

"Because the elbow is a hinge and you got a pretty good idea on how to help a kid with Tommy John if it comes to that. The shoulder is like being out in space, it goes every which way. That's why we really try to avoid surgery on shoulders."

To help avoid shoulder injuries, Schneider has put into place a plan for pitchers to follow after each start. Having pitchers remain compliant to the plan is why he believes is a big part on why the team has avoided many trips to the disabled list.

Day one after a start: The pitcher will participate in 10-15 drills focused on the shoulder. The next set of drills focus on getting fresh blood flowing to heal micro-tears in the shoulder that work concentrically and eccentrically on recovery. Finally, pitchers will work with trainers on their general endurance as well as leg and back work.

Schneider said of Sale, who the night before pitched a complete game against the Toronto Blue Jays, "Today will be a harder day than yesterday. Yesterday was probably a breeze compared to what he has to do today."

Day two after a start: The pitcher will throw a bullpen session with pitching coach, Don Cooper, to focus on their sport-specific issues.

Day three after a start: Repeat of the first day, but pitchers only conduct half of the drills. This is aimed to get the body to temper down.

Day four after a start: A rest day, in which Schneider doesn't prefer to see the pitcher unless absolutely necessary.

White Sox fans are familiar with the severity of shoulder injuries, with both John Danks and former Sox pitcher Jake Peavy losing significant time. Those experiences became valuable lessons for Schneider, as each shoulder injury was unique in its own way.

"When you get to the level that we are at here, it's hard to change the spots on a leopard. Players are what they are, and we had to repair Johnny's capsule. That was from a mechanical issue in him going east and west versus going north and south. It's not like we didn't know that it was happening, but he just signed a big contract and had to pitch. Eventually the rigors of pitching got to him. We were never made for overhand sports. It's just an occupational hazard sometimes."

"That was a bit of freak of nature.You see a lat strain sometimes but you don't see a lat detraction, a retraction and a detachment often at all. As a matter of fact, he was my first one. But we certainly learned how to repair and rehab a lat."

Part of the success is attributable to how well Schneider and pitching coach Don Cooper work together. While it's the trainer's responsibility to make sure pitchers are rehabbing properly after each start, Cooper enforces Schneider's practice during bullpen sessions.

"I ask Cooper if a pitcher can handle a cutter or a slider. If I see a pitcher have a little bit of issues with those pitches, we address it right away," Schneider said. "Coop will take a look at the pitcher on the mound during games or in the bullpen and make sure they are doing everything correctly. We work hand-in-hand on this, and I think that is why our injury history is really good."

A pitcher that is on Schneider's radar is Nate Jones, who is coming off both Tommy John surgery and a back procedure. Recently, Jones was able to pitch in a simulated game in which Schneider said he was able to hit 100 mph with his fastball.

While the team is optimistic about his recovery, Jones could still be weeks away from being activated off the disabled list. According to Schneider, the plan after activation is to have Jones start his rehab sessions either in Kannapolis or Winston-Salem. From there, Jones will have to work his way back to Chicago remaining healthy and performing at a high level. This rehab timeline will stretch over 30 days, and, if everything goes well, fans could see Jones pitch again in September.

It's not just pitchers who benefit from working with Schneider. As someone who has suffered a wide range of injuries from nagging to season-ending, White Sox center fielder Adam Eaton has noticed a big difference in rehabbing from his playing days in Arizona.

"Arizona has a different philosophy on medical staff and how they approach players. Herm is very old-school in his sense of getting players ready and it works," Eaton said.

"He has been using his theories for a long time and proof is in the pudding. He keeps guys off the DL and gets them back quick on the field better than any other organization."

Before signing a five-year, $23.5 million extension this past offseason, Eaton evaluated all aspects of staying with the White Sox through the 2019 season. That included Schneider and the training staff, which was a big sell for Eaton to sign the extension.

"I got to know Herm very well starting my career [in Chicago]. I had two stints on the disabled list, one with a hamstring injury and the other with an oblique injury. Both injuries really nagged me all season so I was in Herm's office quite a bit," said Eaton.

"Before signing a long-term deal, you want to know who are the people around you and who is going to take care of you. I really enjoy working with him on a day-to-day basis and I wouldn't sign a five-year deal if I wasn't comfortable."

While watching a group of players hitting off a tee with Schneider, I asked him about how Gordon Beckham broke his hamate bone back in 2013.

Lucky for me, Schneider wanted to demonstrate. 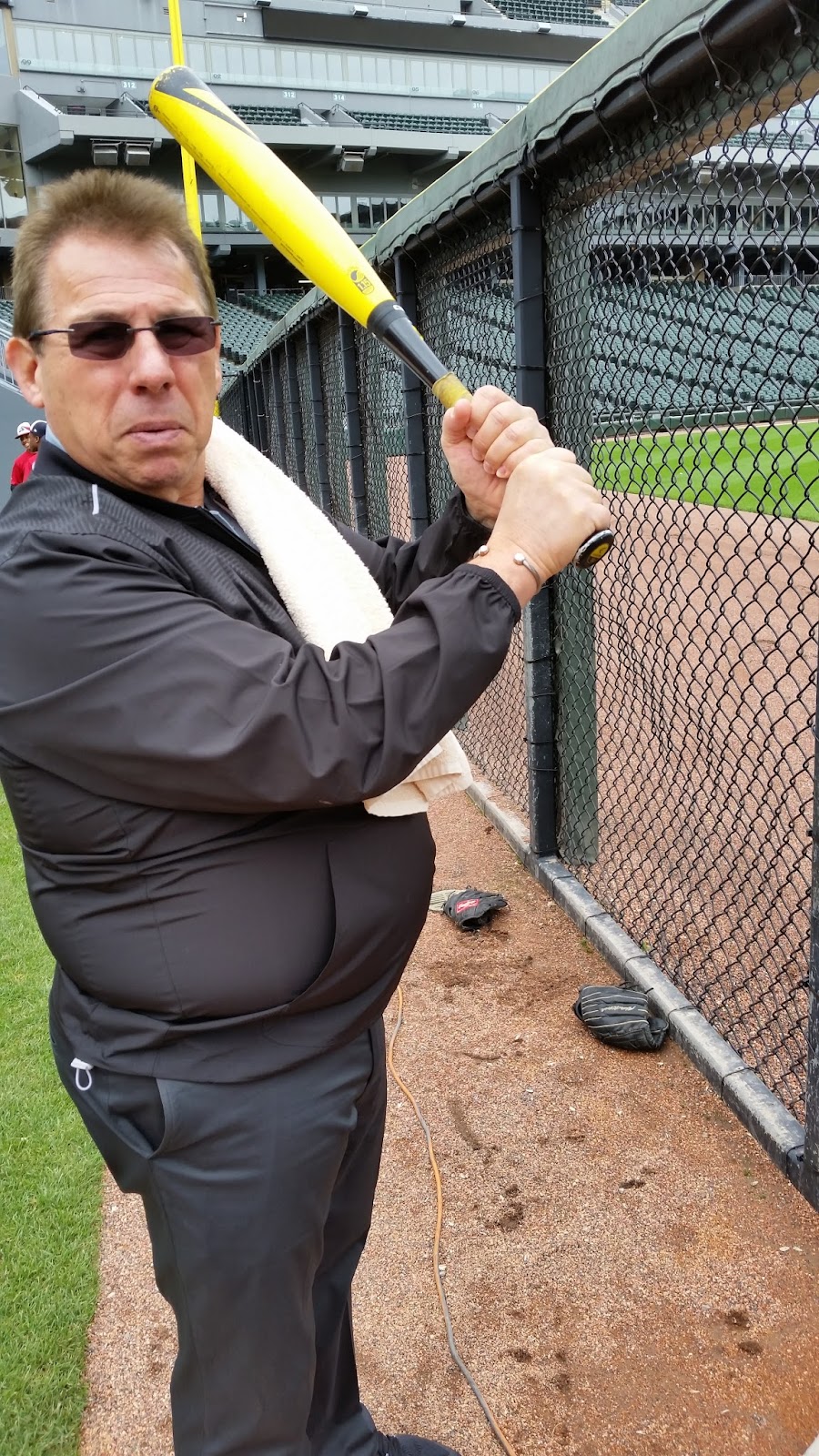 Note where Schneider's hands are on the bat. This placement is the proper way to hold a bat and will ensure that a hitter will never break the hamate bone.

Except, Beckham doesn't hold a bat like that. In order to get an extra snap on his swing, Beckham drops his hands further down the handle, clutching the knob in the middle of his hand. That placement puts pressure in the middle of the hand and when hard contact is made, could break the hamate bone.

Adam LaRoche holds the bat with the knob in his hand, as Schneider demonstrates. 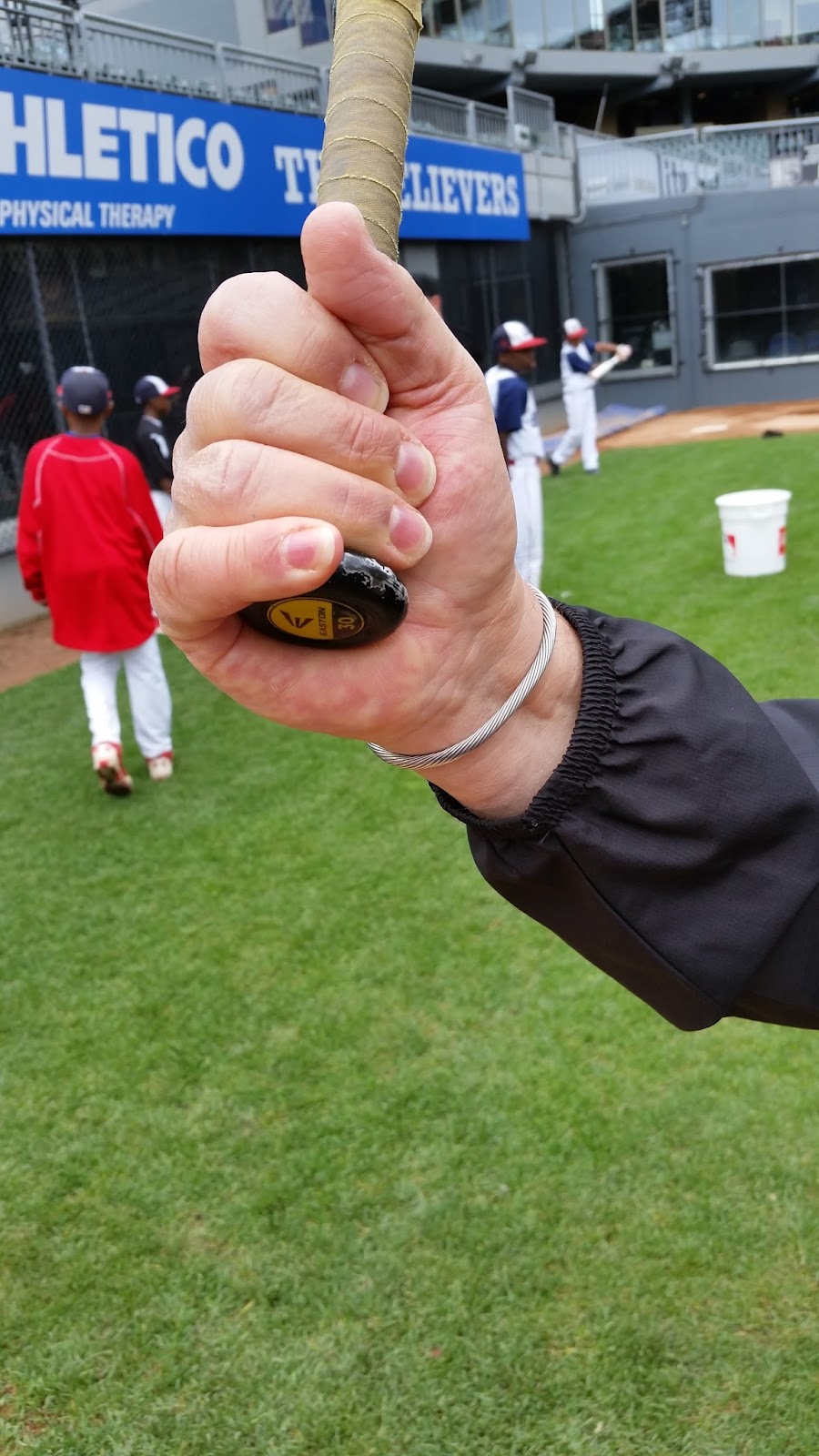 LaRoche complained about hand soreness in the beginning of the season, and according to Schneider, the soreness was in some "serious places on the hand." After performing tests, LaRoche didn't break his hamate but occasionally still experiences soreness in his right hand. Something to keep an eye on because a nagging injury like this can zap the power from a batter's swing, and could be a factor on why LaRoche's slugging percentage is below .400.