Following up: No explanation yet for triple play that wasn't

Both White Sox and Orioles expected Manny Machado to be out on interference, which means MLB has some work to do on slide rule

Share All sharing options for: Following up: No explanation yet for triple play that wasn't

One of the great things about baseball is that there's usually a game the next day.

Sometimes, though, you don't want to see an event from the day before swept aside by the next day's news.

For instance, it would've been nice to have a healthy news cycle devoted to the interference that wasn't called on Saturday night. For some reason, Manny Machado was allowed to slide past the base and grab Brett Lawrie's ankle as he angled to try turning a triple play, and yet somehow the umpires and New York review crew determined Machado neither committed interference nor violated Rule 6.01 (i).

In case you hadn't seen how slides like this previously ended in outs, Cliff Corcoran at SI.com detailed the precedents. What made it especially bizarre is that both sides thought Machado's slide deserved a triple play. We know Robin Ventura did because he was ejected for it, but even Buck Showalter anticipated the challenge to be valid:

"Where we got fortunate is they didn’t attempt to turn the ball over to first base and didn’t feel like it impacted the play, I guess," Showalter told reporters. "We’re going to look for an explanation, too, because we would have challenged that, too. When I first saw it, I didn’t think we’d have much argument. It’s a little bit of a, I don’t want to say ‘flaw,’ but there’s been some gray area in a lot of people’s minds. But the way to combat it is to not do what we did."

Alas, there isn't yet clarity on the subject. Lawrie wondered aloud if he should've thrown the ball, even if he committed an error in the process, which isn't healthy. Ventura anticipates that the rule will be finetuned ...

"Every rule we’ve had has done that," Ventura said. "We’ve always had some unique plays that happen that end up changing if they look at it further. It makes sense that would go along those lines."

... and he knows how that goes. Two years ago, he was ejected after protesting a pretty sketchy implementation of Rule 7.13 in San Francisco, which was later adjusted to allow the play he was thrown out for arguing. At least it led to this iconic photo from HSA. 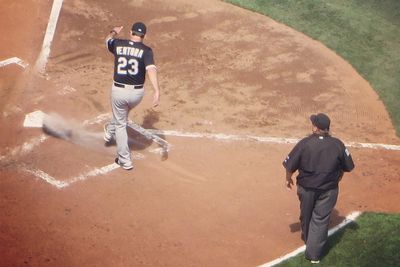