Suddenly, these White Sox are made for walking

Share All sharing options for: Suddenly, these White Sox are made for walking

Let's get this out of the way: One Erik Johnson start later, the fifth starter situation remains murky as ever. He was optioned to Triple-A Charlotte after Thursday's game, with a corresponding move coming later today.

My initial guess is that Johnson is making room for a reliever, since Robin Ventura used up the front end of the bullpen and Mat Latos isn't a great bet to get into the seventh inning himself. After that, it'll be Miguel Gonzalez.

As for who gets called up in the interim? Nobody of consequence is my guess, since Jake Petricka and Daniel Webb are on the DL and Tommy Kahnle is already in Chicago. It could be a 40-man guy like Michael Ynoa, although he's not one likely to absorb multiple innings if needed. I floated the idea of Brian Clark on the podcast. He's lefty, he can go multiple innings, and he's having a good year in the Birmingham bullpen when the Sox could still be exploring his potential as a starter.

And maybe I haven't even identified the correct pitcher, so I'll refrain from diving any deeper now. Once the pitching staff approaches anything resembling full strength, though, I'd like to see a two-start minimum for any candidate, if only to diminish the smell of desperation, which is stinky cologne.

For the time being, remember when we were concerned about where the White Sox' walks would come from?

One month into the season, the answer is: A lot of different sources.

The Sox validated such worries through the first four series of 2016, as they averaged just 1.9 per game against Oakland, Cleveland, Minnesota and Tampa Bay.

After receiving a whopping nine free passes from Red Sox pitching on Thursday, the Sox have averaged 4.47 over the 17 games since, including 25 over their four games in May alone. That's already a third of the way to their April walk total (74), which would've been the second-most productive month for walks last year.

It's especially striking on an individual level.

Last year, the White Sox were 14th out of 15 AL teams in walk rate. The top team: Toronto at 9.2 percent, which is the same rate at which the Sox are walking this season. This season, that's only good for fourth among AL teams, but it's still a massive leap from last season.

And Brett Lawrie of all people is leading the charge. He drove into the hydrant and caused all these walks to spray out:

This has come out of nowhere, because Lawrie only walked 28 times over 149 games for the Athletics last season. Through one month of 2016, he's on pace to triple that total with plenty of room to spare.

The underlying numbers support this transmogrification. He's cut his chase rate by 10 points (37 percent to 27 percent), and it shows up in his heat maps. Check out his swing charts from Brooks -- 2015 on the left, 2016 on the right: 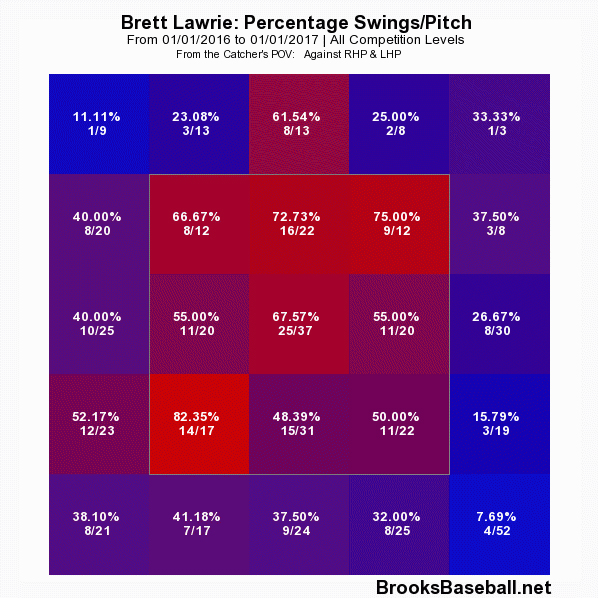 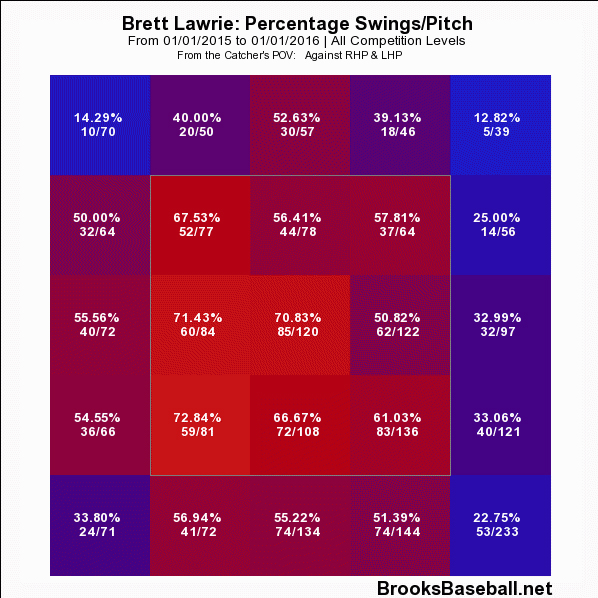 Studying the shifting red blobs, Lawrie seems to still prefer the ball inside, though less than last year. The big difference? He's laying off more low pitches, and not expanding the plate so much on the other side, either. This explains why, besides the massive change in his walk rate, he's also hitting far fewer grounders than before (49 percent in 2015; 36 percent in 2016).

Pitchers may be playing into this. His walk-to-strikeout ratio disintegrated last season, which happened to be the same time he saw far fewer fastballs. During his Toronto career, pitchers threw him fastballs about 56-57 percent of the time. With Oakland, he saw fastballs only half the time, with many of them replaced by sliders.

Yet one month into his first year with the White Sox, his pitch mix is back to where it used to be, more or less. You could say this is why he looks so comfortable.

But when I look at his charts during this walk surge, it's possible that he's the one forcing pitchers to come back to him. When they throw him stuff low and away, he's not biting:

This is extremely cool to see, and also slightly unsettling, because it's not often that hitters become far more selective when joining the Sox. Maybe this is one time where a change of scenery resonates, whether mentally or physically, since U.S. Cellular Field is less imposing than O.co Coliseum. Maybe it's because he found the pump-up song that the whole clubhouse agrees upon.  Or maybe it's the unusual mouthguard, which prompted Jason Benetti to call him "Canadian Dracula" (I'd need to see more denim).

Whatever the case, it's funny that the player best known for his balls-to-the-walls intensity and unstoppable energy is making a name for himself with restraint.