Is White Sox ace having great start to season because of change in pitch selection, or in spite of it?

If you follow me on Twitter you know that I spend every Chris Sale start these days loudly complaining that he doesn't throw enough changeups. Various acquaintances can testify I also do this out loud in person if you give me the opportunity. I don't like this new "pitch-to-contact" version of Sale and I don't think he's making trade-offs in his approach that make him a better pitcher. If the point is to trade K's for getting deeper into games, it's not working.

I take issue with how much Sale futzes around with his velocity game to game, but the lack of the change in 2016 is what's really getting to me. Sale's changeup is the only off-speed pitch that really looks like his fastball out of his hand, especially to right-handed hitters. As a batter gets deeper into a count against him, it becomes a pretty reasonable strategy to sit on the fastball, particularly after a slider. If he's wrong, he's got a decent chance to recognize the pitch out of the hand and if he's right, he's geared up for the right pitch. Sale fortunately works in and out with the slider, so he's not giving away location, but he's giving far too much chance to batters he should just bury.

Or at least that's my theory. So let's at least look at some graphs and see if there's anything to it. I pulled every pitch he's thrown since 2014 through his June 10 start and plotted the likelihood that it was a changeup w/ ggplot's loess smoothing. The first dashed line is the start of the 2015 season, the second is the start of the 2016 season. He's throwing far fewer changes in 2016 and it looks like this is possibly an extension of something he picked up on in late 2015. 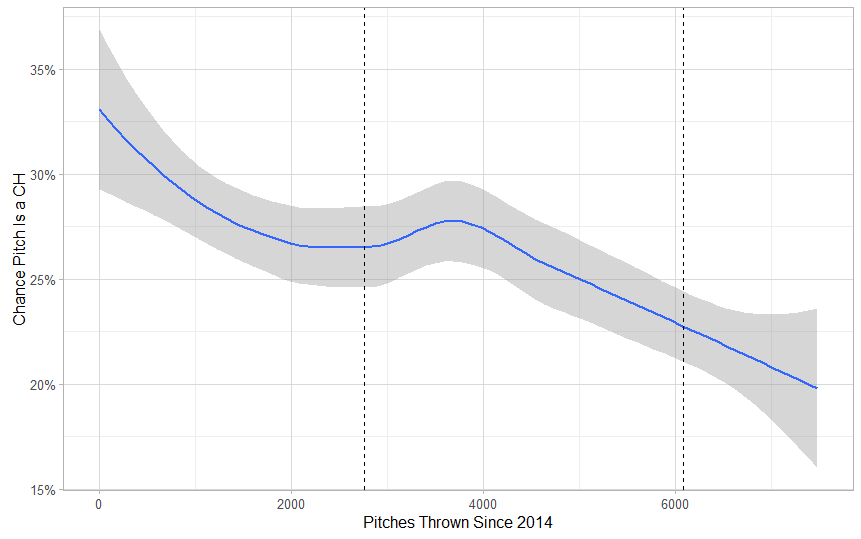 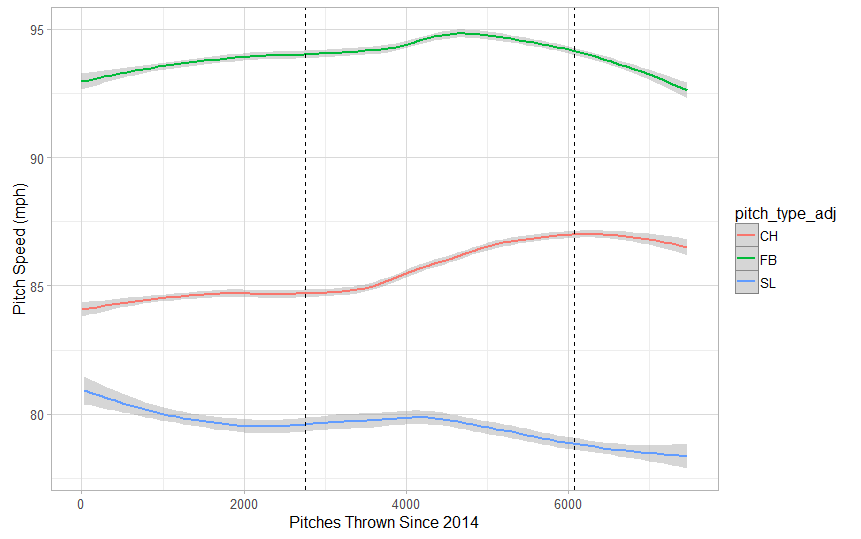 I should probably note that I combined all Sale fastballs into one category. I'm of the opinion that he doesn't throw a four-seamer and a two-seamer, he picks a velocity band for that game and that's the fastball he throws that game. And as a general disclaimer, especially given how much Sale can change his velocity game to game, categorizing changeups vs. fastballs can sometimes be difficult. So I don't take this methodology as the last word. But it feels accurate enough to me.

Interestingly, Sale is getting clearly less separation in velocity between his changeup and his fastball. And the difference in velocity between a pitcher's changeup and fastball is crucial to its success. Dave Allen has shown that there's an evident sweet spot for a pitcher's change. Intuitively this makes sense, since a pitcher is trying to keep the pitch off the swing plane of a batter swinging at a fastball.

If separation is a big deal, maybe Sale is throwing an objectively worse pitch in 2016 than he has in the past. It sure looks like it to me: 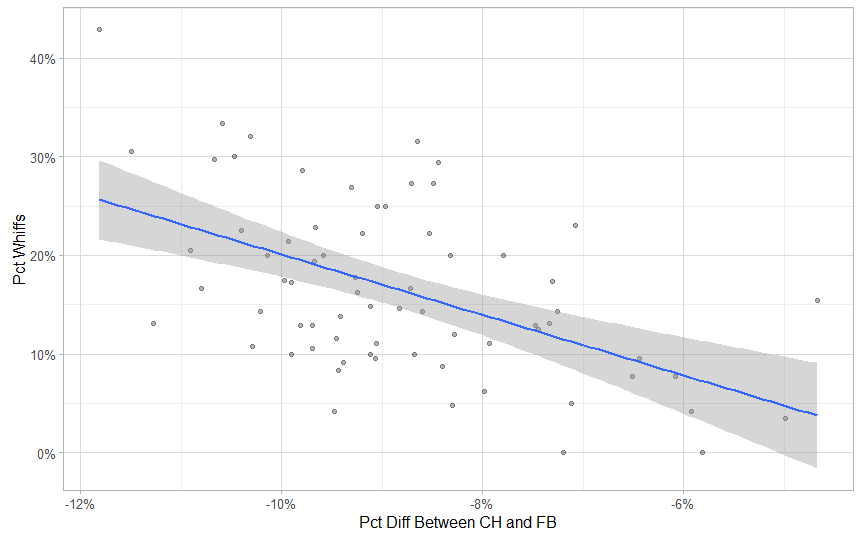 This is a plot of the average separation by game of Sale's changeup from his fastball, and the percent of changeups that batters swung at and missed. So it's slightly different than Allen's run-value approach, but it's pretty clear there's a sweet spot for a Sale changeup. And in 2016, he hasn't been in that sweet spot: 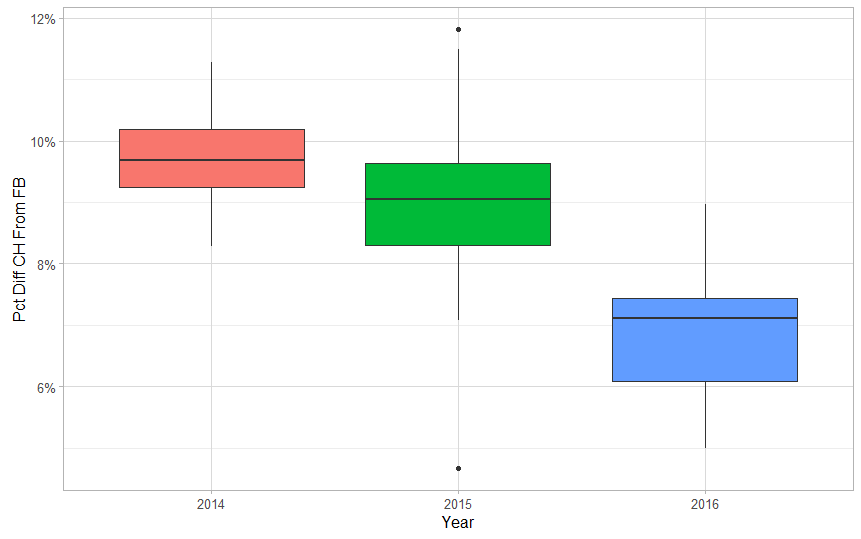 I expected to find going into this that the difference was Tyler Flowers. I always really liked his game calling and assumed I'd be able to find major sequencing differences between Flowers and the Avila/Navarro combo. And they do exist. But if Sale is choosing to throw a worse pitch (or has lost some feel for it), then calling for it less is just rational.

My perspective is that this is all part of Sale making an extreme choice in his pitching style to favor contact over whiffs. So far, though, he hasn't been hurt enough to convince himself he should make a change back. The results are certainly not bad, but, as pnoles pointed out, there's no difference in his per start longevity. And he's still throwing ~107 pitches per game like he did last year. So why bother?