All baseball seasons are long, but rebuilding seasons seem extra long. The micro doesn't matter nearly as much as the macro as we're more interested in things like the development of young players than the outcome of individual games. Sure, losses and errors are painful but the season-long processes matters much more than the daily results.

It also give fans plenty of time to stew on the more esoteric facets of the game. I'd guess that 85% of my baseball viewing is the White Sox, so my sample size is quite skewed but it sure seemed to me that the White Sox were really lagging in terms of running game value.
(At this point let me make sure I clearly define "running game". I consider the running game in this context to be the success/failure of stolen bases. Baserunning includes the stolen base attempts along with the advancement/elimination of baserunners contingent on a batted ball whereas the running game is solely a function of stolen base attempts.)
It sure felt like there were a ton of times the Sox would just let a runner stroll into second or third base uncontested and the Sox themselves didn't seem to be all that relatively successful in their limited stolen base attempts. It would be nice to know if it's just my familiarity bias with the Sox that leads me to think they're bad at the running game or if they actually are subpar.

Luckily we live in a well-quantified baseball universe and the answer is a few data tables and lines of code away.

First, how do we quantify the running game? Every action in a baseball game has a run value (Background: http://www.tangotiger.net/RE9902event.html and http://www.fangraphs.com/library/principles/linear-weights/). Knowing the run values for stolen bases and caught stealings we can determine a team's running game run value.

Voila! Total team running game value. Here's all of that in equation form:

Grabbing 2017 team stolen base/caught stealing and run value data from Fangraphs, here's your 2017 running game value table (as of the morning of 7/22/17):

Hey, what do you know! It's somehow worse than I thought! So far this year about 10 runs equals a win so the Sox have lost an entire game just due to the running game. To be honest when you think about in that frame it's kind of stunning how bad that is.

Well, it's pretty much both column A and column B. They have the lowest positive contribution by nearly a run and a half and the sixth largest negative contribution. Two bottom 20% contributions add up to the worst overall running game by almost three runs.

So how bad is this in a historical context? Extrapolating out the Sox' performance through 93 games over a 162 season the expected running contribution is -19.3 runs - almost 2 additional losses due to the running game. Here's a look at the frequency of team running game values since 1969, with the projected 2017 White Sox indicated with a dashed green line: 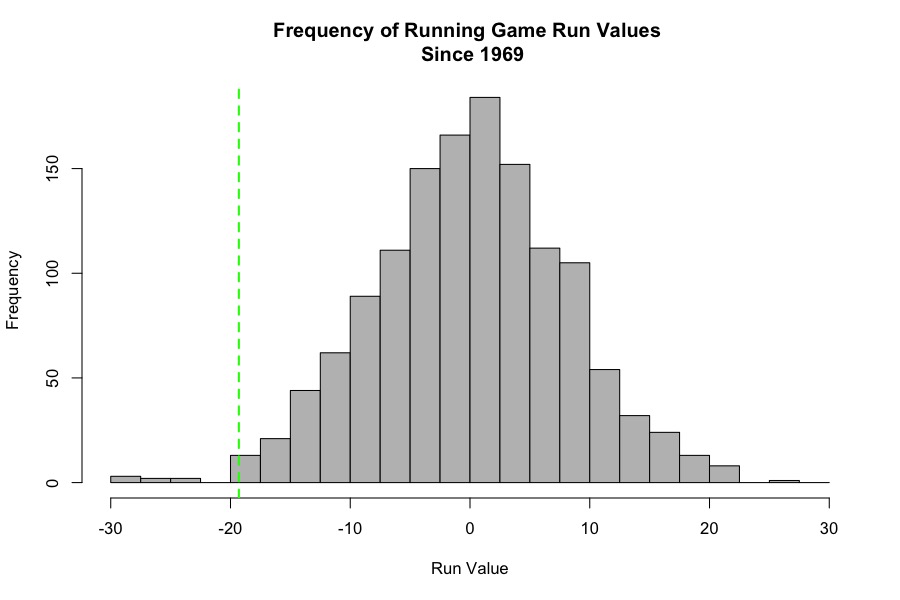 Unfortunately this season appears to be just another chapter in a recent history of the White Sox not gaining any value via the running game. Here's a look at their running game run values since 2000: 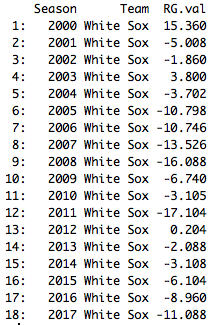 Aside from the 2000 White Sox (who were really good at the running game) 15 of the last 18 years are below zero. While some teams can justify a negative value running game (looking at you mashing White Sox of the early-to-mid-2000s) middling teams can't be losing a game or more a year by continually letting Lorenzo Cain stroll into third base barely contested or by seeing someone with Tim Anderson-like speed only tallying digit stolen bases.

For the 2017 White Sox does having a historically bad running game matter? No, not particularly. But could the 2006 White Sox have used an extra 11 (or more) runs? Definitely! In the big picture a swing of 10 runs over a season due to the running game is roughly on the same order as other secondary contributions such as pitch framing and lineup optimization. So while it's not a main contributor to success it would be nice to see the White Sox be consistently better at this facet of the game within the game.

Shingo's Cheeseburgers works in reinsurance research and development in Minneapolis, Minnesota. He likes going to Twins games but is not a Twins fan.