Lucas Giolito and James Shields look ahead to 2018

Share All sharing options for: Lucas Giolito and James Shields look ahead to 2018

The White Sox have one full turn through the rotation remaining, but Lucas Giolito and James Shields won’t be in the mix over the last five games.

Rick Renteria and Don Cooper let Giolito finish his season on a high note with seven innings of one-run ball against the Royals. which brings him to 174 innings on the season between the minors and majors. That’s a big-but-responsible increase from the 137 he threw in 2016, and from here, he’ll be able to hit 200 should both health and talent allow.

Giolito’s season is a point for scouting the pitcher over the numbers. Those who were watching him reassemble his game at Charlotte weren’t rattled by his rickety Triple-A numbers and ordinary velocity, and that faith was vindicated.

I don’t know if anybody was expecting that kind of immediate success in the majors. Giolito might have surprised even himself, given his honest self-assessments after his Charlotte starts and his initial review of his first stint with the White Sox:

“This was such a crazy year,” Giolito said. “I started not the way I wanted to. I had to kind of get over some trials and tribulations down in the minor leagues trying to fix some things, trying to find myself and see who I was as a pitcher.”

He ended up throwing five quality starts in seven tries, and the ones that fell short of that standard were still decent outings, just undermined by first-start nerves or an awful strike zone.

He could have tried to get to 180 innings against the Indians, but the Sox didn’t see much of a point. As Don Cooper put it:

"There's nothing left to prove this year. There's nothing really to gain. I don't think his first trip to the big leagues with us could have gone any better," White Sox pitching coach Don Cooper said. "He's throwing strikes with four pitches. He's got angles, he can change speeds, he can ride the ball up in the zone. He's done everything. He's been great."

As for Shields, the Sox let him call it a season after picking up a victory over the Angels in the series opener on Monday. He had platelet-rich plasma injections to address tendonitis in his knees, so he’ll finish his season with 117 innings and a 5.23 ERA that doesn’t quite capture his performance.

For Shields, you can separate his August and September performance from the rest of the season, as that’s when he started dropping down in an attempt to get through the season. It worked.

Shields downplayed the radical nature of his transformation by saying he returned to his natural form ...

... but that’s kind of a lie by understatement. There’s nothing like this in his PITCHf/x history, which covers all but his rookie season. There’s this from Brooks:

... and the in-season shift from Baseball Savant. 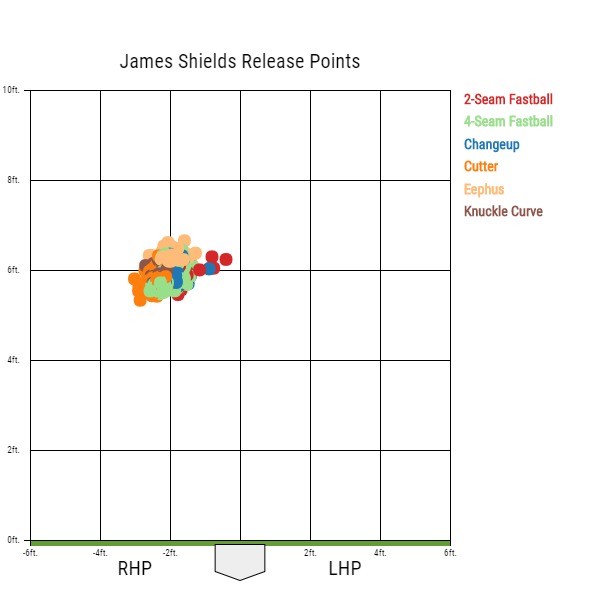 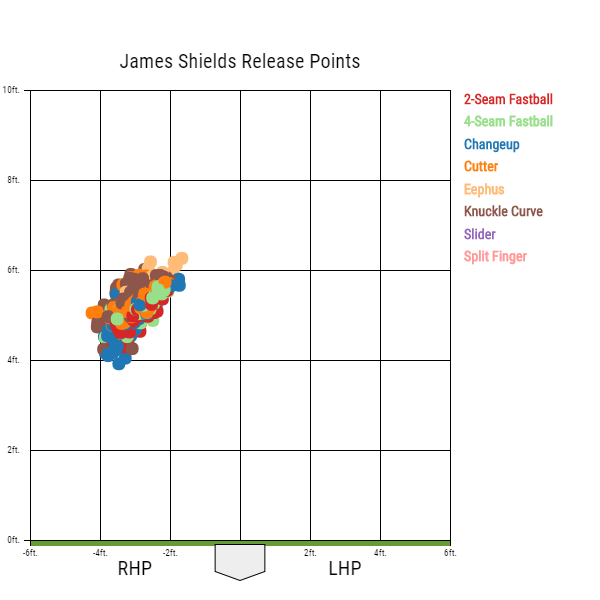 Release point before Aug. 1 (left) and after.

That’s different from anything he’d done before, and it worked well enough. With Giolito’s smashing success and Shields’ satisfactory second act, the White Sox have two fewer rotation spots to worry about when Opening Day rolls around in 2018. These late-season results might not guarantee future success, but it only took the slightly pessimistic outcome to think either pitcher wouldn’t deserve saved seats.

With Giolito and Shields done, the Sox haven’t yet determined Friday’s starter, but they have a plan for the rest of the remaining slate. Reynaldo Lopez will start tonight against the Angels, followed by Dylan Covey on Thursday. After the TBA on Friday, Carson Fulmer will test his blister on Saturday, and Chris Volstad will go in the season finale.